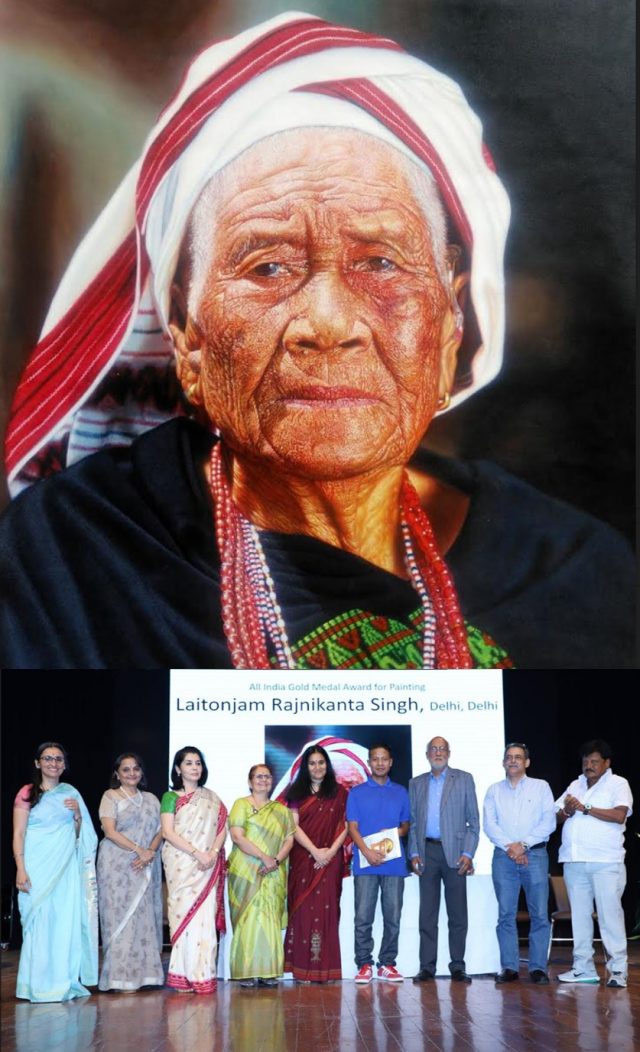 Laitonjam Rajnikanta of Bishnupur is an emerging talented artist who loves to put down all his thoughts and emotions in the form of painting.

Rajnikanta was born in 1984 in Ward No 9, Bishnupur of Manipur. Since childhood, he started liking the art of painting and started learning painting at the age of 7 from a local Guru; Ningombam Korouhanba.  He completed his B.F.A. (Painting) from College of Visual Arts, Kolkata, in the year 2012. Further, he continued M.F.A.(Painting) in I.K.S.V.V. Khairagarh, and completed his study in 2014. After completing his studies, he started working as a Member of an art group in Mumbai and made paintings, fiberglass, stained glass, mosaic, and metal works during 2014-15.

In 2016, he joined Lalit Kala Academy Centre, Gari New Delhi and worked hard with fellow artists as freelance artist. I met him there in Gari during those Delhi Summer days. When I saw his works, it hypnotized me, all his brush strokes were clean and striking. I have seen him struggle to excel in his work. As a painter it is very hard to survive the art market, as the competition is too tough. But it doesn’t deter him to follow the path of famous figures like Van Gogh, Pablo Picasso, Jackson Pullock, MF Hussain etc.

There is no language barrier for a painter; he can reach to any audience through the art. With the vision or dream of becoming one of the greatest artists in the world, Rajnikanta is working day and night.

He has participated in many group exhibitions and art camps, nationally and on international level. The world of art has started recognizing his amazing talent.

He loves to paint on canvas using acrylic as well as oil colours. Currently he is working on – Oil on Canvas Medium.

Lately, his work-“Mesmerizing Beauty” has brought him good fame: this work has been selected by 9th Contest FIGURATIVAS-2017 and acquired by Art Museum at Barcelona, Spain for an amount of 3,000 Euros i.e 2,42,000 INR

The same has been Awarded Gold medal in “ALL INDIA Gold Medal Award for Painting” organized by Prafulla Dahanukar Art Foundation in December 2017. A cash prize of 1,00,000 INR was presented to the artist. Hope this painting will take him further in the path of success.

He can be connected at Rajnikantaart

This article is being submitted by Sairem Romen Kumar