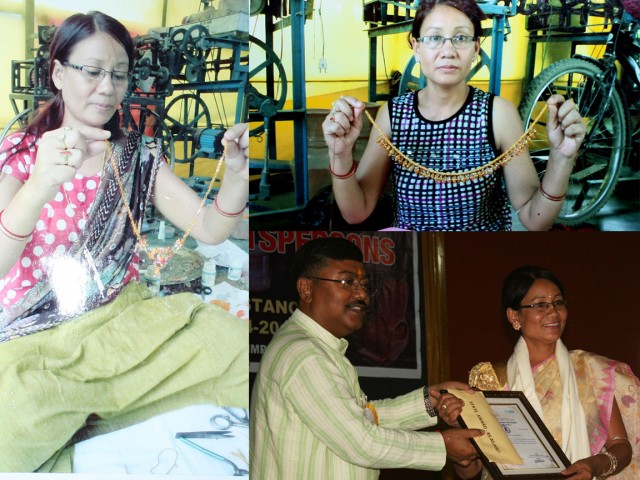 Manipuri Handicrafts occupies a unique place among the various crafts of the country due to having its own aesthetic and artistic value created by the talented Artisans. Among the crafts, making ornaments out of silk cocoon has also been a unique and thriving craft in the state. Shrimayum Gira Devi of Khurai Thongam Leikai is an innovative craftsperson in Manipur who successfully takes up the craft of making varied designs of lady ornaments like erring, necklace, rings etc under the brand Leima Liklang Nayin.

Background behind cocoon made Leima Nayin

In the historical period, the coahuiltecan tribe in Monterrey, Mexico made necklaces with cocoons. The tribe considered the ornaments made out of cocoons a luxury they could afford. Indigenous communities in Africa and South America too made anklets and necklaces from cocoon. In Manipur, sericulture practice using mulberry leaves had been a tradition since ages. Since early times, Manipuri women are known to have made ornaments and trinkets made from different forms of metals like bell metal, copper alloy and silver. Nayin, a type of earring used by the Manipuri women, was usually made of copper or gold. Based on the designs worn by the Manipuri women in early times, the innovative Artisan attempted to experiment with Leimatil silk cocoon to make various ornaments.

Nayin is a traditional earring for the Manipuri woman. When the ornaments are made using the Kabrang silk cocoon, it then is known as Leima Nayin. The name was derived from the sayings connected with silk weaving using Kabrang cocoon obtained from Leimaram or Khurkhul village.

In Leimaram it was said that the particular type of cocoon came to be known as Leimatil after the popular belief that the Leima or princess was born out of the Kabrang cocoon. In Khurkhul village, it was said that in the ancient times, the king’s daughter who was married and settled in the village died. The worm that emerged out of her grave was observed to feed only on the Kabrang leaves and hence it came to be known as Kabrang til. As the dead of princess, the worm also came to be known as Leimatil. Later the name was coined as Leima Nayin as the cocoon was formed by the worm coming out of the princess grave.

Learning of making ornaments from cocoon

Innovative Artisan Shrimayum Gira Devi, 37 years   wife of Keithellakpam Ibochou, a resident of Khurai Thongam Leikai learnt the craft of making silk cocoon based ornaments once she along with 20 sericulture workers from Manipur took part in a five days training programme at the Central Sericulture Research and Training Centre in Mysore in September 2007.. The trainees were taught as to how to make cocoon based ornaments and garlands. After joining the training, she was highly motivated that she initiated her craft in making various ornaments out of cocoon.

Gita is associated with the Non Government Organisation Sericulture Potlam which focuses specially on the promotion of both traditional and conventional sericulture practices and products.

Focusing on the traditional values and with a thrust on innovation, Gita Devi has strived to bring out design products those appeals to her customers for their aesthetic and traditional values. Her gifted skill is evident in the manner in which she had crafted the erring Leima Nayin out of silk cocoon with an eye on the potential local market.

Her Designs of Ornaments

She was confident that the low priced, attractive and feather light ornaments would fancy with the women. Even when the ornaments become un-fancied, redundant with the wearer, it would be much easier to dispose of these low priced ornaments.

“In ancient Manipur society, ornaments like Nayin (erring), Liklang Pareng (necklace), ring and bangles were mainly used by the princess, queens and wives of the nobles in the royal palace.  Now these luxury items have been widely worn by the Manipuri women during occasions like seasonal festivals, marriage ceremonies, Lai Haraoba, dance and music. As desire of man is limitless, the designs of the ornaments have to be made to meet the changing human desire from time to time. The cocoon based ornaments are made at such a low priced that everyone can afford.  The ornaments are made with dyed cocoon, ornamental stones, fabric art colour to attract the buyers”, she said.

Initially, there were hardly any takers for those ornaments made of cocoon. She, however, persisted with her purpose and soon began making ornaments and decorative items for woman out of dyed cocoons. Today, her products are in high demand in the markets. Attractive and low cost in pricing, Gita’s innovative design products has paved the way to success for her and her two children.

She bagged inspirational award in the competition held on 17th October 2013 for selection of outstanding craftsperson of Manipur in the handicraft section jewelry for the year 2013-2014 conducted by directorate of commerce and Industries, Government of Manipur. Recently, Manipur Government honoured her by conferring state craftsperson award in recognition of her work in the craft.