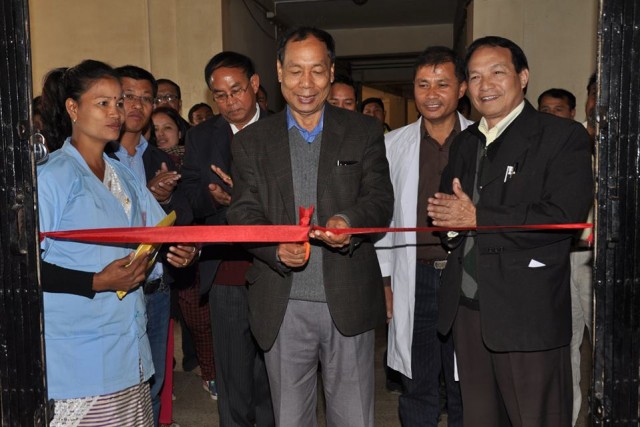 With the posting of 13 Doctors including specialists’ doctors in the field of Surgery, Pediatricians, Anesthesia, Medicine and simultaneous up gradation of infrastructure, equipments, operation theatre at Sub District Hospital Moreh became operational on 14th February 2014.

The Director along with his team of specialist’s doctors and nurse conducted the first surgery. Athung gave birth to a baby boy at around 1 pm and the baby was looked after the pediatricians. The baby weighs 3.4 kg and is healthy. He was kept in the warmer and given necessary care when the mother was under post operation care.

“The step has been taken up as people of Moreh faced difficulties. It is a historical day of Moreh, from today on people of Moreh can have the service of operation at the hospital, they do not have to rush to Imphal or Tamu for getting an operation done. I personally did the first operation with my team, the rest of the operation will be conducted by the doctors at the sub district hospital. Specialists’ doctors are here to serve you and everyone should access the service here. For people living in the far flung area one can dial 102 for ambulance for transportation at free of cost to reach Moreh Sub District Hospital for operation. Today’s operation was conducted free of costs, and same will follow for the safety of mother and child.” said the Director just after the successful operation that brought smile to the family members of Athung .

Myayanglangbam Thoiba president of Meetei Council Moreh expressed that it is a very proud moment for Moreh. The facility is a boon to the poor people as going to the nearest facility of Tamu, Myanmar for operation was expensive for many. He also expressed happiness as the Director has given order to recruit 9 nurses from Moreh town which will help in running the hospital round the clock. The irregularities of service when staffs posted from far distance took leave will be solved he maintained. The facility here will help a lot. Live is valuable and the Direcctor’s deed is great he concluded.

The director also expressed that repairing for the hospital including the toilet facilities and water supply will be taken care of for improvement. With efficient running of staff quarters the hospital will be made actively functional like JNIMS in Imphal East. It is of course efficiently functional from today onwards he expressed.

On a journalists query about the outbreak of swine flu in India, the director expressed that, “Swine flu has taken away so many lives in some States. It can reach here in Imphal as well, since the air traffic is high. To prevent from any outbreak we have open up Swine Flu cell in all the districts. If anybody wants to get information on Swine Flu it was published in the newspapers. When a person is infected with Swine Flu, Tami flu could be administered for curing the patient. We have imported the medicine from Hyderabad as it is not available in the open market and medicines are kept in full stock with the department now. If somehow had severe cough with diarrhea, vomiting, tiredness prevail leading to collapse it could be swine flu. One should bring the patient to the nearest health center for treatment with the Tami Flu medicine. We could save the patient easily, if Tami Flu is taken. We are prepared there is rapid action team. We are providing the medicine free. If the sign and symptom prevails one should take the throat swap and go for test, if the patient is serious we can even take precautionary measure by starting the treatment.”

Soukhulun Baite of Hill Tribal Council said that the opening of operation theatre is a special occasion; I on behalf of the local people would like to express happiness. The measure taken up by the Department and Director will subdue the misery of the Moreh people. We will lead the entire people who do not know the facility which is opening here. Those who are suffering, we will tell the people not to rush to Tamu and directed the people here at the Moreh Hospital. We are proud before our Myanmar friends that the facility is available in India, at Moreh