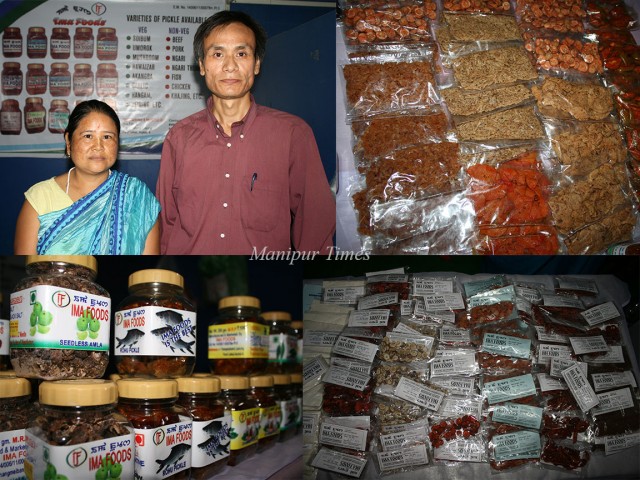 Gurumayum Devakinandan and Gurumayum Ongbi Sanatombi started their business journey by opening up a small grocery shop at their residence located Thangmeiband Lourungpurel Leikai. The grocery business failed to give them much profit and support that can comfortably run a family with two kids, Sanatombi once urged her husband Devakinandan who had earlier undergone food processing training under District Industry Centre to start a business on food processing and teach her how to prepare pickles and candies so that she can start a business by preparing pickles and selling them to the costumers. Devakinandan shared with his wife all the technological knowhow and inputs he knew about preparation of pickles and other food products.
In 2006, the couple invested Rs 1000 and prepared varied fish pickles under the brand name of Ima Food. They sold the products to their relatives and friends on trial basis for the first time.
Ima Food first packaged and branded feremented fish in the state. Nowadays, many food processing farms are packaging such food items, said Devakinandan Sharma, proprietor of Ima Food, whose father Nandalal Sharma was also a food technologist in horticulture department.
“Our business was thriving at a time when the products of Ima Food were on demand. With many food processing industries mushrooming in the state, growth of our farm have reduced these days. Nevertheless, we are putting all out efforts to restore the popularity and support of the customers with quality products of special taste and flavor”, said Devakinandan.
Ima Food include pickled items such as fish, Chicken, Pork, Beef, Ngari, Thumyakpi and Khajing and Khajing for non vegetarian groups and Soibum, Umorok, Mushroom, Hawaijar Akangba, Garlic, Hangam (Mustard), Olive, Heimang Makup, Heitup, Heiku, Mange, Heining, Morok Atekpa (fresh Chilly) for vegetarians.
The couple has participated in many food festivals, exhibitions including Manipur Chinjak festival, Manipur Sangai Festival and others during which they could promote their business with good profit.
He said that he could fetch ten thousand rupees on the first day of First Manipur Chijnak Festival in 2008 and two lakh rupees during the second Manipur Chinjak festival.
With only one thousand rupees, we started the business by procuring raw materials from the local market. Initially, I did not have the knowledge of preparing pickles. However, my husband who is well trained in food processing under Economic Development Programme of District Industry Centre guided me in preparing pickles.
The products of Ima foods are made available in many local shops located at Singjamei, RIMS road, Lilong, Konung mamang, Porompat, Lamsang and others. Sometimes, the products reach Guwahati, Delhi and other cities. Manipuris living outside use to demand products of Ima foods, said Sanatombi.
So far, the couple have not received any financial assistance or loan from the government and bank. With some amount borrowed from the local private bank and local money lenders which use to charge them high monthly interest, they have been running the business.
Ima Food provides employment to at least six local women who are engaged in the work of processing and packaging of the varied pickle and candy items. Though the couple is willing to expand the business, they are yet to materialize their dream due to financial constraints.
“I have approached the banks to give loan so that I can expand my business. However, banks are not willing to provide us any. On the other hand, both the government and banks are wasting huge money by giving loan to fake entrepreneurs. Government is not sincere in the work of promoting the local entrepreneurs. If the financial grants or loan are provided to the intending genuine entrepreneurs who have good work culture, the entrepreneurs in the state can expand their business”, he said.
Strengthening entrepreneurial spirit is the need of the hour for an economically backward state like Manipur. Coming up with more dedicated entrepreneurial ideas that would provide jobs to many jobless youths would be instrumental in minimizing the unemployment problem, a problem faced by the state government, he observed.
“The reason behind why I wish to expand my business is not profit oriented, but to contribute to the economy to some extent by giving employment to some jobless youths”, he added.