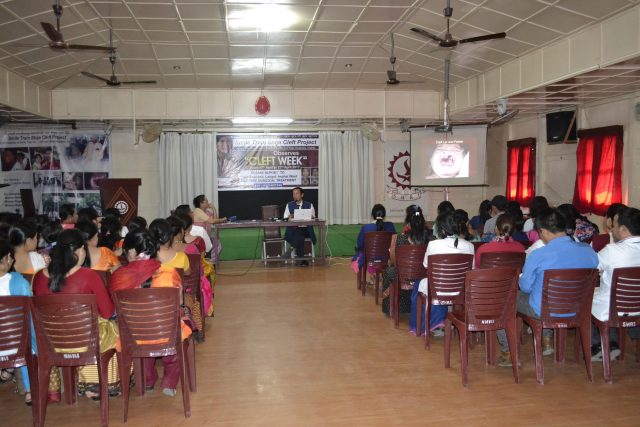 Imphal, April 18: As part of the one week long ongoing cleft week observation scheduled from 17th to 23rd April 2017 throughout the entire north eastern states of India, an awareness program for teachers on free corrective surgery for cleft lip and palate under Smile Train Shija Cleft Project was held today at Shija Hospitals. The program was jointly organized by SSA. State Mission Authority, Manipur and Shija Hospitals.

Shija Hospitals is also a partner hospital of The Smile Train and has been rendering free surgical treatment for cleft lip and palate under Smile Train Shija Cleft Project which was launched on 10th of June 2006. Smile Train Shija Cleft Project also ensures that its benefit reaches to the masses of North Eastern part of India and even the neighboring country of Myanmar. Mission Barak, Mission Nagaland and Mission Myanmar are some of the initiatives that have been undertaken till date. More than 3500 free corrective surgeries have been performed so far under this project which includes Manipur, Nagaland, Assam and Myanmar. Apart from free corrective surgeries, other additional services include free diagnostic facilities, hospital accommodation, speech therapy and travelling allowance up to a permissible limit. Cleft lip and palate surgeries can be performed from the age of 6 months and 14 months respectively and there is no upper age limit for the corrective surgery.

However many children born with such birth defects have not availed of this facility simply due to lack of awareness. With a population of nearly 30 lakh, it is estimated that around 5000 people are suffering with such birth defects in Manipur. Dr. Kh. Palin appealed to all the teachers who attended the function to kindly extend all possible help in disseminating the information about Smile Train Shija Cleft Project which is an ongoing project to the entire populace of the region.