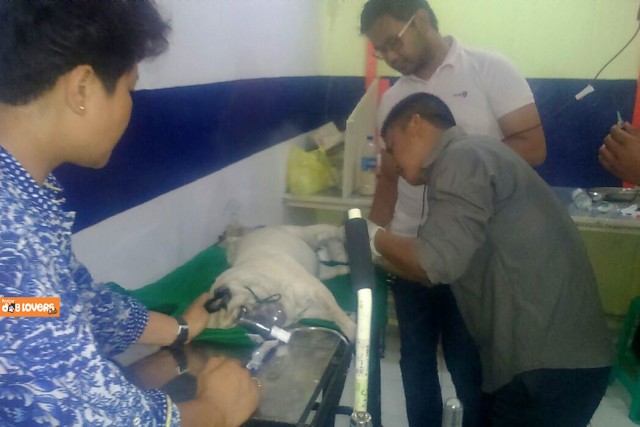 You have heard about human blood transfusion but what happens when animals like dogs need blood. For the first time in Manipur, a group of veterinary doctors from Claws & Paws, Keishampat has successful transfused blood from a healthy dog to another dog on Monday.

“The owner had been feeding grapes to the dog which is known to be nephrotoxic. It was never dewormed since birth”, said Devkishore. During laboratory examination, it was found that Dobee’s hemoglobin was 5/1 gm % only, TLC- 22730/cu.m, PCV – 13.5% MCH- 24.7pg. The dog needed immediate blood transfusion as there was high chances that her condition may worsened.

“Timely intervention from members of Manipur Dogs Lovers Club, Ronel Seram and Jayananda Angom helped us reach out to Tony Sharma of Mahabali Mamang, Imphal east who cooperated with us and donated his pet’s blood”, said Devikishore.

Rambo donated Dobee 40ml of his blood. “Utmost care has to be taken during transfusion considering the possibility of hypersensivity, which could be controlled by appropriate symptomatic treatment”, said the doctor. Dobee’s health condition is said to be stable.