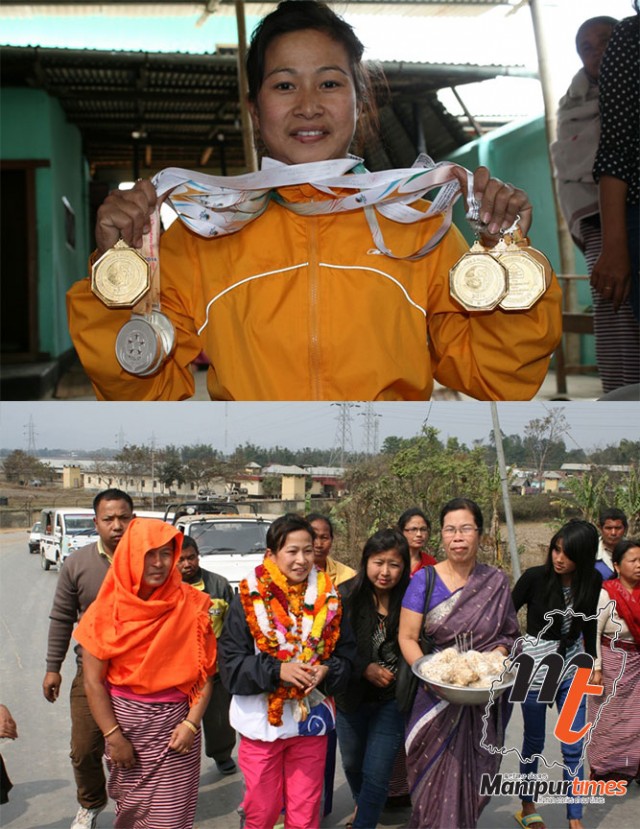 Born to late Yumlembam Sanatomba and Yumlembam Ongi Jamini Devi of Keirao Awang Leikai, Yumlembam Sapana Devi (22 years) is a budding Wushu player who has won many medals in national level and international championships to her credit. Recently, she has clinched Gold Medal Wushu Changquan in the recently concluded 35 the National Games conducted by Indian Olympic Association held in Kerala.
Earlier, Sapana Devi grabbed one gold medal and three silver medals in the 3rdInternational Lusofonia Wusu Championship 2014 held at Peddem Multipurpose Complex, Goa from 18th to 29th January. She beat her opponent Lei Weng Si of Macau, China in the event of Guanshu by two points for the Gold medal and another three silver medals in Wushu Daoshu, Dulian and Changquan. In the said championship, India won overall team champion in the tournament with 37 Gold, 27 silver and 28 bronze. Ten countries participated in the tournamnent.
Pleased with the achievement of the young girl, a daughter of widow mother, locals of Keirao bitra, Irilbung Machahal, Langdum village felicitated Y Sapana organized by the Nongpok Ningthou Panthoibi Development Committee, Keirao and Keirao Gram Panchayat in collaboration with the local clubs.
Y Sapana Devi from Keirao Awang Leikai could win Gold Medal for Manipur in Wushu Changquan event in the 35 th National Games beating her opponent from Madhya Pradesh by 9.33-8.01 points. In the game, Manipur Wushu players team, who won five Gold Medals, three silver Medals, was instrumental to raise up medals for Manipur by placing the state in seventh position in the Medal Tally. Players of Manipur Wushu – Y Sapana, M Sadananda, S Chaobi, L Sanatombi and Y Sanathoi won Gold Medals for Manipur while H Deban, M Punshiba and O joy won Silver Medals.
Brought up in a poor family background by a widow mother, Sapana lost her father at her tender age of eight. Since childhood, she has a great passion for sports. She started sporting career as Gymnastic player and won many medals in many national championships. However, she left Gymnastics and opted for Wushu at last. Her mother runs a small grocery shop at Irilbung Bazar and maintains the family with seven kids ( six daughters and one son).
Credit of my achievements in sports goes to my mother who always extends her support to me. She use to motivate and encourage me to bring more medals for the state and the country. I could not bring any medal in the recently concluded Asian games, but this defeat doesn’t demoralize me at all. I am preparing to bring Gold Medal in the upcoming Asian games and Olympic, she said.
The girl Wushu player had earlier won many medals in various National and international Championships. She clinched four Gold Medals in the 34th National Games, Jarkhand held in 2011 in Wushu Jianshu, Qianshu, Duilian and Changquan, one Gold Wushu Gunshu and three silver in Daoshu, Duilian and Changquan in the 3rdLusofonia Games, Goa held in 2014. Apart from this, she brought laurel for the country by winning a Bronze medal in Wushu Dulian in the 1st Asian Martial Arts games held in Thailand in 2009 and 3rd world Junior Wushu Championship, 2011 held in Singapore. She also participated 3rd world Junior Wushu Championship, 2009, Singapore, 11 th world Wushu Championship 2011, Turkey, 12 th world Wushu Championship 2013, Malaysia and 8th Asian Wushu Championship, Ho Chi Minh city, Vietnman 2012 and got seventh and eight positions respectively
In the national level, she won two Gold medal in Wushu event in the 8 th Junior national Wushu Championship, Bhopal, 2008, four Gold medals in 9 th Junior national Wushu Championship, Shatisgarh, 2009, two gold, two Silver in 17th senior national Wushu championship, Maharastra 2009, 18th senior national Wushu championship, haridwar, 2010, four Gold in 20th senior national Wushu championship,, Jammu, 2012, four Gold in 1st senior national Wushu federation cup, Haryana, 2012, three Gold in 21st Senior national Wushu championship, Kilkata, 2013.
Apart from this, she brought laurel for the country by winning a Bronze medal in the 1st Asian Martial Arts games held in Thailand in 2009 and 3rd world Junior Wushu Championship, 2011 held in Singapore.
It may be mentioned that Sapana’s name was excluded from the list of selected players of Indian Wushu team for the Encheon Asian Games 2014 at Korea. Sueprised and shocked at this, she complained to the Ministry of Sports, Government of India for reviewing the selection, pointing out that she is an International Wushu player taking part in Indian National Wushu Coaching Camp at SAI Bhopal for the Asian Games and she has earned many laurels at the national and international level competitions medals in Wushu. Finally, she could get justice and was sent to Korea for the Asian Games under intense pressure from the BJP Manipur Pradesh president Th Chaoba who urged the Sports Ministry to review the selection.
Despite Manipur is regarded as sports house of the country and Manipuri players use to bring laurels for the country in many international championships, we often experience discrimination, favoritism and corruption in sports while selecting sports persons for sending to International championships. Such malpractices needs to be checked as it would demoralize the budding players who would bring laurels to the country. How can we bring laurels for the country when malpractices, favoritism and corruption always prevail in sports, she questioned.
With state Government lacking encouragement to the players, many talented players have left the state to find their better ways. Manipur cannot be dominated by any state in the national level games if all the Manipuri players representing other states including services collectively play for the state. I don’t know how long I would continue my career in sports with the support of my poor widow mother. If Government provides me a job, I can afford my family and bring more laurels for the country. I am looking for medals in the upcoming Asian Games and Olympic, Sapana said.