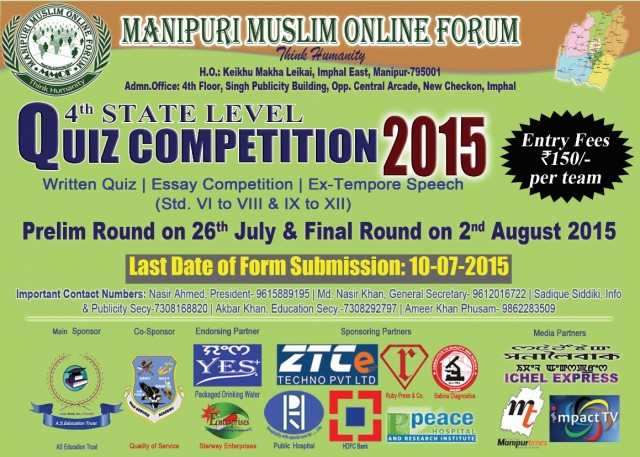 Manipur Muslim Online Forum (MMOF) brings 4th Edition of Quiz Competition after 3 successful competition held in the year 2012, 2013 & 2014. For the convenience of the students, preliminary round centre has been fixed at five locations viz Imphal, Lilong, Mayang Imphal, Kwakta, Yairipok. Besides we will also make centre at such school if the total number of participants from the school is not less than 50 teams.

The Quiz will have two rounds viz 1) Preliminary Round and 2) Oral Round. The Category I (Class VI to VIII) won’t have Oral round but written only.

On the final day, we will have Essay writing competition as well as Extempore Speech. The students selected for Final round will be carried by our Bus from Imphal to Yairipok (both ways).

Syllabus, Prize amount and other details can be seen from the application form which is available at the following places