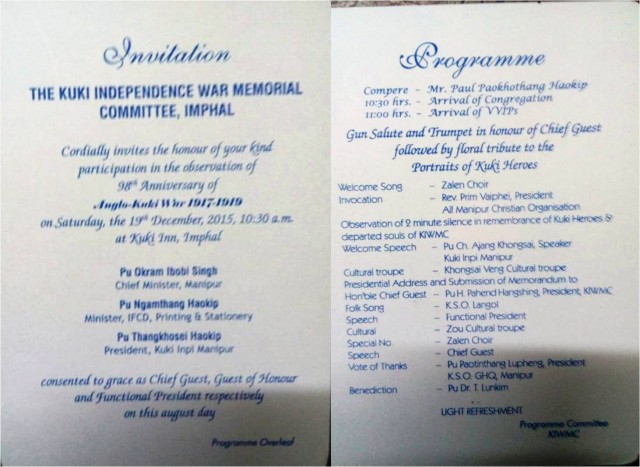 The Kukis, by tradition, tremendously valued chieftainship and held their chiefs in high esteem. The Kuki villages like other tribal villages practice chieftainship form of administration. However, unlike other tribal chieftainship a Kuki chief naturally is a clan head (Mi U-pa) and his chieftainship is hereditary. As such the chief wields enormous power and control over the people. The chief rules with authority with the help of a small group of council which includes semang, pachong, and lhangsam; and commands absolute loyalty from the people.

The Kukis have always cherished their peaceful independent life. In the hill areas of Manipur the lands inhabited by the Kukis were generally fertile, bountiful and abundant with game. The Kukis who were known to be expert bowmen and trappers were skilled hunters. They used to venture into the forests with dao, bow and spear to hunt animals. They cultivated the fertile hill slopes and were self sufficient in all aspects of their simple economy. And so, when faced with any external threat they were always prepared to defend their freedom and independence with fanaticism.

The Kukis have inhabited the hill areas of Manipur since time immemorial and enjoyed unrestricted freedom in their lands. No one has given them any trouble. They settled peacefully and administered themselves independently of the Maharaja of Manipur. The Maharaja never considered the Kuki chiefs as his vassals but regarded them as his allies. The Kuki chiefs ruled their lands in the hills whereas the Maharaja ruled in the Manipur valley. And as allies, the Kuki chiefs were always ready to render their help to the Maharaja when the need arises.

Cause of the war

The World War I broke out in 1914 and towards the end of the war the British imperial government directed the Maharaja of Manipur to raise 2000 labourers for the labour corps in France. When the Maharaja began to raise labour corps from the hill tribes, some of the Kuki chiefs opposed. In spite of the British government repeated orders for conscription of Kuki villagers into the labour corps the Kuki chiefs stood their ground in defiance. So in October 17, 1917 the then political agent marched with an escort to the village of Lonpi intending to arrest Chief Ngulkhup who had disobeyed a summon to come in and discuss the matter. Sensing trouble, the chief and all his men escaped into jungle.  The British, as a result, set fire to the village and burnt it down.

The attitude of the Kuki chiefs in the western hills, the south-western hills and eastern hills was equally defiant. They were steadfastly opposed to the idea of working abroad as labourers, away from the comforts of their homes. They had made up their minds that if they had to die then they would die in their own country (Manipur) rather than die in a foreign country. So they prepared to meet force with force. It was made known to the Political Agent that 22 Kuki chiefs were determined to resist the British with force.

Attempt to appease the Kuki Chiefs

The British government had made several attempts to appease the Kuki chiefs to get them obey the orders.  The political agent Col. W.H.G Cole had gone to France leaving his wife Mrs. Cole at Imphal. During his absence Mrs. Cole went to meet Ngulkhup, Chief of Lonpi and Ngulbul, Chief of Longja for reconciliation with offers but her effort went in vain. Chief Ngulkhup calmly turned down the offers of Mrs. Cole.

In another attempt to appease the Kuki chiefs to get them obey the orders; on 9 October 1917 the political agent Higgins met the leading Kuki chiefs at Oktan, about 20 miles west of Imphal. But the Kuki chiefs were unfazed by the British attempt and were resolute in their decision not to join the labour corps. The meeting turned out to be a failure. The Kuki chiefs offered some amount of money and home brew liquor to the British and asked them to exempt the Kuki people from conscription to France as labour corps. But their request was rejected.

Commencement of the war

The Kuki chiefs, as a way of their custom and tradition, partake in the killing and sacrifice of a mithun to perform war rites and rituals. They took a pledge by feasting together and distributed a piece of meat to each of Kuki village chiefs through a messenger. They also bind together charred firewood with dry chilly and dispatched it as a symbol of preparation for war to all their fellow chiefs of Manipur, Lushai Hills, Naga Hills and Chin hills.

Before the war was declared, Capt. Halliday along with 80 Assam Rifles sepoys were ambushed in the month of September 1917 at Chakpi River by the Kuki sepoys under the leadership of Ngulkhup, Chief of Lonpi and Ngulbul, Chief of Longja. After a pitched battle the British forces retreated, leaving 3 dead soldiers behind and several sepoys wounded who were brought to Imphal.

Theatres of the war

The Eastern Sector: It comprised the Chahsat areas. Lhukhomang, Chief of Chassad; Paukholep, Chief of Bongbal Kholen and Paboi, Chief of Sita led the Kuki forces. Capt. Parry and Block who commanded the British forces attacked Lhukhomang (Pache) Chief of Chahsat and suffered casualties in which Lt. Molesworth of Burma Military Police was killed in action.

South Eastern Sector: This sector covered the Mombi (Lonpi) area bordering the Chin Hills. This sector was under the Command of Capt. Coote and Lt. Halliday, on the British side. The two chiefs, Ngulkhup Chief of the Mombi and Ngulbul, Chief of Longya who led the Kuki forces proved a force to reckon with till the end of the war.

Southern Sector: This sector covered Henglep areas under the Command of Capt. Goodal Fox, Lt. Carter and Hooper on the British side. The chiefs of the Ukha and Henglep and the adjoining village chiefs resisted befittingly for 12 hours against the attack by seven British officers and 200 sepoys. Pakang, Chief of Henglep; Semchung, Chief of Ukha; Haoneo, Chief of Nabil; Paosun, Chief of Songphu, Goulun, Chief of Hengtam; Langzachin, Chief of Beheng and Lunzamang Manlun, Chief of Tonjang faced the war the in this sector.

Western Sector: This sector covered Jampi area which was under the Command of Maj. Marshal, Lt. Walker, Capt. Montifiers and Needham on British side. Khotinthang @ Kilkhong Chief of Jampi; Tintong, Chief of Laijang, C-in-C of Kuki forces; Lhunkholal, Chief of Khongjang; Heljason, Chief of Loibol; Khupkho, Chief of Langkhong and Chief Enjakhup led the war on Kuki side. In this sector Enjakhup and Tintong Chief of Laijang C-in-C of the Kuki forces successfully withstood the advanced of the British army. Lengsat, one of the Kuki sepoys killed 3 white men in the encounters. He was finally shot at the leg and overpowered; and his head was chopped off by the British.

North Cachar Hills: Serious encounters took place near Haflong and other Kuki villages. The British forces were under the command of Capt. Copeland.

Burma Sector: This sector covered the Chin Hills. The British forces from Indian side were under the Command of Capt. Falkland and Capt. Montifiers of 1st and 3rd Assam rifles with military strength of 150 each, whereas in Burma side the British army was led by Col. Abbay, Maj. Barne and Mr. Wrights, Superintendent of Chin Hills. In the encounter with the Kuki warriors at Kapi, Aiton, Shurkwa, Naring, Sakte the British army sustained many casualties, wherein Mr. Wright and Mr. Alexander were badly wounded. The Kuki warriors who had reached Lushai Hills were driven back from Vanlaiphai upto Chin Hills by Mr. Bartley officer in-charge of Lunglei Civil Police. Mr. J. C. Higgins the Political Agent and the DIG faced a series of ambushes on their way to Khongjol where Higgins himself sustained bullet injuries.

The Anglo-Kuki War was brought to a close by the proclamation of general amnesty by the British imperial government under the following terms and conditions:

Result of the war

As a result of the Anglo-Kuki War, the Hill areas of Manipur was brought under one administration and divided into 3 sub-divisions viz. Tamenglong, Churachandpur and Ukhrul. Before the war the Hill areas of Manipur were under independent tribal chiefs. The tribal chiefs were not under the suzerainty of the Maharaja or the British but after the war the hill areas were directly brought under their administration. The long period freedom enjoyed by areas under the Kuki chiefs came to an end as a result of the war.

After fighting for almost two years between 1917 and 1919, most of the Kuki villages had been burnt and ravaged. Famine and starvation set in, bringing untold misery to the people. To avail the offer of political amnesty some of the Kuki Chiefs in good faith agreed to lay down their arms and stop the fighting. Pu Chengjapao, Chief of Aisan along with 48 of his people, firearms, and with Rs. 300  as fine was the first to court arrest before Col. J.C. Higgins, the then Political Agent on 1st November, 1919. He sought general pardon on behalf of the Kuki people. The other chiefs followed suit and were sent to jail.

Both the warring groups suffered heavy casualties on each side. The British Army lost 3 officers, and 80 regular sepoys killed in action, 151 were wounded in action and 478 succumbed injuries and diseases. The losses suffered by the Kukis were:

The following rewards were obtained by the British army officers for their exploits in the war:

A War Tribunal was set up with officers who have fought in the war as its members, in blatant violation of the norms of jurisprudence. They were-

The punishments meted out to the Kuki Chiefs by the war tribunal were unjustly harsh as the political amnesty promised earlier was never granted to the chiefs. The Tribunal put the Kuki chiefs on mock-trial without any defense counsel. The Kuki chiefs were not treated as P.O.Ws but were treated like common criminals. The British government confiscated the properties and possessions of the chiefs and forced the Kuki villagers to construct 270 miles of bridle paths. The injustice and vindictive action of the British imperial government caused hurt and discontentment to the Kuki people.

Punitive Action against the Kuki Chiefs of Chin Hills, Somra tracts (in Burma), Assam and Manipur (in India)

In accordance with Mr. Streets’s recommendation, punishment was imposed on 10 Kuki Chiefs in Burma as below:

The following were sent to TAUNGYL Jail in Burma

The Kuki Chiefs of Manipur sent to confinement at Sodiya Assam are given below: