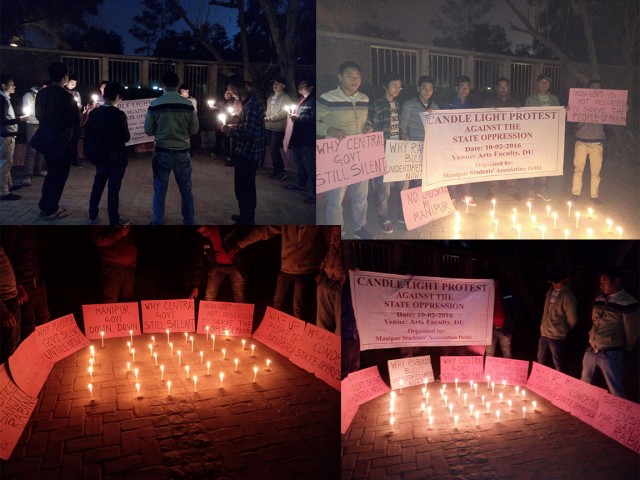 Manipur Students’ Association Delhi had organised a candle light protest at Faculty of Arts, Delhi University today condemning the Manipur Government for not taking up any appropriate action to serve justice for 2009 fake encounter case of Chungkham Sanjit and Thokchom Rabina and other extra judicial killing. MSAD would like to know if there are any hidden agendas to why the Government of Manipur is still silent even when the culprit have confessed himself and revealed the responsible officers in that fake encounter.

It is a well-known fact that the security forces in Manipur (both state and central) are exercising extra judicial power to the people creating a fear psychosis to public for quite a long time. Most of their claim of encounter turns out to be extra judicial in nature. This can be vividly seen in the report of Santosh Hegde Commission submitted to the Supreme Court of India.

In this hour, MASAD would to appeal the people of Manipur to rise and uphold democratic rights. MSAD is preparing for further protest with other concern organisations and students in Delhi.