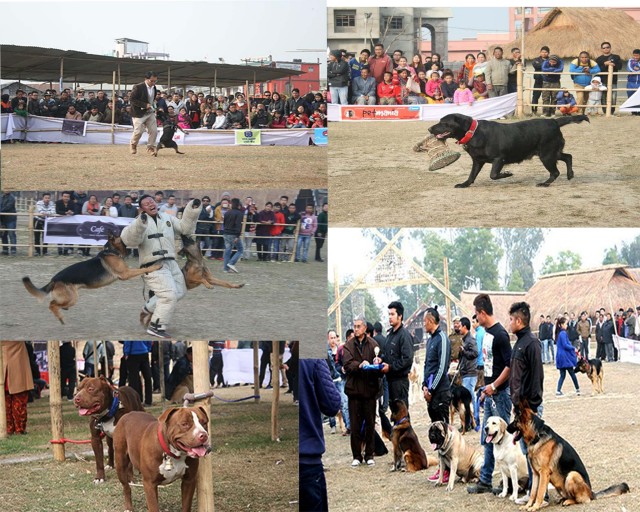 IMPHAL, Dec 26: The Canine carnival 2015 at Imphal Hapta Kangjeibung evoked an overwhelming response on Friday with more than 100 dogs turning up for the competitions.
Organised by Manipur Dog Lovers Club (MDLC) under the theme ‘Stop Dog Meat’ and ‘Health First’, the event is focused on various breeds of dogs raised in the State.
B. Badrinarayan Sharma, Commissioner (GAD &AE) and Dr. R.K Nimai inaugurated the dog show as Chief Guest and President respectively.
The exhibition turned out to be a dog lovers’ delight with different breeds, including the indigenous varieties, adorning the show. Different Dog varieties like Labrador retriever, German Shepherd, Siberian Husky, English Mastiff, Rottweiler, St. Bernard, Bull Mastiff turned up to participate and showcase their talents in the show. Local breeds of Awang Huijao (Tangkhul hui) and Meitei Hui also participated in the show.
Breed show, Talent show, free veterinary camp, talks by animal experts, photo exhibition, felicitation of the Samaritans and book release were also a part of the programme.
“Pet dogs are considered as men’s best friends. If they are properly trained, they can effectively guard our house and protect our property. Many dog lovers in the state are investing thousands of Rupees in keeping canines of foreign breed like German Shepherd, Rottweiler, Spaniels, Doberman, Great Danes, Dalmatians, Pugs, and Boxers etc. as pets, which are considered as intelligent breeds. People think that indigenous breeds take much time in training and they cannot be trained as that of foreign breeds. It is a wrong notion, Dog trainer Nongmeikapam Jotin said.
” Meitei Hui and Tangkhul Hui are more intelligent and have stronger will power than foreign breeds”, Jotin, who is a well expert in dog training and great exponent of local dog breeds said.
Jotin is the instructor of Jone Dog Care Centre which was initiated in 1999 at Thongju Part-II has so far trained more than 100 local dogs.
He and his pet dog “Leika”, a tangkhul mixed breed showed their talents mesmerizing the viewers in the show.
Sharing his professional experience, Jotin said, “Although an animal, a dog can read the emotion of his master through his eyes, facial expression or gesture. An emotional understanding or relationship needs to be built up first between a dog and man while training them to follow various commands. Training them with physical punishment using a stick creates a mental tension and betrayal in their mindset. I always train dogs with making them emotionally happy and free from any tension under the maxim – Lack of reward is my punishment. Instead of beating, I punish the dogs making myself unfriendly to and aloof from him. Physical exercise to keep the dogs mentally fit is also an important part of dog training”.
According to him, he did not learn the skill of dog training from any formal training institutes. It is self learning. He has produced a documentary film based on dog training entitled ‘Dog: man’s best friend ‘TOMTHIN’-I which is being telecast on Impact TV. Second production of the same documentary is on the pipeline. Apart from this, he plans to hold a massive poster campaign under the theme, “Save Indigenous Dogs” with a view to impart awareness to the people about indigenous dogs, which are currently on the verge of extinction.
His indigenous dog ‘Jone’ could grab the opportunity to prove that the talent in the indigenous dogs is no less than that of the other foreign breeds for the first time during the Dog Show organized by Kennel Club of Manipur in 2004 at Pologround. In the show, his dog could bag twin awards “Best Companion” and “Best of the Breed”. The then Governor of Manipur, Arvind Dave appreciated his dog for his unique talent and skill. The same awards could be achieved by his dog in the second dog show too. Jone who could bring laurels for his master during his young and energetic days is now 15 years old and weak. He is still alive. What indigenous dogs make the difference is that the life span of foreign breeds is 7 to 8 years while indigenous dogs can live up to 15 years because local dogs adapt better to the local climatic and environmental conditions.
The chilly evening ended with several talent shows which were brought in by the trained dogs. They won our hearts and also made us all feel that they are meant to be our “companion” and “not for our consumption”.