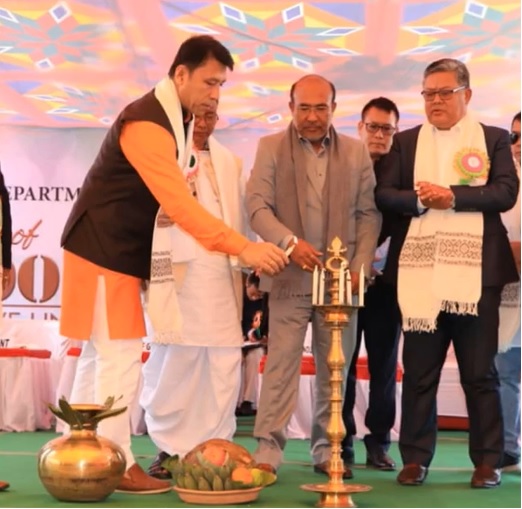 Imphal, January 18, 2019 (DIPR): Chief Minister Shri N. Biren Singh launched ‘School FagatHansi’ mission, an initiative under the Government’s popular ‘Go to Village’ mission, at a function held at Yumnam Huidrom Government High School, Wangoi in Imphal West District today.
The mission has been introduced with an ambitious objective to give renewed thrust towards improvement of Government schools both in terms of physical and manpower infrastructure. One Government school each in all the 60 Assembly Constituencies of the State will be developed as model schools in the first phase under the mission. All these schools would be run and developed in a uniform pattern.
Speaking at the occasion as the chief guest, Shri N. Biren Singh said that the ‘Go to Hill’ and the ‘Go to Village’ missions have been successful in connecting people with the Government. Now, the Government intends to put special focus on improvement of Government schools because economic condition of the common people is not improving despite Government’s efforts as they generally spend huge amount of money in children’s education, he said.
As such, after a thorough discussion, the Government decided to enhance the condition of Government schools by way of initiating ‘School Fagathansi’ mission for an overall long term and sustained development of the State, he added. The Chief Minister expressed hope that the new mission would garner trust of the people towards Government schools. Stating that all the model schools would have classes from pre-nursery to Class-X, the Chief Minister informed that no teacher would be transferred from these model schools for at least three years in order to maintain stability in the number of teaching manpower.
Observing that involvement of local people, educationists, local club members and Meira Paibee leaders in the scheme is of immense necessity, the Chief Minister urged all concerned to extend cooperation in making the mission a success. In addition to the existing School Management Committees, selected schools under the mission would be managed by re-defined Management Committees headed by circle MLAs concerned, Shri N. Biren said.
On the other hand, the Chief Minister said that Rs. 50 lakhs had been sanctioned by the State Planning Department for awarding cash prizes to meritorious students. It may be mentioned that in a Well Wishing ceremony held at Hapta Kangjeibung on January 28, 2018, the State Government announced to give incentive awards to meritorious students of Government schools, who secure positions in Class X and XII examinations conducted by BOSEM and COHSEM.
The Chief Minister said that in addition to providing free education under Right to Education (RTE), the State Government has recently launched a scheme known as ‘Lairik Tamhansi – No Child Left Behind’ in which school dropouts are readmitted in Government schools.
He expressed happiness that Directorate of Minorities Director Shri Ng. Uttam had sought permission from the State Government to adopt Tampha Junior High School. The Chief Minister also urged the willing people to come forward and adopt Government schools like Uttam.
Regarding insecurity felt by the common people in the aftermath of passing Citizens Amendment Bill by Lok Sabha, the Chief Minister observed that protection of indigenous people can be started at individual level by not selling lands to outsiders. One should never sell precious ancestral lands to get a simple Government job or own a car, he said. Informing that CCTV footages of Physical Efficiency Test (PET) of the ongoing IRB recruitment are recorded live, the Chief Minister warned that anybody found involved in any sort of corruption in the test would not be spared.
Education Minister Th. Radheshyam, who graced the function as the president, said that the State has witnessed a lot of positive changes and development in the State after the coming of the new Government. He said that there has been remarkable rise in the number of students in Government schools in the past couple of years. The Minister said that the new mission has been conceptualised and launched under the supervision of the Chief Minister as it is the responsibility of the Government to provide good schools having adequate modern up-to-date infrastructure and good teachers to students.
Health Minister Shri L. Jayantakumar, CAF & PD Minister Shri Karam Shyam, Water Resources Minister Shri Letpao Haokip, Manipur Infrastructure Development Agency (MIDA) Vice Chairman Shri O. Lukhoi also spoke at the function as guests of honour.
Deputy Speaker Shri K. Robindro, State Planning Board Deputy Chairman Shri S. Rajen, Planning and Development Authority Chairman Shri T. Robindro, MANIDCO Chairman Shri Radheshyam Yumnam, Manipur Building and Other Construction Workers’ Welfare Board Chairman Shri H. Dingo, Kakching AC MLA Shri Y. Surchandra, Chingai AC MLA Shri Khashim Vashum, Yaiskul AC MLA Shri Th. Satyabrata and Khurai AC MLA Shri L Susindro were also present at the occasion as guests of honour.
Commissioner (Education) Shri H. Deleep, Imphal West DC Shri N. Praveen and Education-S Director Shri Th. Kirankumar were also present at the function.