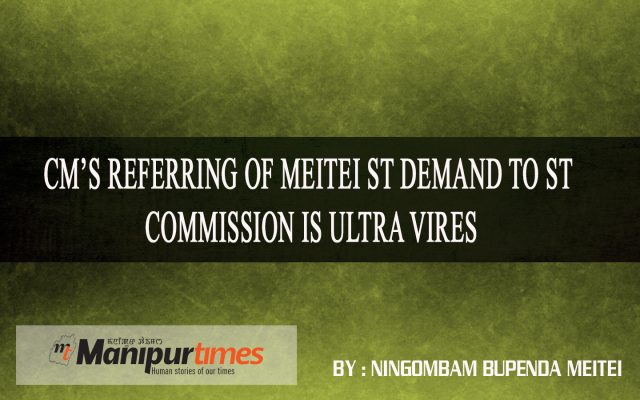 This writing of mine, which could also be perceived as a personal opinion, is indeed a matter of public importance. It is to present a constitutional argument on the basis of the statement made by the incumbent Chief Minister of Manipur in the ongoing Manipur Legislative Assembly’s session. The statement of the Chief Minister is reported in The Sangai Express (English Edition), dated the 3rd of August, 2017 (https://www.thesangaiexpress.com/st-status-meiteis-can-recommended-report-msc-st-biren-respect-elected-members-cm-bureaucrats/ ). The argument is: the Chief Minister’s referring of Meitei/Meetei ST demand to Manipur State Commission for ST is ultra vires. Therefore, the withdrawal of the statement, stated by the Chief Minister of Manipur in the State Legislative Assembly with regard to referring the matter of Meitei/Meetei for ST demand to Manipur State Commission for ST, has to take place before this session of the House ends.

It is in this regard, that the Chief Minister’s statement, on the floor of the House in the Legislative Assembly, on referring the issue to the Manipur State ST Commission, is constitutionally not viable. Therefore, to honour the House, the Chief Minister shall withdraw the statement from the House while the House is in session; otherwise, the statement, which cannot be prevailed upon by any executive order taken outside the House, has to go through for the next winter session, in December, to be looked into whether the statement ought or ought not to be there in view of the jurisdiction and powers of the said Commission, enshrined under the Manipur State ST Commission Act 2014, with regard to making any report on a community which is not yet enlisted in the ST (Scheduled Tribe) List of India. Therefore, in preserving the spirit of the Constitution of India, there needs to be a review or a discussion on the said statement tabled by the Chief Minister in the House with regard to the demand of Meitei/Meetei for ST.

By referring the matter to the said State Commission for ST, Manipur Chief Minister, on the floor of the House, has dishonoured the Constitution of India – which empowers the Act on only ST’s safeguards – and therefore, knowingly (if so, then it leads to misleading the House) or unknowingly (if so, then officials reporting to the Chief Minister need to be corrected) has also misled the House. It is at this point, there arises a need to withdraw the statement stated in the House to preserve and protect the ethos and sanctity of the Constitution of India. And, the withdrawal of the statement has to take place before this session of the House ends, otherwise either the whole state has to wait for a Special session or the next session in the winter to discuss/ debate on or withdraw the statement.

If Ravi fails to address the core issue and tries to resolve the Naga issue, it will be another “16-Point Agreement”