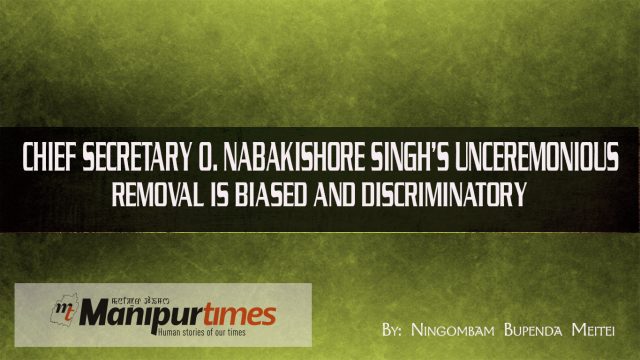 I wish that this piece of my writing, wherein the views – which are going to be expressed, hereafter – are all personal, shall not be perceived as a point to either support the former Chief Secretary of Manipur Oinam Nabakishore Singh or criticise the incumbent Chief Minister of Manipur Nongthombam Biren Singh because both know me in person and so do I honourably interact with the two. Both, to my understanding, are honourable gentlemen.

My writing is also not to project any sort of opposition to any civil servant, who intends or desires to be the Chief Secretary of the state in a near future, because some of the senior civil servants – besides being known to me in person – were my maternal uncle’s juniors. My uncle, who was in Indian Administrative Service, retired as Commissioner to the Government of Manipur in 1990s.

My arguments, here, will be to argue that the unceremonious removal of O. N. Singh (Oinam Nabakishore Singh) from the post of the Chief Secretary of Manipur still stands biased as an act of deliberate, discriminatory and unprecedented example in the history of Manipur’s Civil Secretariat. The action might sound politically empowering in a democratic establishment, but it also has sent a message of unnecessary fear of de-motivating environment in the work culture for the young inspired civil servants of the state of Manipur. It is, indeed, a prerogative of the Chief Minister to have his or her own Chief Secretary and Director General of Police; but the removal of O. N. Singh from the said post by the incumbent Chief Minister who, alongside with O. N. Singh as the Chief Secretary, also has celebrated a successful 100 days of his new government – is a question which can’t be swept under the carpet.

The former Chief Secretary’s tenure was not even for 2 years, while the present Chief Secretary’s tenure can’t even – if not extended – be for four months. On the directive of the Hon’ble Supreme Court of India, as well as recommended by the Second Administrative Reforms Commission, DoPT (Department of Personnel & Training), GoI – with the notification under the then UPA government – ordered for at least two years of fixed posting of all India services (IAS, IPS and IFS) officers. In a case of O. Nabakishore Singh, IAS, whose appointment as the Chief Secretary came into effect from the 1st of October, 2015, he was removed from the post of Chief Secretary even before completing 2 years of tenure in the post of Chief Secretary.

When the entire Manipur Valley is inundated, almost submerged under water, due to unprecedented floods, caused both by man-made and natural calamities, at present, the sudden change of the state’s Chief Secretary is not a matured and wise decision of the incumbent Chief Minister of Manipur. Any IAS officer, who is at the rank of at least Additional Chief Secretary, irrespective of their seniority, as I have been informed, is eligible to be Chief Secretary. Though, the Chief Minister can have his or her choice to be the Chief Secretary, but the sudden removal of the first Meitei IAS officer from the post of Chief Secretary is also a clear sign of a planned dishonour to the entire indigenous people, in particular, and the entire people, as a whole, of the state of Manipur. Besides dishonouring O. N. Singh, a non-controversial and upright officer of gentleman’s qualities and characters, the unceremonious removal of him from the post of the Chief Secretary is undoubtedly biased, discriminatory and unprecedented in the history of modern Manipur’s civil administration in an independent modern India.

If Ravi fails to address the core issue and tries to resolve the Naga issue, it will be another “16-Point Agreement”