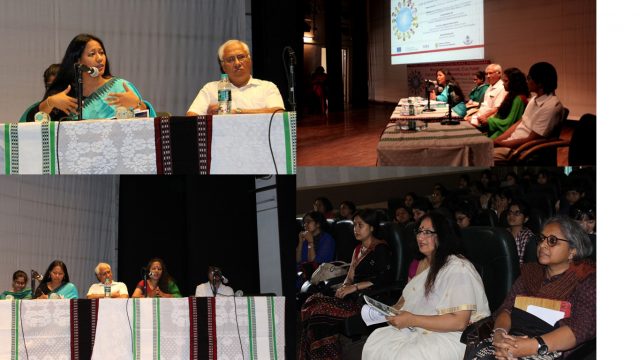 30 March 2017, New Delhi– 21st March is observed globally as International Day to End Racial Discrimination. To commemorate the occasion Control Arms Foundation of India in collaboration with Indraprastha College for Women of University of Delhi and Manipur Women Gun Survivors Network organised a panel discussion on 30 March 2017 at Auditorium, Indraprastha College, University of Delhi Delhi. The purpose of this panel discussion was to understand Race, Language and Culture: Locating the Northeast in India. Aim of the conference is to locate the diversity of Northeast India in terms of its Race, Language and Culture and to create a dialogue to address the lacunae and look at ways forward for celebrating the diversity of this region in India and ending all forms of discrimination.

Speaking at the inaugural session Ms Binalakshmi Nepram suggested that India is a land of great diversity, we are a country that believes in the saying “guest is god”, hence such attacks on African nationals in New Delhi is deeply saddening. She also highlighted that there are approximately 50,000 African countries nationals in the country and around 2,500 of them live in New Delhi. These attacks are only a small part of the entire country, yet it makes us realize that we are in fact marred by racism. Elaborating on the topic of panel discussion “Race, language, culture: Locating Northeast in India” on the occasion of commemorating international day of elimination of all forms of racial discrimination she added that the session would revolve around three topics; first, racism, second mechanisms to address it and third, to move away from the realm of bookish knowledge testimony of survivors who have lived these attacks.

Elaborating further she said that the Northeast of India is a land of 272 beautiful ethnic communities. These people leave their homeland in the pursuit of better education and job opportunities 86 per cent of them have claimed to face racial discrimination in New Delhi. Hence, it’s time for constructive mitigation. She suggested that it is time India adopts an Anti- Racial Law to end racial discrimination.

Mr Ravinder Pal Singh, Defense Analyst, elaborated on the possible redress mechanisms that could be adopted. He argued that we must value liberal democracy. We got independence 70 years ago, although there is a long fight ahead to achieve social freedoms. India is still marred with racism, casteism, communalism and gender based violence.  He also suggested that one must make adequate use of parliamentary oversight to make our elected representatives accountable. The government advice on policing has been a great achievement although 7 lacks women short in our police force, further he said.  He also urged that steps can be taken by colleges to advance social freedoms.

Dr. Babli Moitra Saraf, Principal IP college, suggested that need of the hour is to accept diversity in the country. Giving the instance of her college she suggested that the Northeast Society has been an active part of the college. They have incorporated several dialects of the region in publication of their college magazine. Dr. Nito Das, Professor, IP College, spoke about locating Northeast in the country, gender identity in armed conflict and language of Northeast from a literary perspective. Expressing her views on the Assam agitation she suggested that it cut across caste and class. At the same time the violence in itself was militant in nature.  Work of women militants was seen as inferior than that of the male militancy. Many of them had been thrown out of their home for being sexually promiscuous.

Mr Romen Arambam, a victim of racial attack, gave the testimony of racial attack meted out on him by his employer. He expressed that he was brutally beaten up on false accusation. He is a simple hardworking citizen from a small village in the Northeast. He suggested that he has approached the Ministry of Home Affairs and appealed to the highest level police personal without any respite. Yet, he has not lost faith in the Indian judicial system and was hopeful that justice will prevail someday.

Racial discrimination cases occur on daily basis in India. Of the various incidents, the violence against Northeast people in the city, as per data provided by Union Home Ministry, has risen around 270 percent in the last three years. As per the Bezbaruah Committee Report submitted in 2014, 86 percent of migrated Northeasters have faced discrimination or harassment with immense psychological and physical impact. This and other forms of racial discrimination that exists in country must be addressed.

The event was attended by academicians, students, researchers and civil society representatives.