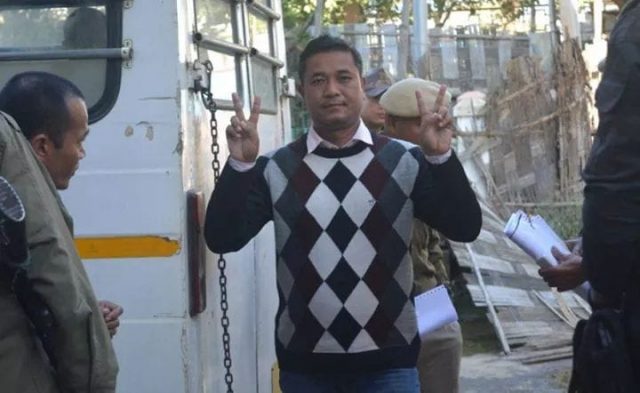 The Annual General Body Meeting 2018(AGM 2018) of Human Rights Law Network (HRLN) was held at Rajasthan from 19th December to 23rd December 2018. It was attended by many lawyers and activists associated with HRLN from nearly 25 states of all over India and many social organizations of Rajasthan. The AGM 20018 discussed various issues of human rights violations in many parts of India. In one session, the arrest of a journalist in Manipur, Mr. Kishorchandra Wangkhemcha for using “F” word under NSA by the present government of Manipur was also discussed.

Mr. Kishorchandra was arrested for his Facebook post criticizing the government of Manipur for organizing the birth anniversary of Rani Jhansi in Manipur.

On the arrest of the journalist Mr. Kishorchandra, the founder of the HRLN and senior advocate, Dr. Colin Gonsalves said, “Regarding the arrest of Kishorchandra, there has never been a case like this one before. To use the “F” word, for the use of swear words is part of the freedom of speech and expression. It is lawfully used. It is justifiably used. And for the state to try to arrest such a person is totally wrong. And I do hope that he moves to the High Court immediately and gets bail. And this matter, not only should he get bail but prosecution should be quashed. The use of swear words is totally permissible under the constitution of India. It is a part of the freedom of speech and expression. Every journalist and every human rights activist to stand up and support Kishorchandra against the tyrannical used of law against him.”

He further said “Further to say that Rani Jhansi has nothing to do with Manipur whether right or wrong is absolutely protected by the freedom of speech and expression. He may be right or he may be wrong, but there is nobody in this country, who can prosecute a journalist or anybody for that matter on the basis of the statement; which seems as an offence for a very conservative and right wing section of the society. It is protected by the freedom of speech and expression.”

He added “If there is anything the HRLN can do to help to support legally or otherwise, HRLN stands fully with him and we are sure of victory because what is done is totally unconstitutional.”

On this case of Kishorchandra, Mr Shreeji Vhavsar, senior advocate of  the Supreme Court, associated with HRLN had gone to Imphal to meet Mrs. Ranjita Wankhemcha, the wife of Mr. Kishorchandra and went to Manipur Central Jail, Sajiwa to meet him on 20th December 2018. Even after 3 hours of waiting, the jail officials didn’t allow the advocate to meet his client.