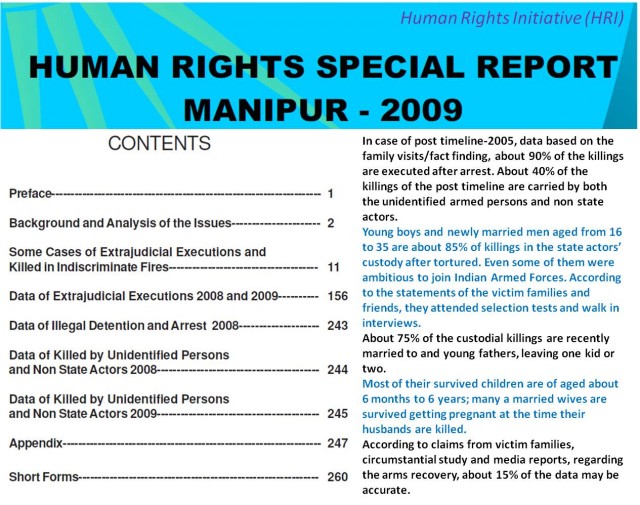 One can download Human Rights Special Report, Manipur – 2009  at http://goo.gl/j9odoq

The Human Rights Special Report, Manipur – 2009 is of case accounts and data especially about the extrajudicial executions in Manipur over the last few years. The larger data given in the table format focus on the incidents occurred during the period 2008 and 2009. Some of the data of rights violations started in the early period of 1970s. An analytical write up is also included covering most of the contents in this report. It is towards making use of fact finding, family visit and documentation for enabling to bring justice for those who are undergoing pain and suffering due to the gross human rights violations especially those who have lost their husbands, sons, fathers, brothers, daughters, sisters and mothers in the so called encounters and other incidents of rights violations.

The purpose of this report is to extend an endeavor to draw the attention of authorities and stake holders concerned by alerting with the contents of this report. It intends to make a juxtapose using the indicators that how far the issues of extrajudicial executions veer away right to life of peoples of Manipur from the universal standard namely Article 3 of the Universal Declaration of Human Rights, and at what extent the incidents of so called encounter deaths contradict the Article 21 of the constitution of India.