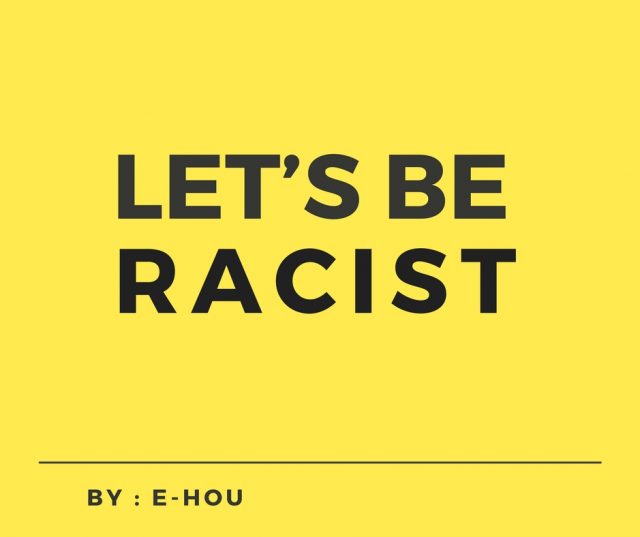 Revisiting the questions of race has always been the constant seek of the identity drama we are embroiled in, for the people from “North East”. This psychological hunger of wanting to identify ourselves with belongingness, an identity, has stripped us of all dignity. Whether one is a “Meitei” or ”Meetei” or any “tei” is an aversion to the serious questions of/on race we need to ask ourselves. It does not matter, we are “muslim” “pangal” or “metei pangal” or any “gal”. It does not matter we are “kuki” or “zomi” or “paite” or “kabui” or “tangkhul”, well literally not now at least before we have some answer to the questions of race.

While we live comfortably in our satisfied world of ruptured reality, we are never looking into our reality as ruptured, something torn asunder everyday every tick of the second. Why do I say ruptured reality? Because in war,reality is ruptured, every single moment. We see in fairly good war movies,one moment a character is talking to someone, the next moment something explodes somewhere and everyone is running around haywire,people blown up to pieces, guns everywhere, rapes and looting, frisking and firing, espionage and assassinations. What a suspense! Let’s do a reality check, and we find this ruptures in frames like in the war movies, is in our own lives, in our reality. Our reality is not a sweet melodrama romance movie like titanic where the shrinking of the ship is the final tragedy; we are not dancing off our lives with Kate Winslet. We are living in a reality with more suspense than the Hollywood war movies, the ruptures are real. You never know when a bomb might explode anywhere, or be dragged out from your house for ID checks. The Supreme Court cases on fake encounters are enough testaments to give a sense of that ruptured reality. Well let’s get on to more ruptures and our satisfaction in believing that there is nothing out of norms going on.

“Chingkies” as we are rightfully identified as, when we travel to the Indian cities like Delhi or Bangalore, is the real medicine for this hedonism of satisfaction we have of closing our eyes to the ruptures. Like the word “slut” denotes a certain characteristics of description with power to exorcise and ostracize a woman’s sexuality, the word “Chingky” is used to ostracize and exorcise the non Indianality( don’t look into Google or dictionary there are no such words but a colloquial term I just invented now for understanding being of Indian). So let’s ask, what is a slut? A slut is in my understanding (that was forced upon me by the culture of my upbringing in the culture) a woman with sexual appetite more than the norms prescribed by the culture. Well! The pitiful argument that stands on this ground for enforcing these cultural moral norms is that women are the couriers of cultures like Bluedart or Speed Post, they deliver culture because after all they are baby bearing machines and they must deliver the cultural moral ethical norms. Rather a postman’s job for women!

Well calling someone “Chingky” is also a slut shaming practice. It is the slut shaming of people using the diameter of eyes taking the ethical moral Indian standards of eye diameters which we are not clear with; and of course the length of the nose is also a determinant factor is the ethical moral standards of looks. Unfortunately , “Chingky” discourses come with a priori judgments, i.e. all “Chingky” women are slutty if not sluts ( a skirt above the ankle is slut shamed in Delhi if worn by a “Chingky” and a half naked blouse by a “non-Chinky Indian” is culture). So unfortunately, when branded as “Chingky”, “Chingky” women are even denied of the courier service of culture because only “non-Chinky Indians” can do that. But wait!Then “Chingky” doesn’t really only mean a snub nose with smaller diameter of eyes to the Indian standards. It also means “Chingky” women lack sexuality to bear cultured child, so in a way all children born to them are bastards, meaning we are all bastards to the ethical moral standards of the Indian culture, so their sexuality is only for pleasure (excuse me rehtoric feminists! I know you guys will say “Chingky”women are truly liberated then,but there is an angle of ownership entailed here, the argument is what does not belong to anyone is mine to take. Therefore the bastardised “chingky” women are lacking ownership to the one who looks at her in the “chingky” frame). It means, we “Chingkies” lack the prescribed ethical moral standards of Indianality( lets avoid “indianess” because it assumes a continuum and places one at point where the tribal is one end the continuum and it culminates into the other end, the Brahmins, the highest form of civilization in India).

So, then the question is now are we ashamed to be “Chingkies”? Well yes,but only if you look it from the civilizational cultural moral ethical angle of the “Indianality”, because then we constantly seek then to be recognized,like a bastard constantly seeking his father and trying to prove his lineage.All because we are ashamed, so we feel we must say we are from an identity with belongingness, that we are not bastards, that we must prove that we have an identity! But should we really be looking at our lives only from the civilizational cultural moral ethical looks of the “Indianality”? or should we look at ourselves with dignity for what we are! We are“chingkies”, we have all the physical structures to be called so. Let it be that we are also be bastardised, but are we really that? Just because we are not in the civilizational cultural moral ethical continumm of the “Indianality”!Let’s be “meiteis” and “pangals” and “kabuis” but every time we assert that, let’s ask ourselves is it because I am ashamed that I am being bastardised by the cultural ethical moral norms of Indianality. And this bastardisation is directly proportional to the colonial psyche created by the acceptance of daily ruptures while at war zones called home; the hammering of the psyche everyday from birth until we look into seeking self contemplation for our inability to do anything about the ruptures. If we go to the Western countries and call a woman there a “slut” because she is open about sexual relationships with her boyfriend, it shows our inability to grow out of our worldview and accept that other ethical moral cultural norms exist. The power of exorcism of the word turns back and bites on those who use it on her, she can either raise a fuss against the shaming or simply consider us, a third world inhabitants incomprehensible of other things but our worldview. Whereas on calling the woman there a slut, she has the ability to fight back or choose to not give a fuss because she is not subscribed to the ethical standards of the other culture that is shaming her(namely the cultural ethics of the person doing the shaming), we are not enjoying the luxury of non –subscription because we constantly seek recognition withplaycards like “We are Indians, not Chingkies” .

While “Chingky” shaming is also institutionally enforced by the inactiveness of the authority to do anything, for us to fight back we need to stop subscribing to the ethical moral norms of “Indianality” and stop accepting ourselves as bastards. So, let’s invert “Chingky” shaming and say yes we are “Chingkies”, just not what it was meant by it because we don’t subscribe to the ethical moral cultural standards of Indianality where the continuum starts with us and ends with Brahmins. Banning the word does not do much justice, like the Canadian Indian standup comedian Rusell Peters says in his jokes on racism that word “Negro” has now been replaced by the whites as “Monday”, why? Because nobody likes Mondays!Then, in the end let’s raise a question against the softhearted word called “North-East”; is it synonymous to the “banned” word “Chingky”? Because many a time it’s confusing, is it a location or an identity, or an identity of a location or a location of an identity from the cultural ethical moral norms of the one asking, for many a time we have been asked in Bangalore, Delhi,Hyderabad, Kolkata, not “are you from North East ?” but “Are you NorthEast?” .

Ps: “mayang” is not a racist word! Let’s defend it. It is a colloquial word for the colonial settlers. It is a word of resistance against the settlers, to discriminate colonialism is not discrimination but to resist.

(This is not the writings or results of a single mind thinking, but results of dialectics, and of multiplicity, of various young minds. The part and product of a network of thoughts, a network called E-hou.)

Condemnation of Mr. Yumnam Devjit for communal provocation against Pangal minority of Manipur