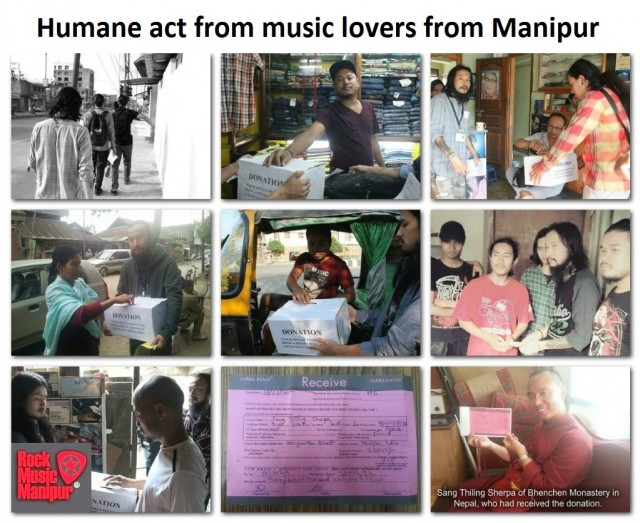 “We started off our donation campaign this afternoon in the scorching heat at around 1 PM from Singjamei Super Market at Imphal in Manipur. As we accessed from one shop to another for the fund collection, we came across a lot of good people with good hearts and the response was immense. But we felt a bit discouraged when some people didn’t respond well as we were assumed to be a group of cons; but still we stuck to our motive and moved on with those who helped us.” – remarked (https://goo.gl/gKEdJP) a group of music lover from Manipur on 9th May 2015.

On 25th April, a massive earthquake hit Nepal, and like all of us this group of boys saw what we all saw in the newspapers and TV – the devastation and the lives lost in Nepal. But this group of four (metal) music lovers ? Albert Nongmaithem, Niranjan Sanjenbam, Ranjan Yendrembam and Vavanda Khumukcham, didn’t sit idle like most of us when civilians in the neighbouring country suffered a lot due to the deadly natural calamity. This team of four stood up wanting to do something to help the helpless people. They launched a campaign by the name ? ?Help NEPAL by music lovers of Manipur? (https://goo.gl/IhQVWz), and started to collect money from fellow friends, from the music community, from shops in and around Imphal.

The donation they got are not from the elite class but from the common man (music fans/ supporters, bands, jam room/ recording studio owners, musicians, music community, vegetable vendors Emas (mothers), auto rickshaw drivers, etc (https://goo.gl/lKCWtJ)), just meagre amounts of 10 Rs, 20 Rs, 30 Rs and 50 Rs (https://goo.gl/2UG8ys). After a month now, they gathered Rs 38,092/-, and have sent to Nepal as a relief fund for the affected people.

They are very transparent, nothing is concealed. The contribution list ? names of donors and amounts they donated are all listed on their Facebook page. The transaction details of the amount sent to Nepal (the recipient is Sang Thiling Sherpa, of Bhenchen Monastery, Nepal) are put up on the social network. (https://goo.gl/zgqNhh)

The rock music community of Manipur, India, salutes this humane act of this group of music lovers from Manipur. In far away Switzerland too, there are a bunch of music lovers spearheaded by Randy Schaller, under the banner ?Metal for Nepal? who are playing concerts, recording songs to raise fund for the earth quake victims of Nepal (http://goo.gl/MndVhb). These are few examples amongst many people around the world, who walked an extra mile to help fellow human being, beyond borders and race.

We hope these selfless acts will spread the love and compassion for one another, will inspire people to be more humane and act to help one another.

In a post of May 13th 2015, this team of music lovers from Manipur wrote (https://goo.gl/WdTIJS), “As we were heading toward Deulaland, Imphal, Manipur, in an auto rickshaw, this brother Irabot who was driving asked us about the campaign. When we reached our destination and was about to give him the fare, he refused and said it was a help from his side to the cause. We were moved thinking that if this person who is merely an auto rickshaw driver could donate then why can’t everyone else?

Written by Ringo Pebam, on behalf of RMM, the rock music community or Manipur. (https://goo.gl/4rjwLe).