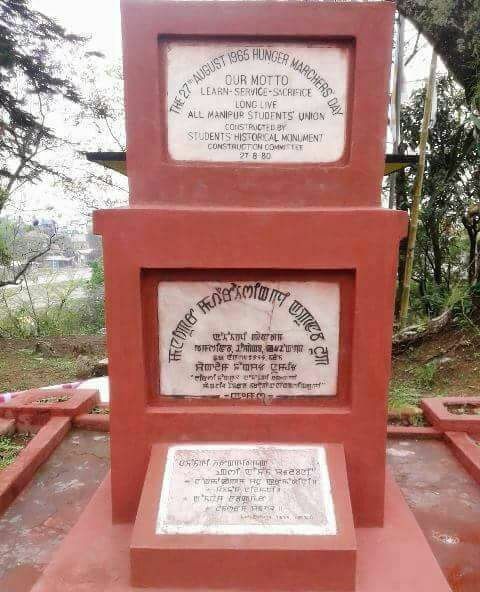 After the so called first and second Nupi Lal (women’s wars) against the malpractices of the respective regimes in 1904 and in 1939 during British rule in Manipur, the students’ uprising of 27 August 1965 was the biggest movement against the injustices meted out by the government in the post-merger period in Manipur history. Besides being a revolt against the artificial famine created by rich businessmen in collusion with the then government, it signified an expression of people’s intent desire to live with dignity, self-reliance and self-determination within the framework of Indian Constitution.

Friday, 27 August 1965 is a red letter day for Manipur. It was on this historic day in 1965 that students protesting against the artificial famine created by the then government were brutally charged and some of them even killed inside the compound of the then Chief Commissioner of Manipur.

Nabakumar, Nilamani and Pramodini sacrificed their lives on the spot for the cause of the people. Laishram Chaobhal Singh (of Lamphel High school) succumbed to his injuries on Sept 26, a month after the incident. Among those who sustained bullet injuries were Laishram Mangi (Imphal college), Kumar and Budhi (both of DM College), while N. Ibohal Singh was seriously injured in lathi-charge. The rightful demand of the students for right to food was responded with bullets of the then government forces. The unfortunate event gave birth to the All Manipur Students Union (AMSU).

On 28 August 1965, a meeting of students presided by Nameirakpam Madhusadan Singh was held at the residence of Leihaothabam Saratchandra Sharma at Keishampat Laisom Leirak, leading to the formation of AMSU. Next day, the first Executive Council of AMSU was constituted at a meeting held at Uripok Tourangbam Leikai (residence of Gurumayum Jatishwar Sharma) and presided over by N. Birendrakumar. Shri Thiyam Gambhir and Loitongbam Tombi Singh were elected as the President and the General Secretary of the 36-member Ad-hoc Executive body of AMSU. Shri N. Birendrakumar, H. Joykumar and M. Manikumar were the Joint Secretaries.

On 12 September 1965, a meeting of all the students of Manipur held at M.D U hall elected the second Executive Council of AMSU. 17 student leaders who were released from jail on that day were also present in the meeting. Shri Sanajaoba Naoriya, Shri Thiyam Gambhir and Shri Gurumayum Joykumar Sharma were elected as the President, the Vice-president and the General Secretary of the Council respectively. Shri Loitongbam Iboyaima and Shri Meinam Manikumar were the Finance Secretary and the Publicity Secretary respectively.

On 10 February 1966, the Constitution Drafting Committee of AMSU was constituted with seven members namely Thiyam Gambhir, Y. Rajen, A.Birendra, Kh. Joysakhi, Jadumani, N. Ibohal and Ksh. Iboyaima. A meeting held at Aryan Theatre on 14 August 1966 took the decision to install a memorial site at Pishum Ching and to observe the Hunger Marchers’ Day on 27 August every year. On 26 December 1966, the Constitution of AMSU was adopted at the 20 Executive Council meeting of the Union held at Paradise Club, Wangkhei.

Shri Leihaothabam Saratchandra Sharma, Huidrom Yaima and Seram Mangi Singh were the President, the Vice-President and the General Secretary of the Union duly elected by the students under its new Constitution. Other members were L. Khuarileima Devi as Finance Secretary, Moirangthem Santikumar as Publicity and Information Secretary, Kullachandra Singh as Secretary–at-large, and Sanjenbam Sangita Devi as Asst. General Secretary, while G. Gunamani Sharma, RK Memsana Devi, RK Premlata Devi and Momon Devi remained as Executive Members. (Reference: Souvenir published on the Silver Jubilee Celebration of AMSU,1965-1990)

As an apex body of students of Manipur and as a pressure group protecting the indigenous rights of its people, AMSU has been credited with various social and political reformations of Manipur during the past five decades.

On 28 July 1967, a conference of all students (hills and valley) held at DM College raised issues such as emotional integrity among the students of Manipur, role of students in social development, Grievances of students. Paite, Gangte, Zeliangrong and representatives of other Naga student organizations participated in the conference. It was the first pressure group of Manipur to object to the efforts for unification of Naga inhabited areas into Nagaland in 1968.

AMSU strongly condemned the efforts of some Naga leaders for unification of Naga inhabited areas into Nagaland and its endorsement by the then Nagaland Chief Minister T.N Angami. The Union submitted its memorandum to the then Prime Minister of India with its rigid decision to safeguard the territorial integrity of the state.

Among the landmark endeavors of the AMSU during the last five decades, mention may be made of the demands for statehood, establishment of Manipur University, conversion of RMC into a regional institute, setting-up of State Human Rights Commission and inclusion of Manipuri language in 8 Schedule of Constitution. During the students’ agitations on Foreigners Issue in 1980, AMSU reached an agreement with the state government on July 22, 1980 to identify the foreigners with 1951 being the base year. Yet, the agreement has not been implemented by the government for obvious reasons.

AMSU from time to time has been instrumental in controlling the prices of essential commodities in the state, which the businessmen often tried to swell at their own whim. Removal of Armed Forces Special Powers Act. has long been a demand of the students of Manipur under the banner of AMSU. The birth of All Manipur Students’ Union on 28 August 1965 was indeed a turning point in the journey of the Manipuris towards identity construction.

Besides revolting against all kinds of human rights violations including the infamous cases of Sanamacha, Bijoykumar, Manorama and other numerous events, AMSU has been putting efforts in safeguarding the territory of the state for the last many years. On various other occasions, the students’ body rose in revolt against the tendencies of splitting the state’s territory.

During the last five decades of the existence of AMSU as an apex body of students, a number of young students either sacrificed their lives or fell victim of the atrocities meted out by state actors while undergoing movements for the people of Manipur. On a number of occasions, the central and state governments tend to malign the image of AMSU as antisocial. However, no force could suppress the force of students who have been working for justice and democratic values. AMSU will ever remain synonymous with ‘Dedication and Sacrifice’ in the history of Manipur.

The erstwhile drama “Chaklaam Khongchat” produced by AMSU is still known to be very effective in moulding patriotism among the youths of the state. Unfortunately, the unique creation of the late Director Birjit Ngangomba on the script of G. Joykumar Sharma has been off the stage for the last many years. Students were trained and made to act in the play. During the long training and rehearsal, the actors were made to fast so as to show off the real hunger in them.

No wonder, the play was so real that a number of acting students fell down unconscious during the show. The drama certainly enlivened the spirit of patriotism and sacrifices among the students of Manipur. If the AMSU revives the Drama for continuous show on every Hunger Marchers’ Day, it would surely instill patriotic sense among the new generation.