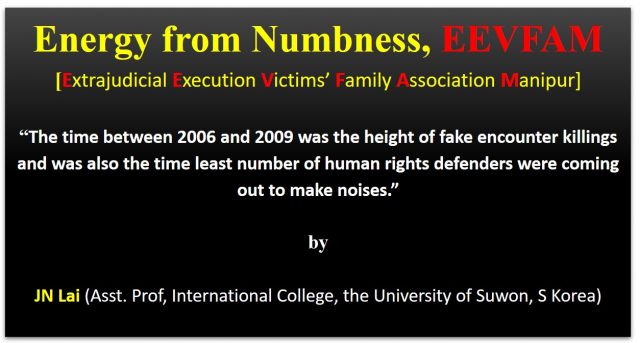 Really I feel good to see “This Tree Alive up to This Way” once sown with my humble hands. The delicate was the seed, the soil also was so dry but drenched with the blood of the young dads, soften with tears of newly married wives. The sustained is the hope that this tree will yield real fruit sooner or later. Keep it up EEVFAM!

That was around the late 1970s–as a little boy, I could sense the air of military phobia in my village. Most of the days were quiet and still. People did not speak loudly anything. The villagers were not going out of their houses for cultivation, fishing and other outdoor activities. One mentally disabled man about fifty was very exceptional who dared out in the paddy field. People whispered about brutal torture on him by the Indian army. Those sun sets were so tense for the silent evening would cast a dark night of sleeplessness. Cannot forget the various facets of militarization and armed conflict that people were whispering around. I remember those scary nights of hearing the army’s vehicles and pounding boots, then daybreak combing operations, separation of adult male from women and day-long torture in the summer heat in the village grazing grounds.

In the early 2000s, as began taking part in human rights work, I was deeply shocked to see the sudden deaths of husbands leaving the young wives at utmost agonies. Most of the widows did not weep; they seemed they were at a loss as the bolt from the blue hit them. The new marriage lives, the hopes, the shared dreams in the light of little kids, all the basic sweetness of life were shattered when their psychological strengths so suddenly vanished. About 70% of the victims of custodial killings in Manipur were recently married to and young fathers, leaving one kid or two. Most of their survived children were of aged about 1 month to 6 years, and many a married wives were survived getting pregnant at the time their husbands were killed.

The violations gave a critical impact particularly on young widows and their children. When the victims suddenly gone, there came a dreadful reality of post-incidents. The socio-economic security of the victim-families was at the real risk. Many of the victims had been main bread earners; they were laborers, cultivators and small traders. Majority of the victim families were economically much challenged.

I was getting into the noises of the first half of 2010; Irom Chanu’s hunger strike, brutal killing of Thangjam Manorama, Mother’s nude protest and Pebam Chitaranjan’s self-immolation. The early 2000s, I began initiating save Sharmila campaign and later joined the journey of Apunba Lup (a conglomeration of 32 organizations of the valley).

As the noise of Manorama and Mothers’ Nude Protest fading out, there sensed a silence which sent shivers down the people’s spines. That was about 3 years in prior to BT Road killing in the summer of 2009. This episode appeared to be a bad nostalgia for military phobia of my younger years.

For desolated Manipur, dismay mornings were breaking, only to let in somber nights soon. The usual scenes of the localities of the victims of fake-encounter-killings were drawn by the mute and tense. The atmosphere was gloom after military and police shot dead people. The apprehension of the intimidations and tortures often smeared the locals’ faces with fear, and in no time silence loomed despite some noises that triggered by the tears of the deceased families. Chills were instilled by the presence of camouflaged sepoys and AK 47-police commandos around the victims’ residences.

The prolonged military activities fractured million minds and snuffed out over thousand lives. People were getting tired of protesting time and again, their noises got fizzled out. Impunity is one strong gag that has discouraged the people while encouraging the perpetrators getting away scot-free.

We were of really meagre size of human rights defenders visited the victim families and documented the cases. The predictable intimidation from the government military and Police Commandos, and life risk exposition to them always gave us hypertension. Our expectation of concerted noise from locals and civil societies found belittled owing to state suppression and also due to personal cleverness among the civil societies and NGOs that guided themselves to safe corners.

The time between 2006 and 2009 was the height of fake encounter killings and was also the time least number of human rights defenders were coming out to make noises. The only support we got during such tyranny was from the local journalists in the form of news-reporting. Usually based on their reports we were sneaking into the victims’ places for documentation and counselling. To Access and meet the victim families was very tense and tough job as the police commandos and military personnel were alert virtually everywhere. We were trying to avoid them as much as we could. To meet them and answer their questions on the ways was a matter of playing with fire. Carried out the jobs taking great risk on our own because human rights people were normally perceived as enemy by the perpetrators for the obvious reason that we were working for the victims. We did not have any authorized support, recognized identification papers alike.

A concern in my mind got ready to flip wings as the military phobia gaining its best weight. I was looking out any collective energy to subside the fear effect in encountering the fake-encounter-killings happening on daily basis. Finally, some local journalists, politicians, lawyers, rights workers and senior citizens were solicited to come to a table. The initiative floated a group called Legal Protection Centre in January 2009. Khaidem (Ta) Mani was the president and I coordinated the centre. It pulsated some morale warmness to the victim families and rights defenders.

I started family visit of fake-encounters on my old Yamaha motorcycle with a colleague in the early 2000s. Ever since I had been planning to bring up the victims’ families from the traumatized surface up to the platform of campaigners. We collected copies of victims’ photos, school documents, the families gave us best information they could recollect and shared their emotions well and extensively.

During a fact finding visit, I met one energetic Loitongbam Sarat, father of a fake-encounter victim from Singjamei. His 34 year old son, Loitongbam Satish was killed by a team of Thoubal Police Commandos and 23 Assam Rifles on 18 May 2009. As he began showed his concern to involve in fighting against the ever rising extrajudicial execution in Manipur, I shared the information of the unfair deaths which had been documenting since 2004. He took a good responsibility to concertize an organization. I coined it EEFAM for Extrajudicial Execution Family Association Manipur. (Pabung) Sarat added V for Victims’ thus shaped EEVFAM on 11 July 2009 finally.

The voluntary association with Human Rights Alert, CORE Manipur and documents from COHR and HRNL were considerably productive which made me possible as an Executive Director of Human Rights Initiative to publish the first ever report of fake-encounter cases and data of Manipur. In 2009, Human Rights Special Report Manipur 2009 was produced with the great assistance of People Watch, a well-known Indian human rights NGO.