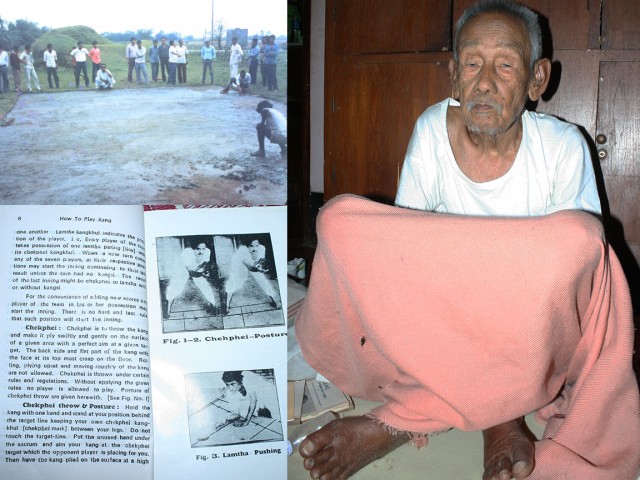 Kang Shanaba is a rare and dying indigenous game of Manipur which was traditionally played beginning from Shajibu Cheiraoba (Manipuri New Year’s Day) till the Ratha Jatra festival.  With declining patronage and players, playing of Kang has declined drastically thereby compelling the indigenous game to disappear gradually from the soil. After the death of the few existing veteran players, the future looks bleak for the unique indigenous game. Decline of such a rare indigenous game is tantamount to lose the cultural values and aspect of the Meetei ethnic. Among the veteran Kang players, Khongbantabam Tolhal is a living legend who has contributed most part of his life towards promoting the indigenous game.

What is Kang Game?

Kang is normally played on the well-polished earthen floor of a big out house. Fixed targets are hit with kang (a flat and oblong instrument made of either ivory or lac). Normally each team has seven male partners. The game is also played in mixed double contests conducted strictly during the period between Sajibu Cheiraoba (Meetei New year day) and Rath Jatra festival. In early days, the game was played using kang (seed of a creeper, the original object of play). In modern days, the object of the play has been substituted by a kang made of lac. At present, the kang is an oval object made of lac or lead with a spot of ivory in the middle, the shape and size of which are now laid down in the book of rules. The target, too, has been standardised and has to adhere to a certain shape, size and weight.

Tolhal who is also a good painter, joined Tombisana High school as a drawing teacher. However, he taught Manipuri, Geography and English in class IX and X level for which he was paid a monthly salary of Rs 23. He learnt painting from RK Chandrajit Sana (RKCS). When his school duty was over, he used to play kang. He retired from service in 1989.  He did thorough research on the game of kang and wrote a book on kang game entitled Kanglon Lairik which was later on transcribed into English and Hindi. Under the financial assistance from Sports Authority of India, he could propagate the rare indigenous game kang in many parts of the country.

Apart from playing kang, he also had a great passion for drama. At his tender age, he joined drama as an artiste of Navajug Theatre, Uripok established before the onset of World War II. He used to watch the plays of Manipur Dramatic Union which highly motivated him to write historic, social and folk drama plays.  He also joined society theatre under theatre master like Oja Geetchandra (GC Tongbra).

He took part as founder member while setting up Roxy theatre, Uripok in 1944 and acted in many plays of the theatre group. He could win high accolades from the people when the drama Thaballei written by him was staged at the Toxy theatre in 1955. He also took a prominent role as an artiste in the play. Thaballei, Ibemni, O!Nang Oire were some of the prominent plays he penned while working with the theatre group which ceased functioning after 1945. He then joined Arian theatre and dramatized the famous Dr Kamal’s Novel ‘Madhabee’ and B Sc. as director.

He served as vice president of Theatre centre Manipur for 15 years. As assistant troupe leader, he led the Manipuri cultural team to showcase Manipuri Jagoi Ras and Naga dance for the first time in Delhi. Guru Laishram Gourahari, Master W Shelungba and Master Moirangthem Kulla were helpful in leading the troupe to Delhi. In next Delhi journey, he joined the Manipuri cultural troupe as Flute player in the orchestra group.

Contribution as a theatre director

Apart from wiring script, he directed a drama play 336 IPC of Lagmeidong Dramatic Union staged in 1964. He directed the social plays Eikhoisibu Utangbira, Eikhoibu Karamna Higshige of Rupmahal drama. He also trained the students of Tombisana High school in one act drama plays.

Warep, Madhumati are some of the prominent Novels he penned. His novel Imphal Kaba bagged first prize in Know Literature Book Competition organized by Education department in 1970/75 for which Manipur Government bought 1000 copies of the book. He wrote Guide books on Manipuri Literature from class VIII to TDC. Education department was always selecting one or two Manipuri textbooks written by him as syllabus for class 1 to 8 since 1980 to 2000 in every five years book competition.

How the game of Kang is played

Manipuris believe that the kang playing – field represents the ‘ Field of Life ‘. The seven players on either side represent the seven days of the week. The chekphei and lamtha kangkhul are 15 in number on one side and both sides represent 30 days, making a complete month. The first chekphei stands for darkness and the second chekphei represents the day. With the start of the game, the lamtha should be pushed by each player along his own tract (kangkhul), in the correct direction. When the kang crosses the last boundary, it crosses the boundary of life, and a player who does this in the course of play is considered dead (shiba), for a particular type of push. On either side of the rectangular court there is an outer and inner line – 42 ft in length and 16 1/2 ft in breadth. The outer line is called lamtha kangkhul and has seven target points. The inner line, called chekphei kangkhul, has eight target points. The game’s duration is four and half hours, with an interval of 5 mins. At the conclusion of the first half of play for 2 hrs 15 mins, the teams change sides.