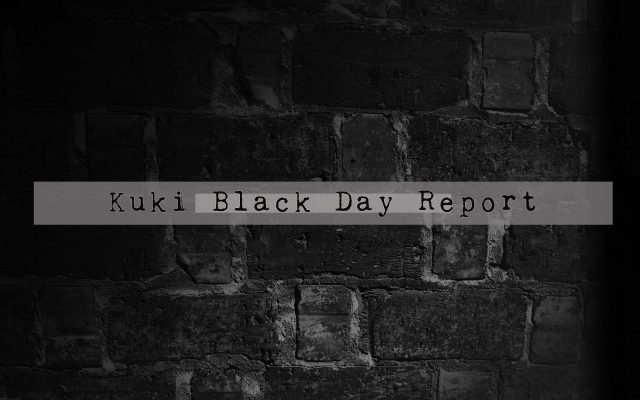 13th September 2016 , Thousands of Kukis today have rallied together in towns and cities to partake in the observation function of SAHNIT NI; and thousands more in the Kuki villages have congregated at churches and held morning church service to offer prayer for the souls of hundreds of people who have met a tragic end in the hands of NSCN-IM.

On 13 September, 1993 the villagers of Joupi and Gelnel were massacred by the NSCN-IM. On this day, 104 villagers (87 from Joupi & 17 Gelnel) brutally killed death recording highest number of death in a single day, as such this day is being observed every year as ‘Black Day’ by the Kukis in conformity with the Kuki customary practise of SAHNIT NI, which is a ritual of mourning for people who died a tragic death.

This year, the Kuki Inpi and KSO General Headquarters have instructed all the Lhang Inpis and KSO branches to organise observation of Black Day in order to draw the attention of the central government over the unrequited appeal of the Kuki people to settle the crime of genocide committed by the NSCN-IM where 905 innocent Indian Kuki citizens including women, children and the aged were murdered; 360 villages were uprooted and more than 1,00,000 villagers were rendered refugees.

Imphal District : Apart from the morning church services in various Kuki pockets in Imphal city, a large function was held at Khongsai Veng Community Hall with Dr. T. Lunkim and Thangkhokhup Kipgen as the main speakers. Hundreds of Kukis turned up to pay homage to the departed souls and pledged to seek justice for the 905 Kukis killed until justice is served.

Dr. T. Lunkim stated that on April 4, 1994 the Kuki Inpi Manipur (KIM) had invited the UNC for a peace deal but the NSCN-IM forbade the UNC from making such a peace deal, rendering the case unsettled, and resulting in further killing of hundreds more by NSCN-IM.

Churachandpur District : Thousands rallied at Peace Ground, Tuibuong under the aegis of Kuki Inpi Churachandpur (KIC) and KSO Churachandpur. Thangkhosei Haokip, President of Kuki Inpi Manipur (KIM) in his speech strongly condemned the lackadaisical attitude of the central government to resolve the issue. He stated that the Kuki Inpi has submitted more than 60 memoranda to the central government but the government has failed to take heed of it. He lamented how the largest democracy in the world with a strong and dignified justice system has utterly failed to settle this crime of genocide and deliver justice. The Kuki people have appealed umpteenth numbers of time to successive prime ministers to settle the criminal act of NSCN-IM in a court of law. But rather than punish the perpetrators of crime the central government rolled out a red carpet to them and signed a framework agreement. The Kuki people can never accept this injustice and are determined to secure justice for the victims of NSCN-IM’s acts of genocide. He warned that if the GOI fails to settle the NSCN-IM’s acts of genocide and atrocities against Kukis, the Kuki Inpi will be forced to decide the future collective political fate of its people.

Similar functions were also organised at 3 (three) other different places at Sangaikot, Singhat and Kukimun (Leimata) by the Lhang Inpis and KSO branches. Dr. Chinkholal Thangsing, Vice President of Kuki Inpi exhorted the people to continue the Black Day observation until justice is served.

Chandel District : In Chandel district the Black Day observation has been organised by Kuki Chiefs Association and KSO branches at 3 (three) different places Tengnoupal, Moreh and New Samtal. Thousands of Kukis assembled at these different places and performed religious services in remembrance of the deaths. Many victims who have survived the genocide narrated their ordeals during those days of tribulation.

Sadar Hills : In Sadar Hills the Black Day observation was carried out at 4 different places at Kangpokpi, Saikul, Kangchup and Sinam Khaithong under the patronage of the Kuki Inpi Sadar Hills (KISH). Besides, morning church services were held at all the Kuki villages to pray for peace and justice. At Kangpokpi, floral tribute was conducted at the memorial site by the people as part of the observation function.

Akhel Aimol, political affairs chairman, Sholun Mate information secretary and Dr. Tara Manchin Hangzo women affairs chairman of Kuki Inpi led the people in observing the Black Day function. Akhel Aimol in his speech at Saikul called out for unity and integrity of the Kuki tribes regardless of the threat by vested interest groups. He stated that the common people have suffered long enough because of these vested interest groups.

Tamenglong District : Under the aegis of the Lhang Inpi and the KSO Jiri-Tamenglong a function was held at Phaitol/Jiribam. Jangsat Haokip President of Kuki Inpi Tamenglong and Rev. Benjamin Shakum, youth affairs chairman of Kuki Inpi Manipur led the people in paying homage to the hundreds of victims who died at the hands of NSCN-IM.

Ukhrul District : Thousands of villagers including chiefs and civil society leaders from neighbouring villages gathered at a solemn function at Tuisomjang village, to observe Black Day.

Many of the victims who have witnessed the criminal acts of NSCN-IM with their own eyes shared their experiences and narrated the ordeals they had gone through. The witnesses recounted the story of how small boys and babies were thrown up in the air and were made to fall on knives and machetes. They also narrated how young girls who were rounded up and raped had their private parts mutilated afterwards. Endless stories of the sadistic behaviour of NSCN-IM cadres were narrated by the victims who have escaped and survived the NSCN-IM onslaught.

Khaimang Chongloi custom & culture chairman and KC Guite legal adviser of Kuki Inpi Manipur led the people in paying homage to the victims.Memoranda to immediately settle the Kuki Genocide were submitted by the Kuki Inpi to the respective government representative of the places.Outside the state of Manipur the Black Day is being observed under the aegis of the respective Kuki Students Organisation (KSO) at Songpijang village (in Nagaland), and at cities like Shillong, New Delhi and Bangalore.