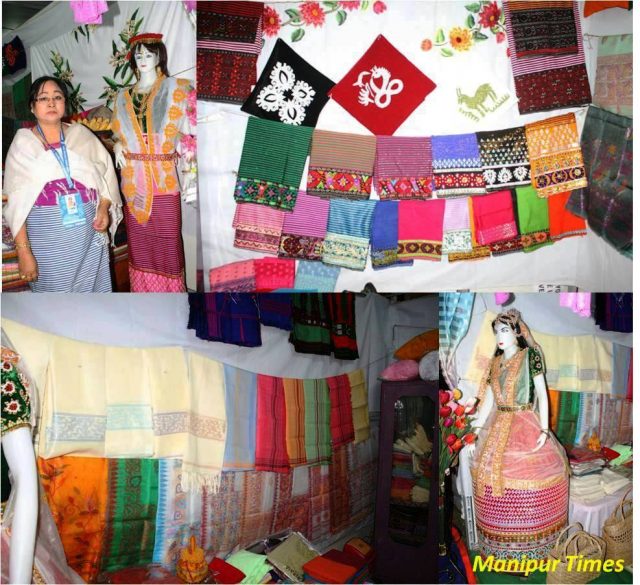 Manipuri traditional fabrics, known for their finesse and elegance, have earned a distinct place among the textile crafts of India. It is the cottage industry in the state providing the highest employment to the women folk of the state. The traditional skill of handloom weaving is not only a matter of status symbol the women folk in the state, but also is an indispensable aspect of their socio-economic life.

Wahengbam Ningol Nameirakpam Ongbi  Babita, 53 years old wife of N Sanajaoba from Palace Compound, Imphal is among the handloom artisans who works to revive and promote the craft successfully. Embracing the art learnt from her mother, she has been working to promote the craft with dedication for years.  She is providing training to some local women trainees who would carry on the craft in generations to come.

Her craftsmanship in Meitei “Potloi” design

She reveals her craftsmanship in designing “Potloi”, traditional attire mainly worn by brides during marriage ceremonies of Meetei community. She designs Potloi, embroidered with different motifs. Now she is launching a new design of Potloi for Meetei marriage ceremony.

“I have been thinking to produce a unique design of Potloi for the Meetei bride with new artistic motifs”, she said.

She has popularized the Manipuri handloom in many handloom exhibitions organized in different parts of the country.

Under the self help group called Babita handloom and handicraft, she works with some local woman weavers. Phanek Mayek Naiba, Mapan Naiba, Rani phee, bed sheets, Inaphee, Lengyan Phee, Wangkhei Phee are some of the traditional fabrics the woman Artisans are weaving.

Under her guidance, around 100 women trainees are learning the craft. The handloom products made with the support from the women workers are sold out to market.  For her, the craft has been a thriving business with the demand of the product increasing gradually. She provides working capital to the local woman weavers who cannot afford to buy a loom or yarn to start their business in weaving  fabrics. The finished products are then collected by her farm for sale to others.

The varied handloom fabrics are available at the showroom  at  Palace compound. Babita has many dreams unfulfilled due to lack of financial back up. She wishes to expand her business so as to benefit more local woman.

Embraced the craft from her Mother

Babita learnt the skill of weaving from her mother and adopted the craft 30 years back. She said that she has been able to supplement her family income from the craft.  Mother of four children, the lady Artisan was completely distressed when she .lost her eldest son who was studying B.Sc at Bangalore due to an illness.

“The demand of Manipuri handloom product is on the rise in both inside and outside the state. I am planning to export the fabrics”, she said.

While lamenting that Manipuris lack encouragement to local, products, she fervently appeals to the people of the state to encourage the budding local entrepreneurs by using the products they make. “We cannot promote our business without local support. When we thrive in our business, we can generate more employment for many jobless and help improve state economy”, maintained she.

Despite Government has already implemented lots schemes/projects and some schemes are also ongoing, Manipur handloom is going back day by day instead of moving ahead by implementing such schemes/projects.  The Govt. has maximum responsibility for this and also the people have some share too. Only throwing stones to the Govt are not the ultimate solutions. We also have some responsibilities to save the decline of handloom sector in Manipur. It is right time to wake up otherwise it will be too late. Govt. need to take some constructive steps or decisions regarding the handloom sector. Maximum weavers in this region are women and also maximum are illiterate so they do not know about the past and existing schemes/projects. It needs to be studied that benefits of the handloom schemes are directly going to the hands of real handloom weavers. The present scene is, some people well experienced in taking government funds by fraud are taking advantages of the schemes while the genuine weavers are not.  Manipuri handloom will not flourish until the government benefits are not reached to the hands of genuine weavers, she said.