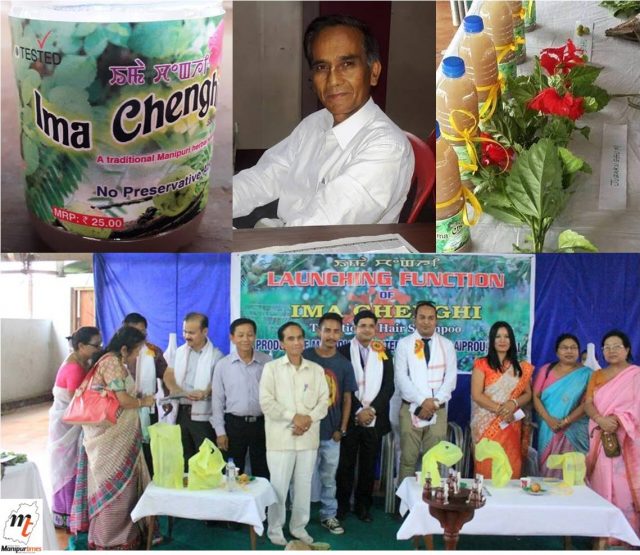 ‘Chenghi’ – a local natural herbal shampoo prepared from the local rice water along with many herbs was once widely used in every Manipuri family, particularly the Meetei community.  Locally available natural herbs are used as ingredient sources for the preparation of traditional natural herbal shampoo referred to as ‘Chenghi’ by Meitei community. The value and tradition of Chenghi is now gradually losing its place in Manipur society with chemical-based shampoos dominating the local markets and Manipuri households. Keeping alive the traditional way of hair care and nourishment, M/s Holistic Enterprise, Sangaiprou Imphal has recently launched ” Ima Chenghi” for the first time in the State.

The new herbal shampoo brand “Ima Chenghi” has been innovated by one government officer turned entrepreneur Sanasam Birendra of Sangaiprou Imphal. He is the proprietor of Holistic Enterprise.

Born to to S Kondum Singh of Irengbam Village of Bishnupur District, Birendra is the eldest son among five siblings (3 brothers, 2 sisters). Currently he lives at Sangiaprou with his family, with his three kids and a wife who is a FHW. He leads a life of pure vegetarian.

Birendra is a BA (Economics) from Guwahati University and he also studied Law but dropped-out in his final year.

Birendra said that efforts of the enterprise were to revive the degrading traditional use of ‘Chenghi’ among the Meitei community. The pure traditional-based product has been duly tested in well known testing laboratories. Researchers have already accepted the values of the natural herbs and ingredients contained in ‘Chenghi’. It smoothens hair, gives silky colour, prevents hair fall and graying of hair besides giving cooling effects and fragrance to hair, he claimed.

He said that local Chenghi, used especially by women since time immemorial in the Manipuri society, possesses the medicinal values. The medicinal value of the traditional shampoo is known for its cooling effects in head and maintaining internal harmony within oneself. However, with changing time, local Chenghi has been replaced by chemical based shampoo brands which affect the natural texture of hair. Hair fall and premature graying of hair are some of the major side effects; he claimed and urged the people to encourage the local product.

In Manipur, local natural herbal shampoo ‘Chenghi’ was traditionally used for a wide range of common hair care like anti-ageing of the hair, blackness, shininess and smoothness of the hair. It is prepared from the local rice water ‘Chenghi’ along with many herbs. In this rice water, natural herbs and leaves of fruit trees are added and boiled it properly. After the ingredients are properly boiled, it is cool down and sieved using a muslin cloth to remove the impurities and the finally collected clear liquid is used as herbal shampoo. After using the herbal shampoo for washing the hair, the hair is washed properly and no oil is needed to apply on the hair afterwards. It is best to use it within 2–3 days after preparation.

The farm is providing employment to around nine people. Ima Chenghi brand has been made available in 26 outlets including Dove Keishampat, palace compound,  Moirangkhom, Chingmeirong, Chingamakhong, Keishamthong, Tiddim road, Uripok etc. The product has started receiving high demand from the people. The product will hopefully popularize the traditional way of hair care and nourishment.

He joined the state commerce and industries department as LDC in 1981 but after three-days from his joining he started working as a Statistical Supervisor in-charge. Later he took the charge of Asst. Director then Asst. Manager and promoted to a Functional Manager. And he has also served as Assistant Director in-charge (on deputation) at the KVIC-Imphal. He retired in 2014 on superannuation. He was such a sincere employee who never misused his authority and neither offers favoritism or nor he accepts any gifts or favours to him by someone in his professional life.  He is a devotee of Lord Krishna living and active member of ISKON, Manipur.

During his 32-years long service, he tried to promote the state Khadi & Village and the state craft persons globally. Apart from Birendra’s main line of duty, he scripted radio documentary-features to promote, inform and educate the state people’s about the state handicrafts, which the programs were broadcasted every Saturday by AIR, Imphal. He has published a book titled ‘Khutheibalaktagi’ meaning ‘The Golden hands of Manipur’, which is a compilation of stories of outstanding craftsperson from the state. He also published many articles on Handicrafts and crafts person in various Imphal-based papers.

“Indigenous people should protect and promote the indigenous products, so gifted by our forefathers. The economically starving state can be developed only when we encourage and love the local products”, he said.

Earlier covered by Manipurtimes Birendra – the ‘Golden Hands of Manipur’