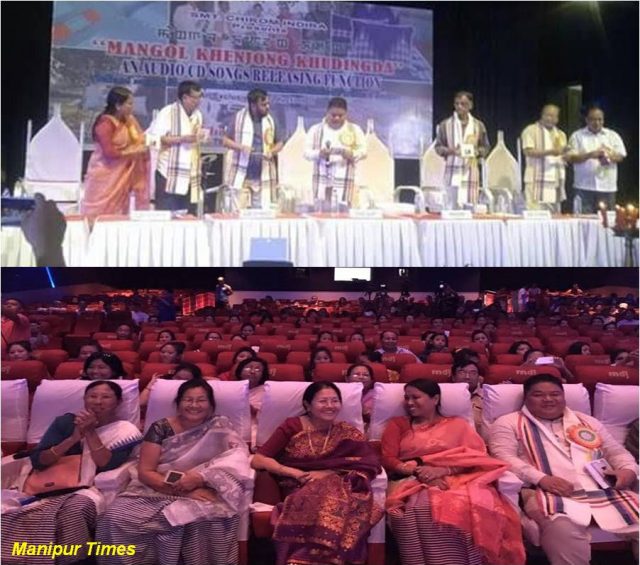 ‘‘MANGOL KHENJONG KHUDINGDA’’ an audio CD songs based on awareness of handlooms & handicrafts products, were released on dated 29th August 2016 (Monday) at Manipur Film Development Corporation’s (MFDC) auditorium hall, Palace Compound, Imphal. There are 5 songs in total, dedicated songs to promote the products of handloom weavers and handicrafts artisans of Manipur. These songs are presented by SMT. CHIROM INDIRA W/o Chirom Sanjoy Singh of Thangmeiband Lairenhanjaba Leikai, Imphal a National Awardee. It was an exclusively production of M/S CHANU CREATIONS, Thangmeiband, Imphal.

Giving tribute to those (weavers) who had made our handlooms alive from one generation to another were touch the hearts of the audience. It shows the unity and how importance our handloom in this modern society as well. The function was started with a very warm well come address by Shri RK Sunil. The president of Thangmeiband United Club (TUC) an apex body of all Thangmeiband Clubs, Shri Brojen Sinam honoured her with a shawl for her achievement in the field of handlooms. She makes us pride and open a new chapter in the history of Indian handlooms. The crowd was so big. All the communities were attended the function. It was an amazing and historic function. Make sure our handlooms has a very bright future, if we supported each other. The presentation of traditional stoles to the orchestra by Ms. Thaisiiru Philip, Proprietor M/s Nane Enterprises of Senapati was also a part of the memorable moment of that function.

The team of the Chanu Creations were organized the function very politely and systematically. It was one of the best function ever for the awareness of our Manipur handlooms. All the songs are very meaningful and touch the hearts. We are sure and wish let these songs may brings a big impact to the society. Her creations, her thoughts, her contributions and her efforts towards the development of Manipur handloom sector is highly remarkable and appreciable. We have seen her hard works, patience and focus on to promote our handloom products to the national and international markets last many years.

She said ‘‘ Our hand woven textiles are main source of our tradition. Each communities has its own designs, textures and motifs. It is our backbone. The crafts is woven with culture and spiritual beliefs of the natives of Manipur since time immemorial. But due to social changes incorporated with modern technology, the traditional hand woven textiles of Manipur are few to be found and they are rapidly changing in terms of designs, motifs, yarns and processes. Traditional dyes have been completely replaced by imported synthetic dyes.  The main purposes and objective for the  production of this CD songs  ‘‘MANGOL KHENJONG KHUDINGDA’’ was to attempt towards the preservation, protection and promotion of our hand woven textiles before they are completely depleted. I always focus on the condition of weavers, woven traditional craft and also focus to improve the socio-economic condition of the weavers whom weaving is the main source of income’’.

Smt. Chirom Indira was born at Sagolband Sayang Kurao Makhong, Imphal of Manipur. She is a Graduate from Manipur University and has a professional qualification  Diploma in Handloom Technology (DHT) from Indian Institute of Handloom Technology (IIHT), Ministry of Textiles, Guwahati.

She was the front contributor to the transition of weaving from traditional products to the modern products. Her creations were displayed in various National & International exhibitions organized at different places. She has visited to  Denmark, Greece, German, Belgium, Netherland, U.K, Austria, France and Myanmar for promotion of handlooms products.

O/o Development Commissioner for Handlooms,  Ministry of Textiles, Govt. of India has recognized her efforts and honoured her recently National Award 2015 in Design Development of Handloom Products for the first time in the history of Indian Handlooms. She was also featured in ‘‘PRAYAS’’ a compile success stories in handlooms published by Hon’ble Prime Minister Shri Narendra Modi on the occasion of 1st National Handloom Day held at Chennai on 7th August 2015.

She was member in various committees under the O/o DC Handlooms, Ministry of Textiles, Govt. of India for the development of handloom sector last many years.

Kaiku – a performing and endurable star