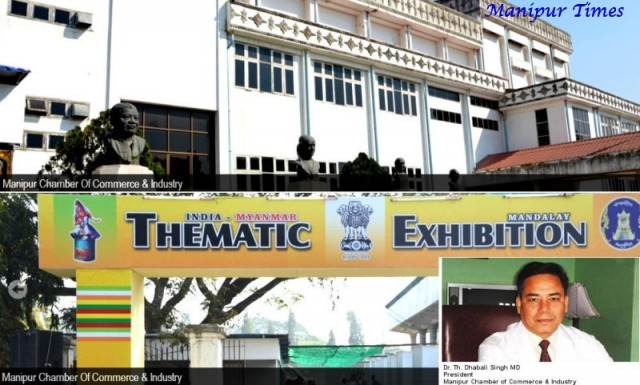 Resource mobilization, knowledge and manpower are to be strengthened first if Manipur has to tap maximum benefits from India’s ‘look east policy’. Moreover, unity, idea sharing and cooperation among businessmen are also necessary. The state government has also a great role to play in this regard. It is encouraging to see that Manipur government is taking keen interest in this regard in terms of development of infrastructure and road connectivity etc that two chief ministers from Myanmar are visiting Manipur to take part in Manipur Sangai Festival 2013 on state government’s invitation. The two chief ministers are accompanied by many businessmen and industrialists of the neighbouring country and it will provide a good room for both the businessmen of the two countries to promote their business. Moreover, it will also help strengthening relations between the two nations.

Thokchom Budhabir Singh, General Secretary of Manipur Chamber of Commerce and Industries, an apex body of the businessmen, entrepreneurs of the state, in an interaction with the Manipur Times, shared his views on how Manipur is must prepare to take the benefits from the ‘look east policy’.

With erstwhile Manipur Chamber of Commerce has gone defunct for a pretty long time, some like-minded entrepreneurs, industrialists and businessmen of the state united and discussed the necessity of establishing an apex body that would safeguard their interest as well as promote trade and commerce of the state. After a long and thorough deliberation, Manipur Chamber of Commerce and Industry (MCCI) was established in January 2011 and registered under Manipur Societies Registration Act, 1989. Presently, the office of MCCI is located at Thangal Bazar. MCCI is affiliated to Indian Chamber and Commerce.  The organization’s mission and vision are primarily focused on promoting trade and commerce in the state, and with other states and countries. Besides, MCCI organizes various seminars, workshops, conferences, exhibitions, fairs and other activities for accelerating all round development of the state. Though the organization is still quite young, it has already started taking up activities towards achieving its target. MCCI in collaboration with Manipur Handloom & Handicrafts Development Corporation Ltd., Artisans Cooperative Society displayed handloom and handicraft products of Manipur in an exhibition held in Mandalay, said Budhabir.

“We have no future unless we generate our own income. For an unindustrialised state like ours, sectors like food processing, agro based industries, tourism, legal forest products, healthcare, infrastructural consultancy etc will always have high business prospects from the ‘look east policy’. Running after government jobs alone will not do anything good in the state. Manipur is virtually surviving with the funds from the government of India and it is high time to think how long we should depend on the central government. We need to generate our own income to avoid dependency to others by bringing the sense of work culture. As such Manipur needs hard working and innovative entrepreneurs, businessmen and industrialists, he observed.

MCCI has 35 active members at present.

“So far, MCCI has no non-local member. However, we have invited them to join the organisation. Our organisation is not only for Manipuris or a communal organisation. Membership is open to all the businessmen, entrepreneurs working in the state. Let us unite and cooperate so that we can enhance the economy of Manipur in the light of look east policy”, he appealed.

1. To take up developmental works for the socio-economic upliftment for all communities, women and weaker section in         particular, by way of trade and commerce.

4. To establish production oriented training centres in rural areas for the training of skilled workers with a view to      providing a sound technical base for rural industrialization programme.

5. To promote sound thinking in different fields of social welfare and to contribute to the developing of knowledge in the        field.

7. To establish and maintain hospitals, charitable dispensaries for women and children, maternity homes, child welfare  centres and institutions of similar nature and such similar children’s home and orphanage centres in the state.

9. To bring welfare of the members of the organisation including recreational and medical facilities.

10. To conduct study tours, seminars, meetings, workshops conference, work camps, exhibitions for accelerating the     work for the development of the state.

11. To solicit obtain accept subscription donation grants, gifts request and trusts from any person from bank or local  authorities or corporate bodies like Khadi and Villages Industries Commission and State KVI Board and any institution  and  the union/state government.