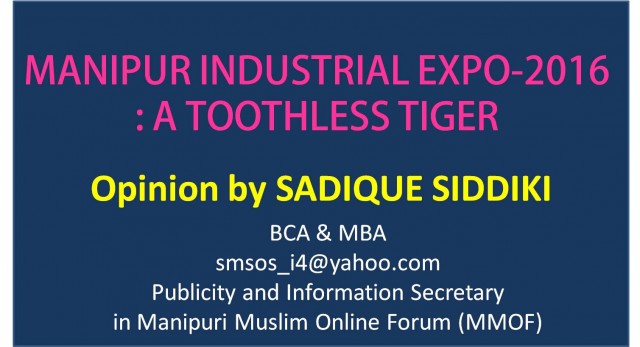 INTRODUCTION: Manipur Industrial Expo, the first of its kind, is ongoing presently at Lamboikhongnangkhong, which is about 6-7 Km away from the state capital Imphal. Notably, the expo is organized by Commerce and Industries Department, Govt. of Manipur along with Ministry of Development of North Eastern Region, Indian Chamber of Commerce and International Chamber of Service Industry. It was flagged off on April 4, 2016, by Shri K. Govindas Singh, Hon’ble Minister, Commerce and Industries, Government of Manipur under the theme – “Make in Manipur for Employment Generation”. The event is expected to be wrapped up by 10th of the same month, marking with the Jewel Fashion Queen contest.

This Industrial Expo has above 600 different stalls, ranging from 90 stalls dedicated for food stalls to handloom and handicrafts, bamboo processing and other agro products stalls etc. It is also noted that enthusiastic entrepreneurs from about 15 different Indian states and from foreign countries like Bangladesh, Egypt, Myanmar, South Africa and Thailand are taking part in the event. Moreover, the most striking part of the event is the announcement of another three Industrial Estates in three districts which are going to be dedicated to public on April 9, 2016, as stated by Hon’ble Minister in his speech.

BRIEF INDUSTRIAL SCENES OF MANIPUR – A RELOOK TO THE PAST: Manipur, as a part of the “NEW INITIATIVES FOR THE NORTH EASTERN REGION” got Rs. 703 Cortes out of Rs. 6,100 crores for the whole North Eastern Region in 1996, to initiate with provisions of rendering Basic Minimum Services and to mitigate the gap of Shadow Zone in infrastructural development sphere. A High Level Committee was constituted as a pursuant to this initiation and it recommended a huge sum of Rs. 1,423 crores for Manipur and also further advocated with a share of Rs. 5815 crores from a pool of Rs. 93,619 crores as estimated for the infrastructural sector. Despite of such facts, Manipur, being unable to come up with a dedicated state specific Industrial Policy, has to utilize in projects like Irrigation, Flood Control, Railways, Power sector, Transmission and other areas of concern. Unfair practices of corruption have also marred the scenario to a great extent and we can’t see any major industry-related activities. It was for such a long time that any of the so-called relevant policy in relation to Industries in Manipur could not garner a major thrust. One outdated Industrial Policy, 1996 has to be replaced by a new one in 2013, which came into force from April 1 of the same year.

The government of Manipur aims to drive industrial growth by attracting private investments and provide an investment climate with better regulations, by removing barriers to unhealthy competition and growth. It has introduced this policy with various components being offered such as incentives; improved infrastructural facilities; supply of quality power; credit flow from banks and other financial institutions; better market linkages and to boost investors confidence. The policy is also to provide an investor friendly environment for rapid industrial development in the state; to generate more employment opportunities and to have significant increase in the state Domestic Products, to explore and enhance the resource base of the state.

The provision pertaining to the aims and objectives of the policy seems to be a stringent one unlike its previous versions. However, when put into consideration for action, various components of unseen contingencies come into picture. And ultimately it leads to a mixture of flops year upon year. This is again not an exception to all those earlier versions. State government has to come up with a rigid state-specific and structured legislation in regard to Industrial Policy sooner than later.

RECENT EXAMPLES OF CONTINGENCIES: Much of the theme for this very event has shattered while officials were trying to maintain the political protocol. It is noted that this event is a vision of Shri O. Ibobi Singh, Hon’ble Chief Minister of Manipur from the welcome note addressed by Shri V.K. Dewangan, Commissioner of Commerce and Industries Department, GOM. However, respected CM of the state didn’t turn up the event.

He also said that the expo aims at promoting the industrial products, handloom and handicrafts spree of the state, agro based food processing industries along with forest products and animal husbandry etc. but failed to affirm the state’s booming tourism sector in such an important event.

Much has to be done in relation to the policy framework of embracing more and more entrepreneurs by showing them possible avenues apart from whatever the people of this state had already explored and excelled. Financial sources needs to be liaison to develop a conducive financial literate society so as more investments would be invited with feasible loan or credit extensions.

The flood like situation in and around the venue forced several visitors to return without even a glimpse of the event. All the vehicles belonging to VIPs were parked in the little-elevated dry area and it made other visitors to walk along the muddy water. Officials have hinted about more than 650 stalls but many of the stalls are left unattended or without even furnished as expected. This is a great failure of the event.

HOW TO SOLVE CINONTINGENCIES IN FUTURE: The following points are needed to be considered in solving similar issues for such events in future. However, whatever mentioned is not subject to be the only panacea and I do invite for constructive amendments from respected readers (if any):

CONCLUSION: Manipur has already acknowledged and experienced 6 episodes of Sangai Festival at International Level, which were overall success although some noticeable glitches over traffic control and crowd management were seen during the event. Department of Tourism, Government of Manipur is successfully and incredibly showcasing the festival in such a way the people in other states and even from foreign countries recognize the height of potential tourism aspects which is endowed with the state. We must proud of it.

However, the first ever Industrial Expo is not up to the expectation we had from its inception as an idea. It is very much for the negligence and weakness of the hosting department, i.e. Department of Commerce and Industries, Government of Manipur. It is also a surprising moment to learn that the hosting department could not garner any knowledge from the State Tourism Department in organizing such an event which is more or less similar to the famed Sangai Festival. Such anomalies validates the ongoing event is better termed as a “Toothless Tiger”. Co-ordination among the departments of the same government is also need of the hour to harness resources for the state to move ahead.

People dwell on throwing in investment with an aim to regain the returns despite of the risk of different quantum. We must have the habit of acknowledging it for we need it. This is the reason

I’ve projected in this piece of article to carry on the home-work well in advance before any of such event. This is of utmost importance since such events will imprint the image of the state into the minds of those respected visitors.

I wish a Great Grand Success for the Industrial Expo-2016; and I wish my dear brothers and sisters of Manipur to have a visit to the expo and make it a grand one. Also, I would like to draw kind attention from relevant authorities to pop in more and more qualified ideas to pull in more investments and also to cultivate a new era of entrepreneurial culture in the state. Let’s make the state boom in industrial sector too.

The writer is a BCA & MBA, and could be contacted at smsos_i4@yahoo.com. He is presently working as Publicity and Information Secretary in Manipuri Muslim Online Forum (MMOF)