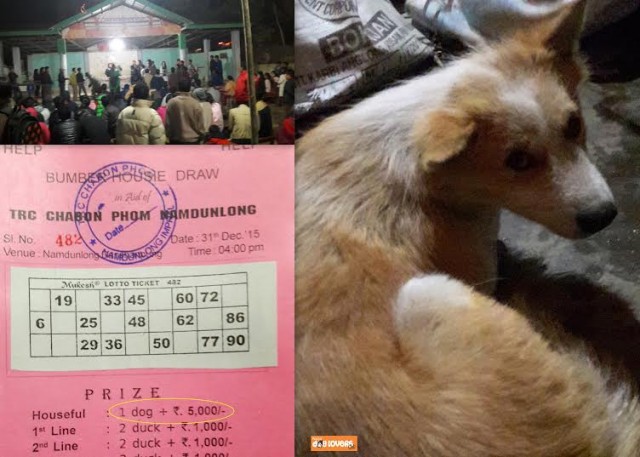 Manipur Dogs Lovers Club have rescued a local dog from being slaughtered on New Year eve. MDLC was left shocked when we were informed that a dog was announced as the first prize for a ‘housie draw’ organized by TRC Chabon Phom Namdulong, a local club in Deulaland.

MDLC sought help from PFA and rushed to the spot with Superintendent of Police Ak Jhalajit IPS of Imphal West. A team led by SI Kiran and SI T. Amal Kumar under the supervision of the SP rounded the venue and rescued the dog and 12 ducks. Police also seized tickets, PA system and tambola. A written complaint was lodged with the OC of Imphal West PS.

Seven individuals who were involved in organizing the event were detained. Of them, Golmei Tamphajao (40) S/o G.Goro of Namdulong and Phomei Athiam (45) S/o Namgaldai Phaomei of Namdulong were arrested. The accused were produced before CJM Imphal West at her residence on January 1. The family of the accused brought their lawyer for defence but they pleaded guilty. The duo were awarded Rs.700 as fine each based on the Prevention of Cruelty to Animals Act and Public Gambling Act. The dog is now safely homed at PFA’s shelter.

MDLC would like to thank PFA and the police officials for their proactive service and support.

Consider a pet as a family member. Let’s not make Manipur another Yulin.