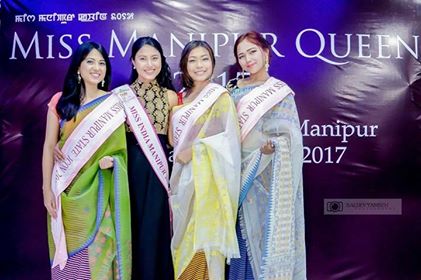 21st March 2017 : MISS MANIPUR QUEEN 2017 was organised by Robert Naorem Studio & Academy which was held on 16th March 2017, Thursday at Class Imperial Conference Hall, Chingmeirong in order to push the talent from every corner of the state and give them the platform to represent the state in the biggest pageant of the country, FBB FEMINA MISS INDIA, 2017 in Mumbai.

After top 3 were selected from MISS MANIPUR QUEEN 2017, final screening was held in Guwahati on 19th March, 2017 where Miss Soibam Kanchan Chanu was crowned as Femina Miss India Manipur 2017 and will be representing the state in Mumbai grand finale. The crowning of the Femina Miss India Manipur 2017 will be held in Kolkata on 28th March, 2017 and after the crowning Miss Soibam Kanchan Chanu will be trained and groomed by the renowned choreographers of the industry till the event in month of June 2017.

In order to support the dream of the contestants, all the expenses incurred are taken care of by ROBERT NAOREM STUDIO & ACADEMY.