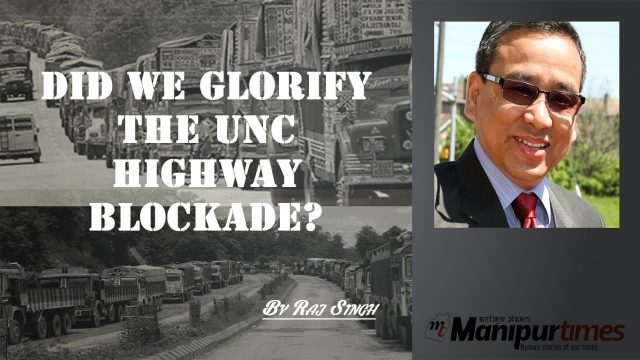 We all celebrated ending of the 139 day UNC Highway Blockade in Manipur on March 19, 2017 with a sigh of relief and praise for the new government in Manipur. But, did we have time to reckon with what price we freed Manipur from the UNC stranglehold?

Highway blockade is effectively used as a protest not only by the United Naga Council (UNC) but elsewhere in the world also by various indigenous ethnic groups. It certainly draws the attention of the government and the public to the cause.

But here is how the UNC blockade in Manipur is different from those in other parts of the world.

In December 2012, the Native Indians in Alberta province of Canada wanted to stop the Canadian government to pass Bill C-45 concerning the land rights of the natives and staged a blockade on Highway 2 in Alberta. About 400 people came out to stand on the highway and distributed pamphlets to the waiting motorists with apologies for the temporary traffic disruptions caused by their action. The leaders spoke to the media – “It is the First nations people (indigenous) standing up for what they know is right and just. The government need to start speaking with us like we are regular human beings.”

The cause was important and sentiments were high.

As a difference, the UNC Highway blockade in Manipur was declared illegal by the courts of India. But the UNC highway blockade in Manipur on two lifeline highways lasted 139 days (more than 3000 hours as compared to 2 hours of Alberta Blockade). The blockade volunteers destroyed vehicles that violate the blockade. The UNC bargained meeting their conditions for ending the blockade holding the entire population of the hilly landlocked state to ransom.

A protest is an expression of dissent on certain policies and actions of the authority for seeking attention and sympathy of the authority and other public so that the cause gets due consideration. A protest is not essentially an ultimatum. As such, a condition like – “blocking the highway until demands are met” is unethical and illegal.

Why couldn’t UNC highway blockade be a token disruptive protest for a few hours or one day? The obvious reason is that UNC is fighting for a cause the legitimacy of which is still questionable. Their cause is linked to legal and constitutional issues. The question of Naga versus state over land ownership is not settled. The Nagas denying ownership rights to the Kukis in Naga dominated areas is disputable. The validity of the district creation order argued by each side linking to the land ownership and decision making procedures has not been put to legal scrutiny. Nagas have not challenged the district creation orders at the court and instead looking for settlement through negotiation. How can a legal or constitutional matter be settled at the negotiation table without adjudication by legal authorities? Can such a negotiated settlement be considered a precedential law in future? If not, what will be its repercussions on similar issues with other ethnic groups in the state?

When these questions remain unanswered, the UNC blockade has been handled by all concerned in the worst possible manner with so many harmful effects on the society like, killing the rule of law, polarising people, causing ethnic hatred and the worst of all – glorification of the blockade.

The blockade was declared illegal by the Manipur High Court in congruence with the Supreme Court ruling. Two leaders of the UNC were in jail under a legal action of the previous government for their activities linked to the blockade. The Congress Party while in power before the election wrote to the central government to declare UNC as outlaw. A score of peoples’ organizations pleaded the UNC for lifting the blockade.

After all these hullabaloo, the new BJP government with all supports of the union government and all its armed forces took a decision to “appeal/request” the UNC to lift the blockade. Both the state government and the central government yielded to the UNC condition that the meeting should be in Senapati, not in the state capital where the seat of the government is located.

Creating a negotiating space by way of stepping back from the hard stand is understandable as a method of conflict management. But it should not be at the cost of the authority of the government over its subjects. I do not think the state government will be going to Ukhrul, Churachandpur or Tamenglong to meet other CSOs for negotiation of other issues in future.

There are further signs of the UNC bringing the government to its knees while signing the agreement. For instance, agreement number one registered that the government “recognized the grievances of UNC vis-a-vis the non-adherence to four previous MOUs” and agreed to consult stakeholders to redress these grievances. This means, the agreement reaffirms the original demands of the UNC on district creation without a saving clause of examining the demands in the light of constitution and administrative law.

Similarly, at agreement number three, while committing unconditional release of the UNC leaders, the government did not use any words of respect for independence of the judiciary thereby diluting the sanctity and authority of the judiciary system.

The agreement number four records that the next tripartite meeting will be held at the “political level”. This raises questions if a dialogue between the government and a CSO can be technically a political one or the discussion on an executive order of creation of new districts a political agenda.

Nowhere in the agreement, UNC or the government reckoned the public grievances during the long spell of the illegal blockade.

The last line of appreciation of UNC praising the government for coming out to address the “core issue” wears expression of a dominant UNC in its official communique of the organization.

Emboldened by the spineless, disorganized and insincere efforts of both the union and state governments during the past four months of the blockade, the UNC is very likely to ask for roll back of the district creation orders in the next negotiation. The new government will set a very bad precedent of invalidation of a government order at the pressure of a Civil Society Organization. It should be done only when the legitimacy of the district creation order is decreed by a court negatively after litigation. The government can encourage UNC to challenge the orders at an appropriate court if the latter sticks to its original demands.

The new Chief Minister declaring removal of the Highway Blockade as his priority number one showed his disorientation of vision and action only to glorify the illegal highway blockade. There are other much more significant constructive agenda like viz., resuscitation of Autonomous District Councils and Block Panchayats for development of hills and rural areas; implementation of Lok Ayukta Act for eradication of corruption; setting up of Staff Selection Commission for bribery-free recruitment etc. that should lay the foundation for actions to fulfil his promises of a corruption-free and equitably developed society in Manipur.

It is understandable that the new BJP led coalition government was caught unprepared for a dignified dealing of the horrendous and irresponsible form of protest. But, we need to be cautioned that glorifying an illegal protest can invite a longer blockade in future in the sequence of championing 121 days by Kukis in 2011, 139 days by Nagas in 2016-17 and another longer