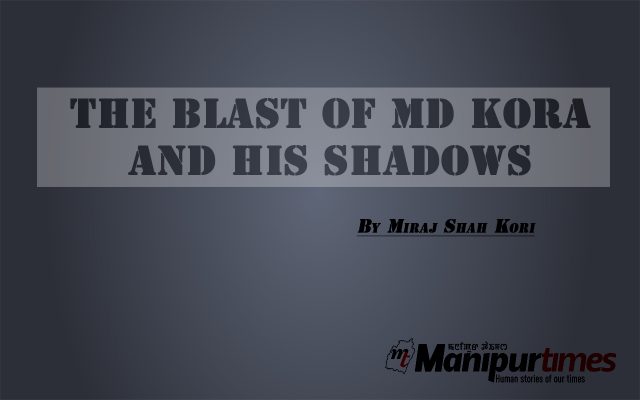 This is the story how the sangai festival was decorated with the red blood of a poor rickshaw driver which was being celebrated to promote Manipur as a world class tourism destination which showcased the best of what the state has to offer to the world in terms of art and culture, hand-loom, handicrafts & fine arts, indigenous sports, cuisines & music, eco & adventure sports as well as the scenic natural beauty of the land.

The day when poverty has driven this poor old man out from his rented room with a rickshaw plied it on hire to earn for a meal for his wife and son meet his last hour in a morning. That morning claimed his soul blasting him with a gifted bomb paying his only assets, his soul for which he earned his livelihood by sacrificing his sweat and blood. His lunch was served for the day with his flesh and body part scattered around him decorated on the bloody plate of dust.

It was happened six years ago on November 30, 2011 in which this rickshaw driver was killed and four other people including two women sustained injuries when a remote-controlled bomb went off near the main gate of the ongoing Manipur Sangai Festival, 2011 at Hafta Kangjeibung at around 11 am .The deceased rickshaw driver was Md Kora 55 years s/o late Ibobi of Mayang Imphal Irong Umang Leikai but staying in a rented house belonging to one Md Sanajaoba at Hatta Golapati for the last 10 years. Md Kora plied the rickshaw taken on hire on daily basis from one Okram Jilangamba of Kongba Nongthombam Leikai. He left behind his wife, Pishak and a 10-year old son,Imran. Pishak is a vegetable street vendor in Khwairamband Bazar. Sometimes she sells plastic basket at the street which belongs to non-Manipuri shop.(source .news report)

The bomb, which was suspected to have been kept inside a carton box, was said to have been loaded in his rickshaw by one who identified himself as a member of the proscribed KCP from near New Checkon crossing with the instruction that it should be taken towards the festival venue and gave Rs 20 to Md Kora, who apparently did not know anything about the content of having a powerful bomb, for carrying the box. However, as the rickshaw crossed the main gate, the bomb went off. The impact of the blast was so terrible that both the legs of Md Kora were severed from his body at the explosion. One of the severed legs was found near the drain of MB College while the other was found lying around 20 meters from the blast site.

The rickshaw driven by Md Kora had also been blown up into pieces. According to some eyewitnesses from the news reports, amidst the smoke emanating from the explosion; Md Kora was seen lying on his back among the mangled parts of his rickshaw. Perhaps stunned by the explosion, Md Kora did not make any sound nor  show any sign of pain. After lying in that position for about 5 minutes, Md Kora started moving and waving his hand as if asking for help. Despite both his legs severed from his body, Md Kora managed to support himself by holding on the handle of the damaged rickshaw. 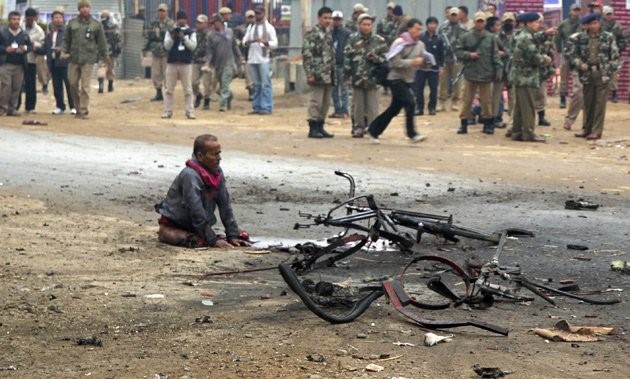 1.Cheerleaders of the moment with the protagonist if they are no body to help him

That was a horrifying scene with the terrible consequence of the bomb in which the situation explained the uneasiness to believe all his five senses. However he could understand the eyes of people around him but they were reciprocal to feel the pain of Md. Kora. Although many security personnel were seen in and around the festival ground, none came forward to the rescue of Md Kora. The deplorable situation was again unfortunate for him when a 99 percent injured body was asking for help and no one including the security personal had come forward to respond with any sort of empathy or sympathy of human being to this poor man.

After a few minutes, a team of Imphal West District police led by Additional SP Birbabu went up and interrogated the injured rickshaw driver as if he was like Dawood Ibrahim instead of shifting him to a nearby hospital or giving him any aid so that he can get a chance to held his life in his eleven hours of departing his soul. The safety and security of the citizens is not the priority but the interrogation of Md. Kora on the dying bed is for the Manipur police.  In the conversation, Md Kora said without showing any sign of losing consciousness that he was given Rs 20 by one unknown person who identified himself as a member of the proscribed KCP for delivering some goods towards the festival venue. After about 20 minutes of questioning at the blast site to this injured man who had lost both of his legs where his body parts were scattered around him and people were watching as Sumang Leela. Manipur police department could not arrange an ambulance in the heart of the capital city that the injured rickshaw driver was taken in a DI Tata of the police for treatment at JNIMS where he passed away at around 11.50 am. 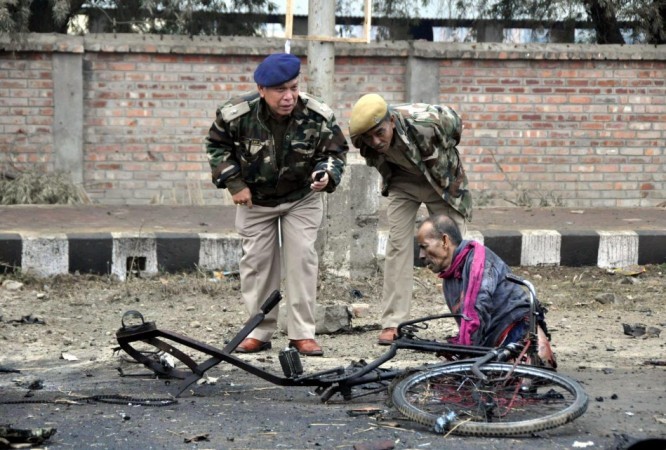 2.The scene of the interrogation of Md. Kora by police officers on the spot of the bomb blast.

The four persons who sustained injuries in the blast have been identified as Chabungbam Bidyapati (24) d/o late Bihari of Awang Khunou Mamang Leikai, Yumnam Bala (50) w/o Rajendro of Konthoujam Awang Leikai, Md Sattar (20) s/o Atou of Moijing and Wahengbam Kulladhwaja (42) s/o Lalabi of Kangla Uchonkhong.Bidyapati is a recruit of North East Security Services and she was manning the ticket counter of the festival while Bala came to see the festival when the explosion took place. Bidyapati was hit by bomb splinters on her right hand while Bala on her right thighs..

After the explosion, DGP Y Joykumar present Deputy Chief Minister of Manipur, Senior SP of Imphal East L Kailun, Senior SP of Imphal West Clay Khongsai, other police officers, bomb experts, Assam Rifles, Army and BSF and National Security Guards who were in Imphal in connection with the planned visit of the then Prime Minister Dr Manmohan Singh, rushed in for spot inspection. Tourism Minister TN Haokip and other government officials also arrived at the spot for inspection. All of them had witnessed the incident that how this poor rickshaw driver was killed.However no assistance or any affirmative measures had given for that widow and orphan.

Although police claimed that KCP (MC) had earlier given restriction on organizing any sort of entertainment programme, no one has claimed responsibility for the blast till the time of filing this report. Followed by the incident, JAC against the killing of Md.Kora  was formed and submitted a memorandum to the Chief Minister in connection with the incident wherein it expressed its demands. The State Government should book the culprits and compensation of Rs 10 lakh should be given to the bereaved family of Kora and also a suitable Government job should be provided to the family. 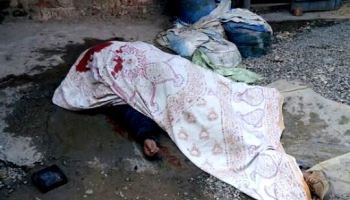 3.The dead body of MD. KORA after he passed away on the way to hospital

The widow Pishak and the orphan Imran have been struggling to survive after the dismissed of Md. Kora .They are still staying in the rented room where they couldn’t afford to buy a new house anywhere in Manipur. Their livelihood has been earning from what Pisak get from her daily  work where she use to sell the plastic basket of Non Manipuri shopkeeper at the Bir Tikendrajit Road .She is sharing the profit with the shopkeeper with which she buys rice and meets other expenses. She earns about Rs 100 on a normal day.

On the days of strikes, her child has to go bed without food. Her earning is seriously affected by the frequent general strikes and Bandh. And like many other street vendor at khwairambandh, she is also subjected to face the atrocities of city police and VDF. These made her to earn their daily bread and to afford the admissions and tuition fees of his son. She is struggling a lot to meet the requirements of his son’s education.

Md Kora’s son Imran has grown up now .He is now studying class in ten standard, I had witnessed many of difficult times this kid had faced. Imran has been known to me since my graduation days at DM college of Arts as my student. He was admitted to our coaching center without any fee which was running during my graduation days at Imphal .He was more mature than his age. He was brave and can talk freely about their family and his father .He is hard working and precocious .Despite of all these hardships he has been facing, he is very good in his studies and stood among the top fifth  in his every  school exam.

I had sensed the frustration he went through that affected his studies at various instances. He was so young and under qualified to experience all these suffering in his age where most of his friends where enjoying the lap and warmth of their parents demanding the moon and the stars. The poverty and the bomb blast had   swallowed his happiness. He is still working hard against the entire disadvantage and the idle sneer of the world. This boy is expecting the help of the ALMIGHTY ALLAH (SWT) to realize his dreams and to rescue from their despair and pain.

Talking about the family Imran said, ‘‘my mother has spent nearly fifty thousand to meet the expenses of the lawyers and other people who are associating with her work for the ex gratia of my deceased father from the Government. She afforded all this money by borrowing from the near and dear ones in the high hope to return it as soon as the money is received from the Government. However neither a single penny has been awarded nor any sort of affirmative initiative has been extended from the Government of Manipur ,and we are still with this heavy debts”

Critically analyzing the above narratives of past and present of the story, some question can be put as a concluding remark.Why had this KCP faction’s cadre picked up a Rickshaw driver as their suicide Bomber by paying him Rs.20?Why hadn’t this faction of KCP taken the responsibility of killing a poor old man by surviving his wife and little child in a rented room?

Why hadn’t any full swing movement of the so called civil society organization like Apunba lup, AMMUCO, UCM, HERICON, happened against the incident like the movement after 21st July of khwairambandh?

Why hadn’t the government compensated the grief of the deceased family with any sort of affirmative assistance where the same government had awarded the 10 to 20 lakhs of rupees per head of the similar cases?

The poor people are the easy target to pick by the terrorist for their terror activities whenever need arises to confront with their opponent. Md Kora was such victim of Rs 20. For a rickshaw driver, they calculate their daily earning from the total sum up of their every single Rs 20 which is the cost of a kilogram of low cost rice in Manipur. However these terrorist had made Md Kora to pay his life for that Rs 20 which he hope for the cost of a meal. Ultimately Md. Kora paid a heavy price for that holy 20 rupees.