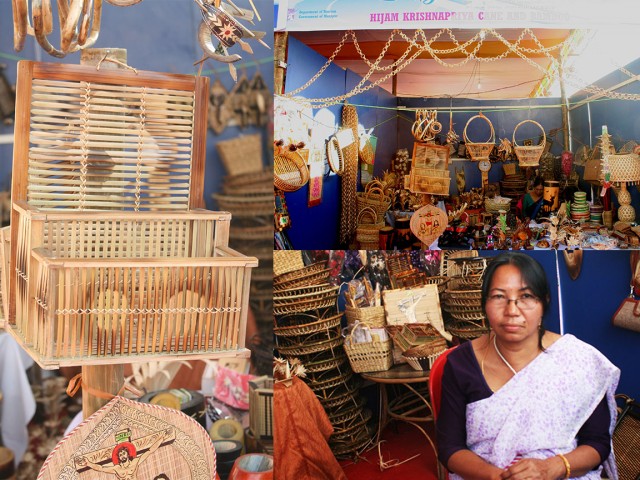 Blessed with the abundance of raw materials and demands from both domestic and international buyers, Artisans in cane and bamboo craft are now able to generate good income for their livelihood apart from providing employment to many jobless persons.
45-year-old Hijam Krishnapriya Devi W/o Shyam of Kongpal Kongkham, Imphal East is a success cane and bamboo Artisan, who makes various designs of decorative items in her firm known as Hijam Krishnapriya Cane and Bamboo Craft.
The Artisan who is employing at least 10 workers showcases the artistic bamboo crafts at Stall No 61 of the ongoing Manipur Sangai Festival 2015.
Krishnapriya was motivated to adopt bamboo craft after she completed a training course in cane and bamboo craft conducted by Institute of Co-operative Management (ICM), Lamphelpat in 2012.
Earlier, she used to supplement her family income as a handloom artisan.
“Apart from handloom, bamboo craft is also one of the thriving crafts a woman Artisan in the state can adopt successfully at home without huge investment,” she opined.
Her husband Shyam is also a bamboo Artisan who extends full support to his betterhalf in the job.
She makes Lukmai, flower base, Shampha, Mora, orchid, lady’s bag, tray, pen stand, decorative pineapple, table lamp etc.
Bamboo varieties like Marubob and Uyee are mainly used for making the decorative craft items. She collects bamboo from Irilbung areas at Rs 250 to 300 a piece while cane is collected from a wholesaler of Sagolband at Rs 50 per kg, she said. Cane has two varieties – Manibi and Yairi.
She said that her workers are mainly women. A worker can earn above Rs 10000 per month if she works seriously. They can now comfortably supplement their family income, she said.