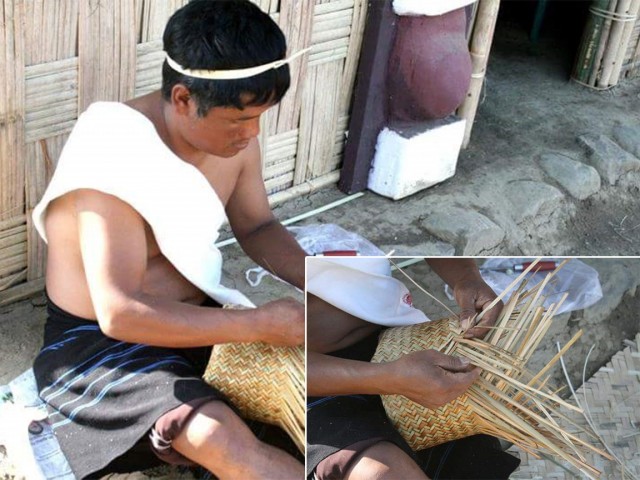 The Chiru tribe is one of the Scheduled Tribes of Manipur having its own distinct identity, tradition and culture. The tribe name “Chiru” is derived from their historical settlement site “Chibu”. They are said to be originated from Falam in the Chin Hills. In Manipur, Chiru is mentioned as early as the middle of the sixteenth century according to Col J. Shakespeare’s ‘The Lushai-Kuki Clan’.
Like other ethnic tribes of the state, Chiru tribe is also known for its artistic handicraft in cane and bamboo. Kh Thoi, 47 years, S/o Amu of Nungsai Chiru in Bishnupur district is an Artisan who makes various cane and bamboo crafts and motif of Chiru tribe in the traditional style. The Artisan demonstrates how the various bamboo and cane craft items are made manually at the Chiru traditional house constructed at the Heritage Park as part of the ongoing Manipur Sangai Festival 2015. He makes various craft items including Thumok (Basket), Meruk (measuring unit of rice), Sham (traditional basket), Shingkluk (fish container) etc.
He adopted the occupation around 15 years back and he is maintaining his family with the income earned from the craft. He said that bamboo varieties like Uyee, Unan, Moubi are mainly used for making different craft items. He learnt the craft from his village elders. When he was a boy, he tried to make a Sepak Takraw ball on his own as he could not afford to buy it.
He bought some canes from the market and made Sepak Takraw balls. Since then he was motivated to initiate the craft.