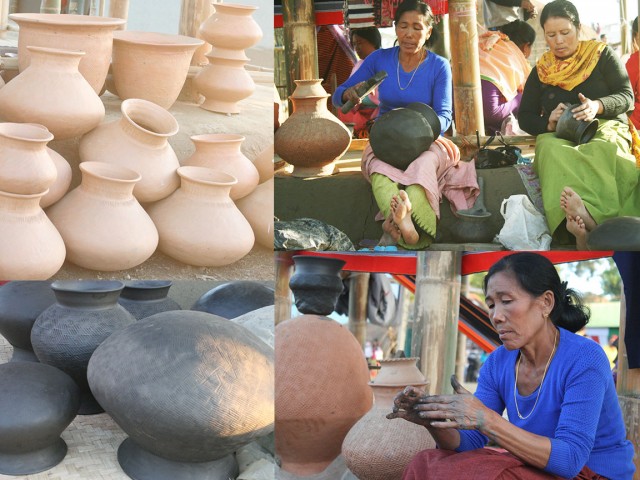 Thongjao is a remote village in Thoubal district dominated by Scheduled Caste people. It is located at a distance of about 45 km to the east of Imphal. The village is known for its artistic craft and pottery.
It is said that people migrated to this village from Thongjao Lok village, another village known for its pottery, around 500 years ago. From the very beginning their main occupation is pottery and sericulture.
During the time of King Garib Niwas, Manipur was in need for people who dealt with pottery and manufacture of salt at Waikhong. So the people of Thongjao Lok were sent for the purpose.
Shamchetshabam Ibechaobi, W/o Samchetshabam Jadumani is a Pottery Artisan from Thongjao Maning Leikai.
She has been in the craft for about 13 years. Pottery is a family legacy for her. The Artisan demonstrates how the earthen pots are created manually at the ‘Meitei Yumjao’, a traditional Meitei house being constructed at the Heritage Park as part of the ongoing Manipur Sangai Festival 2015.
Ngari Chaphu, Eshing Kharung, Yoo Kharung, Ishaiphu, Chengphu, Walong etc are some of the earthen pots she makes to supplement her family income.
She claimed that pottery became a thriving business for her as she could comfortably supplement her family income.
However, income of traditional pottery Artisans have been greatly affected nowadays with the brass metal or steel made pots replacing the earthen pots for domestic purposes.
She lamented that earthen pots are losing its place gradually. With exception to religious rituals, people hardly buy earthen pots these days. The pots she makes are mainly sold to Imphal through the wholesalers.
With the income from the job of pot making, she helps her husband in maintaining the family, sending her two children to school.
Although weaving is the main occupation for the womenfolk of Manipur, womenfolk of Thongjao engages in pottery.
She said adding menfolk of Thongjao hardly involve in pot making. Another Pottery Artisan Shamchetshabam Thoibi Devi, 48, D/o Sh Kulachandra of Thongjao Maning Leikai said that she can maintain her family comfortably with the income earned from pottery.
Her pots are transported in a DI Tata to Imphal for which Rs 1600 is charged as transport fare.