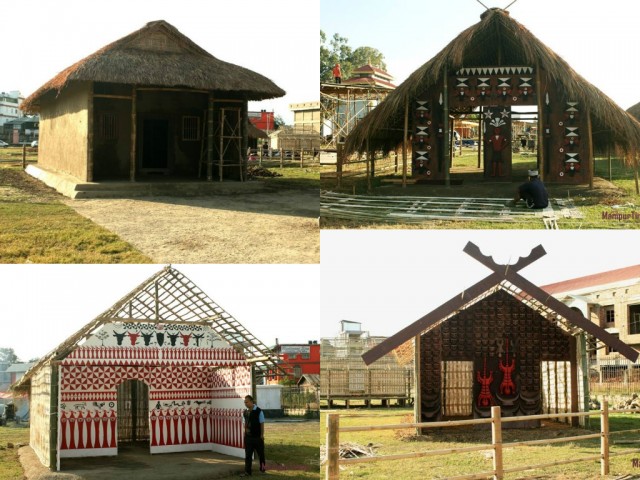 IMPHAL, Nov 11: With the ‘Manipur Sangai Festival 2015’ just 9 days away, hectic preparations are on the way to organise the festival with pomp and gaiety. One of the attractive features of this Manipur Sangai festival edition is the showcase of “Traditional thatched hut Campus” where traditional houses of different indigenous communities settled in the state.

Manipur Government takes up this innovative initiative with the objective of showcasing and promoting integrity among various communities settled in the state since time immemorial. The traditional houses will be displayed with their traditional and cultural attires and handicraft items.

The traditional houses, which are on hectic construction at Hapta Kangjeibung, Palace Compound, are designed by Tribal Museum and Research Centre under the tourism department. The traditional houses include Meitei Yumjao, Meitei Awang Sanggoi, Maring, Zemei, Kabui, Paomei, Tangkhul, Mao, Maram, Komrem and Kuki-Chin-Mizo groups. The houses would be constructed in the exact manner as built in the past and will have all those requisite indigenous looks.

According to an official of Tribal Museum and Research centre, Neo Zen Centre Group is executing the construction work of the traditional thatched huts of different communities after consulting with many experts and historians in the field. As much as 21 well-experienced workers from Thongjao in Thoubal district are being engaged in the construction work of about 15 traditional huts of different communities. 80 percent of work have been completed.

The traditional houses are constructed with materials like bamboos and thatch/reeds. The bamboos used in constructing the houses are of a particular type (large type) which is not easily available. The bamboos are being transported from Jiribam, Tamenglong, Irilbung, Sandangsenba Maring village, Waikhong and Lamlai.
A medium size pond have also been dug up in the “Traditional thatched hut Campus” and a pole wherein a light (lantern) would be fixed on the top of the pole as done in the case of “Mera Wa Yungba” symbolizing fraternity and brotherhood between people settling in the hills and the valley of Manipur.

According to an official of Tourism department, apart from the regular programmes as in previous year, cultural programmes from Asian cultural theatre, Theatre groups from Japanese, Bangladesh, Assam will add as a new flavor to the Manipur Sangai festival slated to be held at Beigyachandra Open Air Theatre (BOAT).
Altogether 250 stalls, including international stalls, mostly of indigenous items and foods will be showcased, the official said dding that the stalls will be given priority to the participants from the State promoting ‘Make in Manipur’, North Eastern States India and foreign countries.

Unlike previous year, the Tourism department will also allot stalls for exhibiting paintings and sculptures to expose the talents from the state.
The famous Manipuri dance ‘Maharaas’ (Raj Leela) will also be showcased at Govindaji Temple on the fifth day of the Sangai festival falling on the full-moon day also known as ‘Purnima’. Raas Leela dance is traditionally played on full moon day in Manipur.
Moreover, the tourist will be given the opportunity to tour the neighbouring country of Myanmar on the Golden Myanmar flights which are scheduled to land at Tulihal airport on November 21 and 26, added the official.

A Myanmar-Manipur cultural conference will be conducted during the season at Chorus Repertory Theatre at Lamboi Khongnangkhong with participations of scholars from across the world. The first secretary Embassy and Minister of Japan, and also High Commissioner of Bangladesh will also be taking part in the upcoming festival.