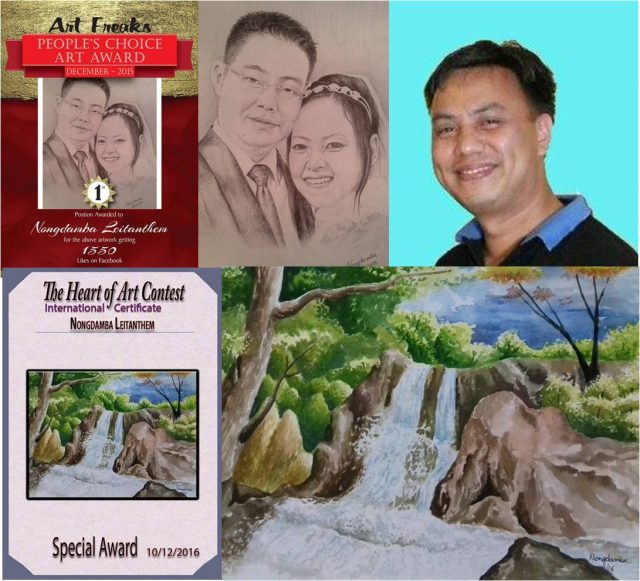 Nongdamba Leitanthem, 35 years old, was born at Kongpal Chanam Leikai Imphal East Manipur. He is sixth son among the seven siblings of four sons and three daughters. He has done his graduate from Modern College in 2014. After the College, he went to Chennai for pursuing MBA – Customer Relationship Management in Annamalai University Tamil Nadu. Presently, he is working as a Senior Master Trainer for Global Art India. Meanwhile, he is also doing BFA 3rd year in Karnataka State Open University

Art Freaks People’s Choice Art Contest  – Nongdamba’s painting got the 1st position in the World Art contest conducted by “Art Freaks People’s Choice Art Contest” in 2015 December. The rules was that all participants should upload their own painting in the facebook group, only one painting should be uploaded & invites their friends to like the painting. Maximum like would be the winner in People’s Choice Award. Within the one month competition period Nongdamba’s painting received the 1st position with 1550 likes, 2nd position got around 1320 from Philippine & 3rd from india.

Special Award in The Heart of Art Contest  – This contest was also done in the facebook group “The Heart of Art Contest”, organizer is from Latsia, Cyprus. Award selection was totally based on the techniques of colour medium. Duration of contest was only 20 days, after 20 days juries would select the winners. Result was announced on 10th December 2016.  Nongdamba got Special Award.

Nongdamba’s paintings and awards
1 of 6