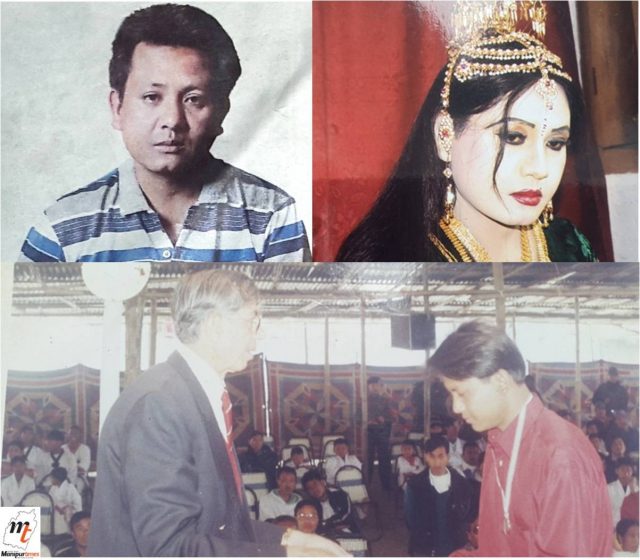 The tradition of Nupishabi (male actors playing female roles) is the most unique feature of Manipur Shumang Leela Art form which takes a great role towards conveying a message to the society on various issues. Nupishabi is an indispensable part of Shumang Leela. It is a big question whether Shumang Leela Art would survive without the role of Nupi shabi artistes.  It is hard to find a talented and beautiful Nupsihabi artiste. Despite their commendable contribution towards upholding the Manipur Shumang Leela tradition, the destiny of the Nupishabi artistes is uncertain as their acting career is very short lived unlike other artistes. With exception to Shumang Leela, these artistes acting female role in Shumang Leela plays have no place in other art forms like films while male artistes have many options, be it acting in films or in other art forms. As such, female artistes need to create a niche during such a short span of their acting career in Shumang Leela.

Popularly known as “Pheidinga Golai Uring Shikpi”, a heroine’s role from one of his Shumang Leela plays “Love 2000”,  Laishram Boy is a multifaceted Nupishabi artiste filled with artistic talents a person could possibly imagine. He is one of the most favorite Nupishabi artistes  of Manipur Shumang Leela.

Born on August 31, 1979 as eldest son to Laishram Gouro, a retired policeman and Laishram Ongbi Ibemhal of Langthabal Kunja Awang Leikai, Lasihram Boy began his acting career in Shumang Leela at his 14 years of age. He made his debut in the audio play Go to Napam produced by Gose Meetei wherein he appeared in the role of Chaobiton. Then he joined Brilliant mass theatre instituted by his local elders in 1989 and acted in the play Irolnungda Mani which was staged during the festival organized by Manipur State Kala Academy.

Boy had a great passion for acting since his childhood. His passion for acting was against the expectation of his police father who wanted his eldest son (boy) to study hard and become a government officer. Initially his father did not allow him to be an artiste and rebuked him many times for defying his words. Every effort of his father to prevent his son opting for acting career went futile due to Boy’s unwavering passion for art. Helpless, his father finally relented and allowed his son to choose the way as he wanted.

He won special award for his role of Radha in the play. After his association with Brilliant mass theatre till 1990, he joined Manipur Co Artistes Association in 1991 and acted in the play Ngasigi Itihas which bagged second best play in the shumang Leela festival.

Boy is working as general secretary of Lamjingba Artistes Assocaition.

He was also associated with Dedicated World Artistes Association for sometime. Later on he joined Lamjingba Artistes Assocaition in 2009. He bagged second best supporting actress in the play Shajibugi Leihao where he acted the role of Leibaklei during the Manipur state shumang Leela festival organized by Manipur state Kala Akademy 2016. He also won Ketawn popuar award, best actress  award in the play Eikhoigi school in 2009, second best  actress in the play Love 2000 and shabi Shanou express in 2004 and Ngasidi Khangle 2006.

Bot who has acted in over 300 shumang Leela plays has been taking main roles in almost plays.  He was popularly known as “Pheidinga Golai Uring Shikpi” from a play Love 2000 and Devajani Shabi from the play Naton Chabi Basanta of Naharol Khongthang Artiste Association.

There is always a teacher behind every success artiste. It is not possible to attain the pinnacle of success without the guiding hands of some dedicated teachers. Boy also  learnt his acting skill under the feet of various prominent Art personalities like Eigya Ibotombi of Irom Meijrao, Niladhaja Khuman, Naba Wareppa, Birjit Ngangomba, Prafulo, Irabot (Mithai Shaba) and Doren of Cosmo drama. He gives credit of his success in Shumang leela to these teachers.

Boy recalled that he faced various tragic incidents while moving from place to place in night time for staging Shumang Leela shows amid the prevailing bad law and order situation. Shumang Leela artistes had to face harassments from the Army found frisking people on the road.

He said that he initially got Rs 70 for a Shumang Leela in the early 1990s. Now one can take up this job professionally as it has been so supportive to one’s income. Over 300 artistes are working under the 14 Shumang Leela groups in Manipur. Unlike the past, Shumang Leela artistes can elk out a living from the job comfortably. However, frequent strictures imposed on shumang leela shows by various organizations have hit the artistes, he said