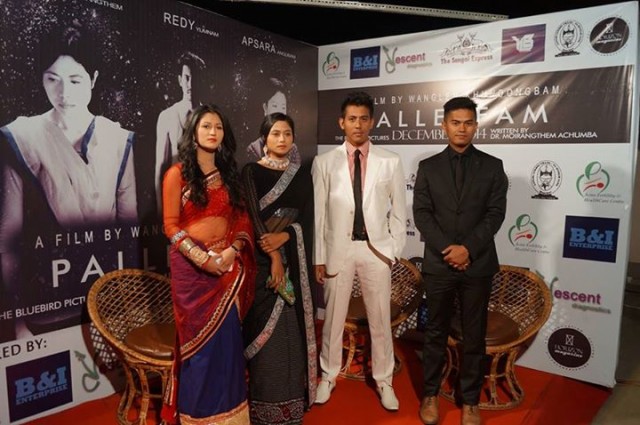 Pallepham – a Manipuri feature film with a unique narrative and stylistic story telling was released at Hotel Imphal by the Classic on 28th December 2014. Deep shots seen in the film and the sequence of the film makes one feel that the characters exist in real. Based on a simple theme, the film is centered on a family with the main protagonists (Role of a husband) often exposed to contemporary lifestyle of merry making and irresponsible approach to living which affected the woman (wife) and child in the family. The film also explores around a dream world where the husband has a beautiful house, a good looking wife and a good position in a corporate company. The film at one point of time with its narrative tool takes the audience to two world through the main protagonist and ends in a progressive note where the main protagonists takes up his profession of wood carving to make a living with his family and lead a happy life in their own way.

The film is produced under the banner THE BLUEBIRD PICTURES and is directed by Wanglen Khundongbam. It Cast Reddymenon, Tonthoi and Sana. Pallepham has no film song in it. The superb sound in the film often takes us deep into the action. The shots were artistic which make it more expressive. Best of all there was no Melodrama in the film.

Mention may also be made that there was a huge applause at the end of the film screening. The Casts and Director is seen in the picture.