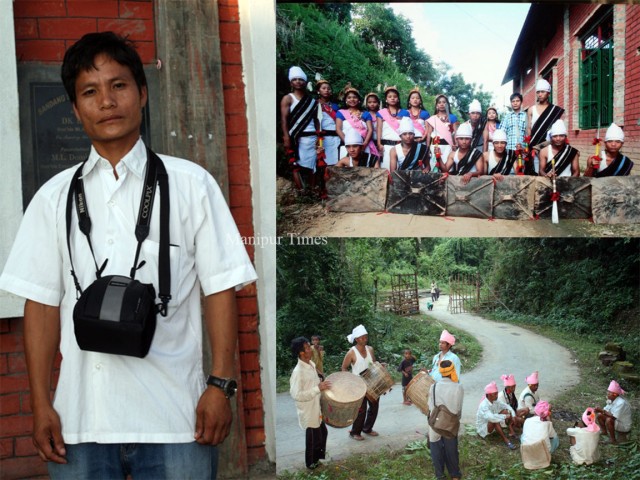 Hailing from Sandang Senba Maring Village in Senapati district, KP Angphom Maring is the son of KP Leidong, a farmer by profession.

Angphong, who inherited the knowledge of Maring culture from his father Leidong, a Maring folk artiste, could realize his dream in the field of Maring folk culture and theatre only after he met theatre director Thanil Leima of Khenjonglang, a popular theatre group in the state. The theatre director, who was once inspired to produce plays, based on Maring folk tales, gave training on theatre to Angphong.

An Arts graduate from United College, Chandel, Angphong used to work in pamlou (field) to support his family though he loved Maring art and culture since childhood.

Regarding the theme of his new folk drama production, Angphong said, “According to a belief of Maring people, Marings first originated from Nungmuisho (cave or underneath the earth), and life underneath the Earth or cave was terribly difficult and hard. They could not come out of the cave as a big stone called “Lungthung” blocked the gate of the cave. Despite efforts to open the Lungthung (stone gate) by sending animals like pig, cow and buffalo to push open the strongly sealed stone gate, they could not open the gate. The flattened nose of pig and the crack marks on buffalo’s horns are believed to have received while trying to push open the stone gate.

Having failed in their efforts to push open the gate using various animals, the Marings finally sent a Shirimpa Bungrang (a black male Mithun). This animal opened the stone gate at last. When the stone gate was opened by the Mithun, the Marings, who were struggling to set free themselves from the terrible and hard life inside the cave or underneath the Earth, could finally come out of the cave and began their first settlement on the Earth at Kulbi-Shongshong, a place which is believed to be located at Kabaw valley of Myanmar. From Kulvi-Shongshong, Maring people gradually scattered to different directions and established many villages, Angphong said.

All these stories are depicted in his newly produced folk drama Khulbi Shong Shong, he added.

Mithun, which could push open the stone gate, is still considered as the only accepted animal for important rituals and ceremonies of Maring people.

He said that Maring tribe is a small tribal group settling in Manipur. The word Maring is derived from Mei (fire) and Ring (to start or produce fire). As almost all the Maring people have embraced Christanity, Maring folk art and culture are being ignored.

“Without any financial assistance or grants from the government, I have been endeavoring to promote the dying Maring folk culture, folk dance, folk song and theatre art by running a cultural centre on my own. When we are invited for a cultural show outside the state, we raise fund through contribution among the artistes. So far, we have shown varied Maring cultural dances and folk dramas outside Manipur”, he said.

“We hire the local community hall of Sandang Senba Maring village as we do not have our own auditorium where the artistes can freely do rehearsals for dance and folk dramas. For construction of a hall, I have approached the village chief to offer land where a big hall can be constructed. The village chief has shown willingness to my request. However, lack of fund has hindered my dream of constructing a hall of the cultural centre. If government provides me some fund, my dream of constructing the hall would be materialized”, he said.