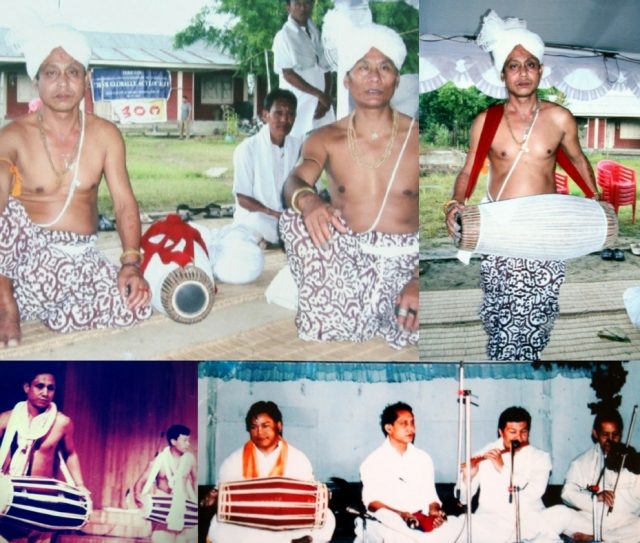 Born in 1965 to Taorem Kulla Singh and Taorem Ongbi Lukamani Devi at Yourabung in Imphal east district, Taorem Yaiskul is the fourth son among six siblings (3 daughters, 3 sons). Brought up in a family of great Nata Sanktitana background, Yaoskul was highly motivated to be a Pung artiste in life. His father and grandfather were renowned maestros of Manipuri Pung tradition.

During his childhood days, many students came to Yaiskul’s house everyday to learn Manipuri Pung under his father.  He keenly observed the activities of the young pung artistes who were undergoing training under his father at their house, which highly motivated the young mind of Yaoskul to learn the art. He used to play the percussion instrument while his father and the students were away from the house for lunch or some works.

On seeing his son’s enthusiasm for Pung, his father once suggested Yaiskul to learn Pung tradition if he really had the passion for it, to which he readily agreed. At his 11 years of age, he started learning the art of Nata Sankritana Pung under his father. Yaiskul, who had inborn qualities and great enthusiasm, showed excellent talent in Pung among his friends.

His association with JN Dance Academy

He started taking part in Nupa Pala and Goura Leelas as a Pung artiste. When he was at class V standard, he admitted in Jawaharlal Nehru Manipur dance Academy Imphal to learn three years diploma courses in Nata Sankritana and could complete the course successfully by winning gold medal in 1976.  That time, dance and Pung were integrated in one diploma course. When Proyogopalsana assumed the post of principal of the academy, Pung and dance were divided into separate courses.

Yaiskul recalled that he did not know how to wear Pheijom properly as he joined the interview for admission in JN Dance Academy to learn Pung at a very tender age. He had to compete with the seniors as there was no classification of age for learning diploma course of Pung. As such, seniors used to enjoy the stipend amount of Rs 100 while he only enjoyed merit scholarship amount Rs 30.

He completed post graduates in Pung and Pung Cholom from the Academy in 1978  and 1989 respectively.

He was awarded certificate of honour for his Pung performance showcased in World theatre day held at MDU hall in 1971. He became the AIR Imphal approved artiste of Manipuri Pung in 1993 and Nata Eshei in 2000.

He worked in the production unit of JN Dance Academy for 15 years and taught Ballad to the students. Currently, he is working as a guru of Pung Cholom.

Yaiskul has set up his own Institute called Guru Kulla Cultural Akademy at his residence at Kongpal Sajor Leikai Imphal East and is giving training to around 40 students in Manipuri Pung tradition. Chakrabiyu, Karna Arjun, Avatar 10 are some of the prominent ballads produced by his institute.

Yaiskul, being a diabetic patient, is living half blinded. He lost his sight in 2011. Despite his health condition, he does not lose his spirit to revive the rare Manipuri art form and still strives to promote the art form by giving training to the young artiste under his Pung institute. His sons and wife are also helping him.

Yaiskul is a father of four children – one son and three daughters. All his daughters are also artistes who are trying to prominent in Nata Sankritana music, Manipuri solo dance and Bharatanatyam.