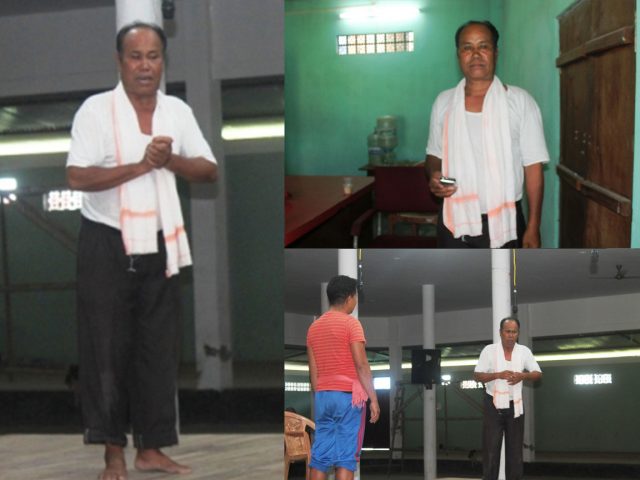 Manipuri people cannot forget the flavor of Ipom, a peculiar Manipuri comedy art which made the audience laugh for years.  With the popular comedy play Ipom vanished after death of  famous comedians like Chaoba, Tombi, Babu etc., comes Nokphade, another genre of comedy series to cater to the ever increasing demand for comedy drama, with new faces of comedians like  Huirem Manglem, Joseph, Rangilal, Kuber, Happy Rajen and Surmangol etc. to uphold the legacy of Manipuri comedy art.

58 years old Keisham Kuber is a multifaceted comedian who have won high public accolades for his funny acting in films, dramas and Shumang Leelas.  He is still popular as Huis Laobi Kuber for his peculiar dialogue “Huis!, Huis!” used in the Nokphade play Khangenphamda Ngairi wherein he appeared as a comedian.  He acted in the role of Baladeva, a henpecked controlled by his wife Radha. The play was dramatized by Ruhinikumar from the play Sorat Kana Solbigani penned by Niladhaja Khuman. No doubt, Kuber is among the comedians who can tickle many audiences through his funny acting.

Born on july 17, 1958 to Keisham Gouramani Singh and Keisham Ongbi  Leirikmacha Devi of Top Khongnangkhong in Imphal East, Keisham Kuber is the youngest son among five siblings (two daughters and three sons) in the family. He passed matriculation from Lamphel High School in 1978 and graduated from Modern College in 1982.

Kuber who had a great passion for writing stories and poetry since childhood, took up proscenium theatre as he felt it would be very helpful in his writing career.

With a view to realize his dream, he joined People Art and Dramatic Association, Top Khongnangkhong. Later on, he was associated with Panthoibi Natya Mandir in 1987 when noted theatre activist Yumnam Rajendra suggested him to work with him (Rajendra).

He could acquire the skill of acting in theatre from Yumnam Rajen. As theatre director Rajen once advised him that theatre is the junction of all art forms and every artist should have the skill of dance, music, martial art, Kuber learnt dance at JN Manipur Dance Academy Imphal for 12 years. He also underwent Thang-Ta training under Keirao Sana.

Kuber said that Ruhinikumar and Yumnam Rajen were the men behind his success in his acting career. My popularity in art was due to Ruhinikumar’s Nokphade while Yumnam Rajen trained me in theatre, Kuber recalled, adding that he still worships the two men.

As a Shumang Leela artiste

He joined Shumang Leela after taking due permission from his theatre Guru Yumnam Rajen who felt a bit set-back for losing one of his prominent theatre artistes. “I saw tears shedding from the eyes of Oja Rajen when I sought his permission. We cried for hours as if we were separated forever”, Kuber sobbed.

Kuber made his debut in the Shumang Leela play Phajabeegi Mapu of North Imphal Jatra Mandal which was staged during Manipur state Shuamng Leela Ningtham Kumhei 2010. He acted the role of a Pung Yeiba (Manipuri traditional drummer) in the play. Then he started acting in other plays including Basantagi Mapao, Loktak, Meet Ani and many others. He is still associated with the party.

A good writer too

Talent of Kuber is not limited to acting only. He is also a writer. He wrote a poetry book Mirang Thuraba Til released in 1985. He also wrote around 43 short stories published in Sanaleibak daily.

Kuber is married and now a father of three kids – Kapil, Kapila and Kripa.

He said that every artiste should dedicate to his profession to achieve success; else he will not succeed in the field.