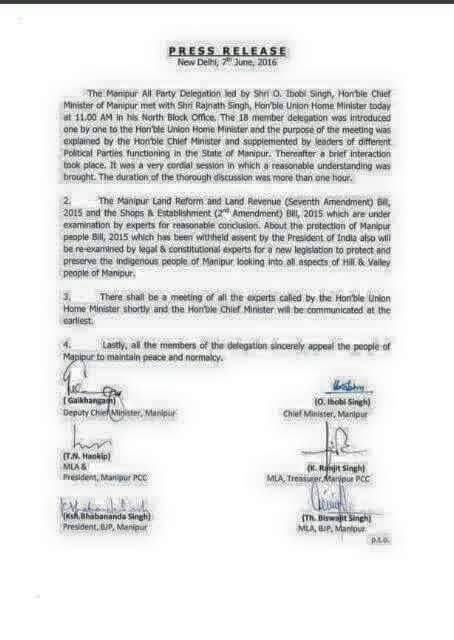 June 7, 2016: The Manipur All Party Delegation led by Shri O. Ibobi Singh, Hon’ble Chief Minister of Manipur met with Shri Rajnath Singh, Hon’ble Union Home Minister today at 11:00 AM in his North Block Office. The 18 member delegation was introduced one by one to the Hon’ble Union Home Minister and the purpose of the meeting was explained by the Hon’ble Chief Minster and supplemented by leaders of different Political Parties functioning in the State of Manipur. Thereafter a brief interaction took place. It was a very cordial session in which a reasonable understanding was brought. The duration of the thorough discussion was more than one hour.

2. The Manipur Land Reform and Land Revenue (Seventh Amendment) Bill, 2015 and the Shops & Establishment (2nd Amendment) Bill, 2015 which are under examination by experts for reasonable conclusion. About the protection of Manipur people Bill, 2015 which has been withheld assent by the President of India also will be re-examined by legal & constitutional experts for a new legislation to protect and preserve the indigenous people of Manipur looking into all Hill & Valley people of Manipur.

3. There shall be a meeting of all the experts called by the Hon’ble Union Home Minster shortly and the Hon’ble Chief Minister will be communicated at the earliest.

4. Lastly, all the members of the delegation sincerely appeal the people of Manipur to maintain peace and normalcy.

Soram Idiyasan Chanu as first author of the research article on Cancer drugs can...