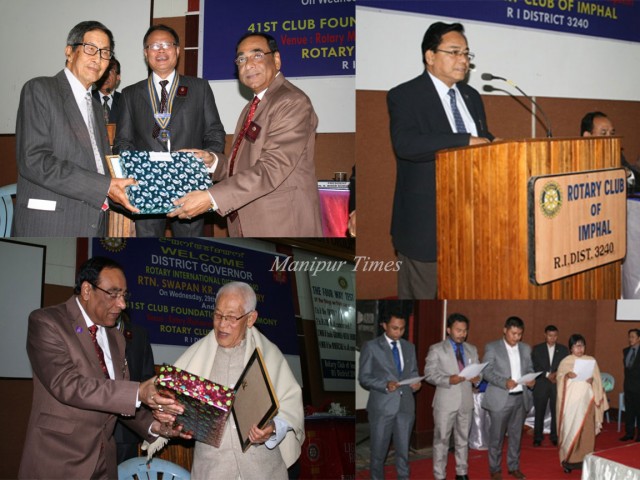 Recognizing their commendable and dedicated service rendered to society as responsible government officers during their tenure, Rotary Club of Imphal, RID 3240 felicitated two senior citizens  of the state on the occasion of the Rotary Club’s 41st foundation day ceremony held at  Rotary Multiservice centre, Mantripukhri here.

Yumkham Saratchandra Singh was born on 29th june 1927. He was the fourth son of his parents ans was fondly called Chaoba by his near and dear ones.  He passed his matriculation from Johnstone High School in 1948 and did his graduation from DM College which was affiliated to Calcutta University by then.

He joined Government service as an LDC and retired from service as senior MCS officer. He was a cordial, tactful commendable and dependable officer. A true honest officer with undoubted integrity, Yumkham Saratchandra contributed a lot for public welfare.

He was a founder member of MSCWA and he still renders contribution for running of an old aged home despite his old age and physical weakness. He is also a member of Shri Govinda Gwal Artee Seva Mandal. H took active role in establishing Lamlong higher secondary school and Lainingthou Awangbam school. He is also related to many other social and religious organizations.

He passed matriculation in 1949 from Johnstone high school and completed civil engineering in 1957 from Bengal Engineering college, Calcutta.

He joined Public works department, Government of Manipur as Assistant Engineer in 1958. With due promotions from time to time, he got retired from government service as the Chief Engineer of PHED, Manipur. During his long service period, he attended many seminars and conferences held in India and abroad. He travelled many countries including USA, Australia, Japan, France, and other south east Asian countries.

He was actively involved in planning and execution of augmentation of Imphal water supply schemes, associated with Planning and Development Authority, Manipur since its inception. Many of the major commercial schemes were planned and completed under his supervision. He also prepared greater Imphal Master Plan (water supply, drainage and sewrage project) and obtained technical clearance from the Ministry (CPHEEO). He also took active part in planning, design and documentation of the present National Games Village.

He was awarded the prestigious 25th Independence Anniversary Medal in civil defence in 1975. As a religious minded man, he has been actively involved in the activities of Shri Govindaji temple board since 1972.

Prizes were also distributed to the topper students of the spot essay and painting competition conducted by Rotary Club Imphal held on September 7 last.

Earlier in the morning, Rotary Club of Imphal, as part of its Community service and Motto ‘Service above self’, doled out various items including Blanket, Mat, Charcoal heater, Towel and other food items to the Old aged home located at Mongsangei and P P Paul Mental Development Home, Mongsangei.

Apart from this, K Binodkumar president Rotary Club of Imphal also donated Rs 10,000 along with a truckload of Brick from his own pocket to enable completion of  the building construction of the Old Aged home while Thoudam Premkumar donated 50 cement bags. Pebam Prem, Laitonjam Kuber from Khurai and W Iboyaima also donated for the inmates with Rs 2000, Rs.1000 and Rs 2000 respectively during the occasion held at Old Aged Home, Mongsangei here. Leihaothabam Gourachandra Sharma, president All Manipur Senior Citizens Welfare Association also attended the function.

Later on, the members of Rotary Club Imphal led by its president and secretary visited the PP Paul Mental development home located at Mongsangei run by All Manipur Mentally Retarded persons Welfare Organisation and donated food items including Rice bags, Edible Oil etc to the mentally retarded children living in the home