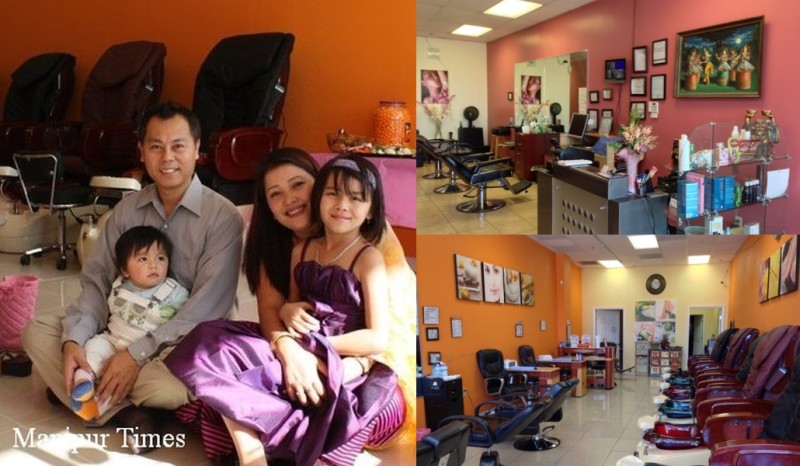 Everyone seeks a job to earn a living but only few think of self employment. People these days are curious and do not hesitate to explore and experiment with their talents. Sameeta Angom is one of those people who took a leap and has been successful and is now a role model to many who wish for a self sustaining life. The business that she runs caters to the beauty industry.

Sameeta Angom, owner of two beauty salons is originally from Sagolband Bijoy Govinda, Imphal, Manipur, and a mother of 2 wonderful kids. She has four siblings, one elder brother, an identical twin sister and one younger brother. A student from Kendriya Vidyalaya, Langing, Sameeta is now a cosmetologist by profession in USA which she never dreamed of. She has been living in Houston, Texas since 2003. Her husband is an IT professional and has constantly supported her in this endeavour. She has a special bond with her twin sister who is currently working as a Scientist at WWI, Dehradun.  The distance does not keep them from talking to each other every single day.

Sameeta, currently a mother of an eight year old daughter and a three year old son started Sameeta’s Spa and Salon in September 2008 and later in 2010 she expanded her business by starting Sameeta’s Nails & Pedispa in Houston, Texas, USA. Before she pursued this, she tried looking to start a career based on her educational qualification.

The moment of glory in this venture is rooted in her native hill state of Manipur. She was introduced to this by her mother-in-law’s friend who ran a beauty salon in Imphal. She was trained for about a month there which she enjoyed a lot. She started out more as a fun activity but soon she took special liking in it. Sameeta has done her M.Sc. in Botany in Jiwaji University at Gwalior. She was going to pursue Ph.D but it somehow did not work out for her. After going back to Houston, she worked in a beauty Salon for about 2 years. During her service, she attended a beauty school to attain a cosmetology license. Without the license she could not run a salon. It was a big challenge for Sameeta who was a mother of a two year old daughter then and wife of an IT professional. She had to juggle working, attending beauty school and family life during that challenging phase of her life. She thanks her husband for helping out during those tough times.

She soon saw a huge potential in the beauty business and she worked harder to improve herself at it. She said that if she has been studying and doing research work she might not have had the flexibility as she now has.

It may have been fate that she did not pursue her Ph.D. and instead started a salon business. Before her venture she was applied for jobs as a teacher in elementary schools and even tried looking for a university where she could pursue her Ph.D. But her interest died down day by day and she constantly grew interested in opening a beauty salon. However starting a business venture in the USA and that too by a foreigner was not easy. The process is filled with tricky regulations and inspection at every point and one mistake can cause a lot of trouble.

Running a salon and being a cosmetologist both require acquiring cosmetology licenses. Sameeta attended a course in cosmetology in a beauty school, which took 1500 hr to complete. She never turned back since then and after 2 years she got the license. The hurdle was that the license had its life span and she had to renew it. Her ambition of running beauty salon of her own was getting nearer and her husband had a big responsibility. Most of the administrative tasks (accounting, taxes, utilities rate negotiations, lease negotiations, dealing with contractors during construction phase etc.) are performed by her husband. The cooperation of her husband played a big role and responsibility in the success of the two salons.

Sameeta’s Salon provides a variety of services like threading, facial and skin treatment, hair cut, hair care, nail care, eyelash waxing etc. And among the services provided, the most popular service is threading as it take very little time and labour. Indians, Pakistanis, Americans, Spanish/Hispanics and African Americans etc. forms the bulk of the Salon’s clientele.

Her salons offer discounts on services on Mondays and Tuesdays. She even rushes to the local radio station to air advertisement on her salon and special services or discounts when available. Busy days at the salons are on Friday and Saturday which usually are good business days. Holidays, Christmas and New Year are peak seasons in her salon. She needs extra hands at times apart from the 8 women she employs at two locations. She treats them as family and provide a room of comfort for healthy working environment. Even if someone takes a day off from work, the remaining employees adjust among themselves to maintain work in the two locations which are in the same building.

Sameeta’s Salon employs licensed esthetician for facial waxing and eyebrow treatment, cosmetologist for skin care and licensed operator for all skin, hair and nail care jobs. Eyelash treatment is done by her. They work on all days from 10 am to 7 pm but she leaves her salon at 3 pm for her children. She fetches her children from school before 4 in the evening. She is the only Manipuri woman who is running a salon business in Houston. It was tough for her initially when she started her business as she had oriental looks. But her conviction to make customers trust her made her achieve. She is often asked if she is a Mexican, a Chinese or a Filipino and she always replies by saying ‘I am Indian’. She emphasizes on giving the best customer service possible at her salons. Some customers even drive 45 minutes to get a service from her salon and the trust is due to the hospitality and hygienic environment provided in her salon.

She recounts incidents such as these in her business where a customer with very thin eyebrows came in with the request to make them thick as if they had the power of Mida’s touch. She has had the privilege of styling Bollywood playback singer Shreya Ghosal’s hair for her show in Houston. Her son was only 3 months old then, but she had to do her work at Hilton Hotel as Shreya was staying there. She left her son with the Nanny while she and her husband went to the hotel to take care of the logistics. She admits that it is a challenge to juggle family life and her salon business, but she has been able to overcome adversities to make this venture a success.