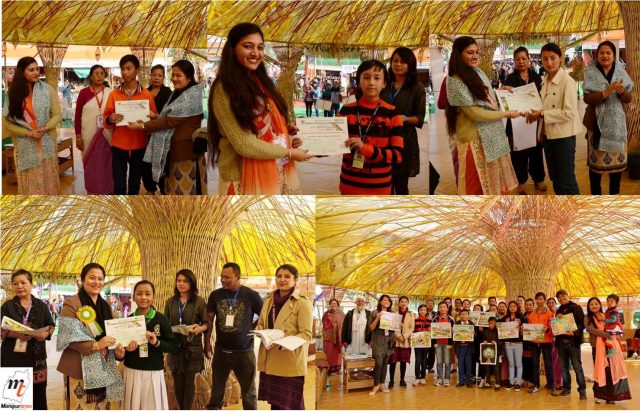 The prize distribution ceremony of successfully concluded Sangai Youth Art Challenge 2016 was held on the concluding day of Sangai Festival 2016 at the pavilion of the fest main venue, Hapta Kangjeibung, Palace Compound . All together 12 young artists were felicitated along with the participants. The winners were given attractive cash prizes and certificates. Encouraging the participants, they were given participation certificates along with painting kits like colours, pencils and the likes of.

Director of Tourism Department, Ms Bandana Devi felicitated the winners and participants along with Ms Jaspreet Kaur, Under Secretary, Tourism Department, Government of Manipur and Ms Mehnaz Nasreen, Founder Editor, Youth Street News. The Director congratulated the winners and also interacted with them about their art they painted at the Sangai Youth Art Challenge. She also told the young students to visit various student oriented exhibition at the Sangai Festival such as Planetarium and Art gallery for enhancing their knowledge.

It is to be noted that more than 150 young students from different parts of Manipur participated in the Sangai Youth Art Challenge 2016, a painting competition which was held on 13th November, 2016 as a pre-event to the state biggest tourism festival-Manipur Sangai Festival 2016.