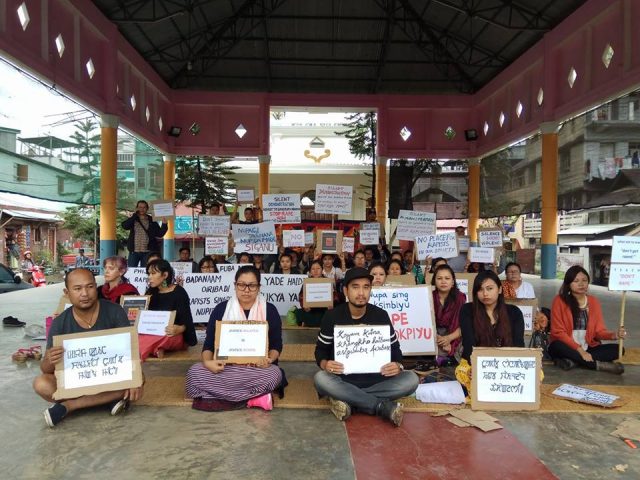 Imphal: In the wake of the fateful incident that happened on the 14th of April where six young men including juveniles gangraped two minor girls at Imphal East District, a group of individuals staged a silent demonstration at Keisampat Junction today.

Around a hundred individuals from different walks of life gathered and addressed their infuriation against the heinous crime perpetrated against the minors.

The people who came out on the streets expressed their resentment on the untoward blaming of the victims ignoring the trauma the minors are going through and requests the media fraternity to be sensitive while reporting similar cases. With the increasing number of crimes perpetrated on girls and women, we have to introspect as a society and be proactively engaged to create a safe space for survivors who are otherwise unable to report their complaints due to fear of stigmatisation and fear of their complaints being ignored. Newspaper reportage have evidenced that the accused are young juveniles and it is alarming why our children have become so dehumanized and utterly odious to commit such abominable sexual violence. As concerned citizens, we feel it is time to critically look at the values a d education imparted to our young minds not just in the schools and colleges but also in the families and society at large. We have to stop blaming the victims and help them transform into survivors above this experience they have been subjected too and while doing so include our young men to enlighten them on gender based violence and engage in healthy dialogue with them with the help of parents and educators alike. We are submitting a memorandum to the chief minister and the concerned departments to take the necessary actions and not delay the justice mechanism as the public is optimistic towards the new government.

Today, 23rd April 2017, a group of concerned citizens of Manipur came together in Imphal voluntarily to hold a silent protest demonstration against the April 14 gangrape in Imphal East where six men gangraped two minor schoolgirls.

This heinous incident comes one year after the Feb 2016 Ngairangbam gang rape case. We are noticing an alarming increase in sexual violence perpetrated against girls and women of Manipur.  This is highly unacceptable and the people of Manipur cannot become complacent to this.

The case is being followed and reported daily in the papers and we are becoming more aware of what transpired on 14th April and thereafter. We stand with the two young survivors and their families and extend our unconditional support and solidarity to them. The accused rapists and one accomplice should be given the most stringent punishment as per law.

We hope and believe that you will personally look into this grievous incident and further hope that your esteemed office will direct the concerned departments of your government to take appropriate and swift actions.

Enclosed: List of signatories to the memorandum and testimonials of those who attended the silent protest.