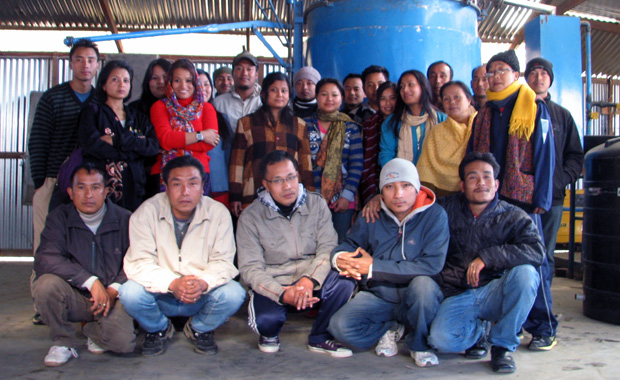 “I failed many a times but I never gave up. I learn something new from my failures which enable me to rise up with bigger plan and strategies.”

This is the success story of 37 year old Ragesh Keisham, Chairman and Managing Director of Sui Generis.

Earlier Ragesh has tried two companies, one for Data digitization and another for extraction of bio-diesel from Jatropha plant before he come up with“Sui Generis”in the year 2006.

He tried to find out the causes and reasons for his failures and change his approach and came up with new planning.

In the wake of his failure, he queried himself as to why Manipur is known as ‘Sanaleibak’ or ‘Sanagi Marum Kokpi Uchek’ and assume that it might be because of its fertile soil and its yielding potential. Since then, he had a faith that if he establishes an agro-based industry, he will be a successful entrepreneur. Thus, he started focussing on agro-based industry.

During the processofsetting up the industry, he met Dr. M. Ahmed, who is a scientist in NEDFI. There, the scientist suggested him to plant CymbopogonFlexious, one of the species of Lemon Grass.

Accordingly, he planted it in his kitchen garden to test whether Cymbopog on Flexioussuits the soil. As the plant grewwell in the soil, he bought ten thousand saplings of Cymbopog on Citratus, another species of Lemon Grass from Indonesia through one of his friends and planted them at his farm located at Leimakhong. After witnessing the rapid growth, hestarted plantingthe same plant in large scale at Nongmaiband, situated at the foothill of Baruni, in an area of 20 acres.

While planting Cymbopog on Citratus, his initial motive was to extract oil which is known as citronella oil from the leaves and stems of the plants. As he faces financial burdens, he applied loanfrom State Bank of India in order to procure a machine known as Hydro Distillation Machine, for extracting oil.

He got disappointed and started searching for other purpose of the plant instead of oil extraction. One day, when he searched about the use of the Cymbopogon Citratus on the internet, he came to know that this particular plant is used to control fever in Brazil. From that moment, he thought of exploringthe plant to use as tea. He did a lot of research works before he launched the Cymbopog on Citratus Tea, CC Tea onAugust 21, 2011. From the experiment, he learned that this plant is useful for health as it helps in curing ailments like constipation, indigestion, stomach ache etc. and keeps the eyes and skin healthy.

Before he launched CC Tea in the market, he did many successful experiments with good response from the people.

At present Sui Generis is employing 55 people consisting of workers, separators and technicians.  Apart from this, the company is giving employment to nearly 500 persons indirectly. As stated by Ragesh, the company is keeping a target to employ at least 5000 people of Manipur in near future.

Packaging of the tea bags is regarded as the most precious gift from Manipur to the whole worldby Sui Generis as pictures of ‘Loktak Lake’, ‘Sangai’,‘Hiyang Tannaba’, ‘Nong-een’, ‘Sirui Lily’ or ‘Dzuko Valley’ are marked on it. This is done to promote tourism and to tell the outside world that Manipur a beautiful land worth visiting exist.

As of now, the Cymbopogon Citratus is planted in about 50 acres field situated at different places of Manipur. In the coming years, the company is planning to expand its business and area of plantation to 75 acres.

Once the Cymbopog on Citratus is sowed, it can be harvested after four months for the first time, then after every three months simultaneously.  In order to extract the CC Tea, the harvested plant is separated from unwanted grass, cleaned and then washed. Later the washed plant is allowed to dry in the drying machine. Dried pieces are cut into smaller pieces and made ready for packaging. It is again finally separated before packing. All these processes are done in a factory.

The finished products are marketed by its marketing agencies called ‘‘Humang-mal Links’’, ‘’B and B Marketing’’,’’ K.S. Distributor’’, ‘’D.R.R. Traders’’ and ‘’Goodwill Marketing’ ’These marketing agencies distributed the products in the local market. The company can dispatch 30,000 products in a month time at present. Two otheragencies are coming up with a plan to distribute the products outside the State. In the near future, it will be exporting the product to other countries of Europe, America and Middle East.

He feels that the market of tea in the world is very vast while adding that if they are able to capture at least 1% of the big market of the total 46 million tonne worldwide, the company can generate crores of Rupees in revenue.

Moreover, CC Tea is associated with a social cause as it is contributing one rupee each on every sale of a packet to tackle global warming issue.

The cartons used for packaging the product is imported from Delhi. But its cover look is design by the designer of the company itself. To enhance the packaging process, a packaging machine will be installed in the factory itself shortly.

Ragesh who graduated from Pune University in the year 1997 worked in different companies in India. He also completed Executive MBA course while earning.

Ragesh wishes to change the mentality of many parents of the State towards shaping the future of their children. ”If we do not change and rectify certain mentality in our society, we cannot bring a change in Manipur” he observed while appealing to every sections of the society to encourage youths of the State to land in the field of entrepreneurship.