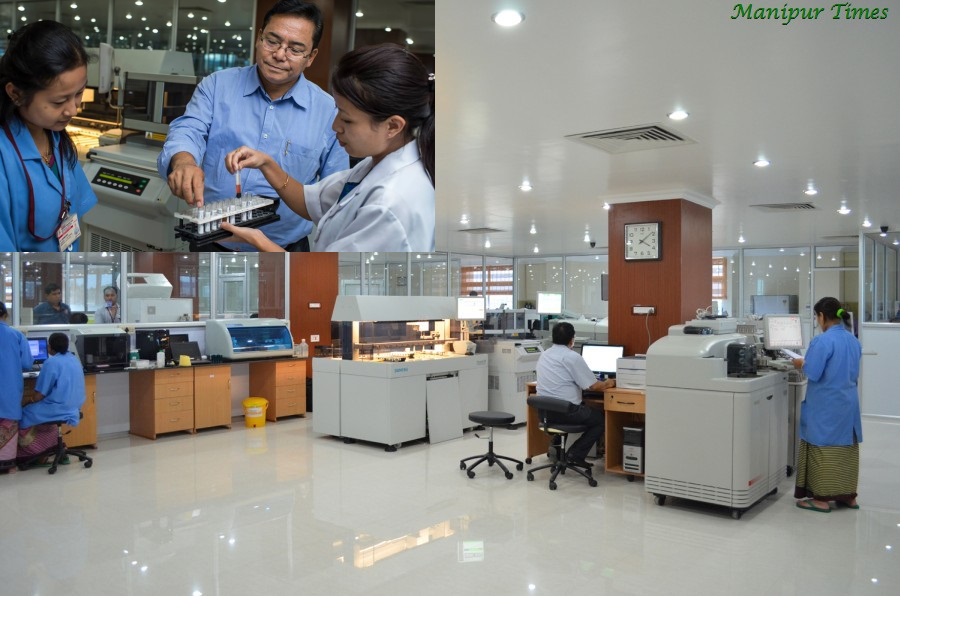 The BABINA Diagnostics building at Soibam Leikai, Imphal East is a swanky modern-looking structure juxtaposed against the scenic background of the rapidly developing Imphal East. A step inside the walls of the compound reveals an expansive view of the campus with beautiful flowers grown all around and a stylish cafeteria. The glass façade of the building is sparkling clean which compliments perfectly with the spacious and spotlessly clean campus. One instinctively reaches for the mobile to take a photograph of the marvellous view. Inside, the floors are squeaky-clean and so are the walls. The staff seem well-groomed and are polite. Everything about BABINA Diagnostics is neat and orderly.

BABINA Diagnostics is a perfect extension of the man behind it all – Dr. Thangjam Dhabali Singh. Every aspect of this premier diagnostic centre reveals the character of the man himself. That BABINA Diagnostics today, is one of the largest diagnostic centres in the entire country is no mean feat. It has taken more than 30 years of toil and sweat to become what it is today.

“I grew up in a not-so-well-to-do family”, Dr. Dhabali Singh says matter-of-factly. Fifth among ten siblings in the family, Dr. Thangjam Dhabali Singh was born in Imphal on 1st January 1956. He studied in the prestigious Johnstone Higher Secondary School in Imphal and completed MBBS in the year 1977 from Regional Medical College, Imphal (the present RIMS). He completed his post-graduation (MD) in Pathology from PGIMER, Chandigarh in 1982. After serving at PGIMER as Senior Resident, he joined RIMS, Imphal as teaching faculty member. Having served for many academically fulfilling years in RIMS, he voluntarily retired from service as Associate Professor in the Department of Pathology in 1994. Since then, he has been working fulltime as Laboratory Director of BABINA Diagnostics, Imphal and under his watchful guidance, BABINA Diagnostics grew into one of the biggest and best-equipped medical diagnostic laboratories in Eastern India.

Driven by the passion for laboratory work, Dr. Dhabali Singh set out to establish his own pathological laboratory in a nondescript building in BT Road, Imphal near Rupmahal Tank in 1983. As revealed by the man himself, BABINA Diagnostics (back then, it was known as BABINA Diagnostic Centre) started off with an amount of just Rupees twenty thousand for equipment and other things. Dr. Dhabali fondly recalls the days when the technicians used to perform almost all tests manually on simple machines. The medical diagnostics sector in those days in Manipur, as in other parts of the country, was still in the elementary stage. Samples had to be sent to laboratories in Kolkata and elsewhere for even the most basic tests. BABINA Diagnostics was the first medical laboratory in the state to be run by a Pathologist. Even during those days, what set BABINA Diagnostics apart from the rest was its commitment to quality. It soon carved out a reputation for itself in the healthcare service in the state.

From early on, Dr. Dhabali Singh realised that the evolution of medical diagnostics and technology were intertwined and that it was important to keep up with the rapid strides in medical technology. It is interesting to note that BABINA Diagnostics incorporated the computerised reporting system as early as in 1986. Dr. Dhabali reveals that he himself was actively involved in writing the algorithm for the program that was adopted for the system. The centre was one of the first diagnostic laboratories in the entire country to adopt such a system. This innovation was the precursor to many more innovations later on and set the tone for what would become a distinctive characteristic of BABINA Diagnostics – technological change and up-gradation.

Due to space constraints, BABINA Diagnostics shifted to RIMS Road (not the present location of its present branch centre) in 1993 and very soon installed Ultrasound machine. With the addition of X-ray, ECG and CT scan later on, it soon became a multi-disciplinary diagnostic unit by the end of the nineties. To facilitate better service and to bring in more efficiency, BABINA Diagnostics incorporated the Laboratory Information System (LIS) in 2003. This paved way for sample bar-coding and machine-LIS interfacing which was unprecedented in the state. With the installation of MRI machine in 2005, the centre became a truly multifarious diagnostic centre. The BABINA Diagnostics brand had been firmly established.

BABINA Diagnostics achieved the rare distinction of becoming the first medical laboratory in the entire Northeast to be accredited by National Accreditation Board for Testing and Calibration Laboratories (NABL) in 2007. Stringent as the rules and regulations of NABL are, the accreditation is an acknowledgement of quality of its test reports and overall service. It is matter of pride for the people of the state too.

It is an understatement to say that BABINA Diagnostics ushered in qualitative changes in healthcare of the state. Today, it is one of the best-equipped diagnostic centres in the entire country. Many equipment installed in the centre are the firsts in the country. BABINA Diagnostics continues to raise the bar higher for quality service. With more than ninety collection centres in Manipur and other states of the Northeast, BABINA Diagnostics is certainly one of the leading healthcare service providers in the region. Besides these, it has two joint-venture units – each in Kohima and Shilliong, and a branch unit in Guwahati.

Being a workaholic himself, it is no wonder that Dr. Dhabali says, “I admire people who are hard-working.” He likes playing Table Tennis and was a good player in his college days. He loves listening to music and often watches Hollywood action movies. According to him, the most beautiful place in Manipur is the Sendra in Moirang. Incidentally, as luck would have it, recently The Classic Hotel has been entrusted with by the Manipur government to develop the site. Rechristened “Sendra Park and Resort by The Classic”, the place is now an attractive tourist spot and has restored the scenic beauty of the Loktak Lake.

BABINA Diagnostics alone currently employs around 300 staff. This is significant in the backdrop of the acute unemployment problem of Manipur. Dr. Thangjam Dhabali Singh is a recipient of

Dr. Thangjam Dhabali Singh is an able administrator and a thoughtful entrepreneur. He is a visionary in his own right and everything he does, has the distinctive stamp of class and brilliance. Although he has worked in different capacities for the state, people hopes to see lot more ventures from him in the future too.