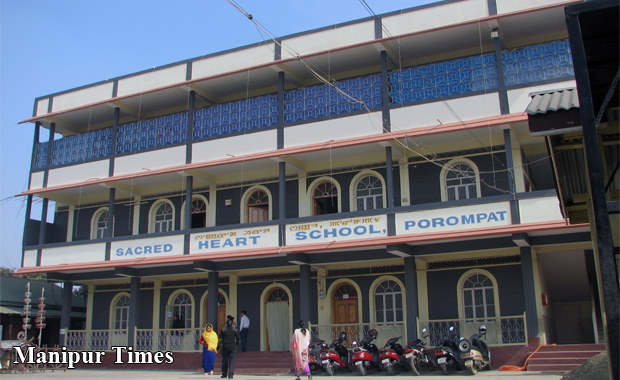 With just 30 students from Kangla Sangon Shang Imphal East I began my School in a rented building at Lamlong Bazar. It was in the year 1990 says Rabichandra founder and director of Sacred Heart Higher Secondary School.

Twenty one years after, Sacred Heart Higher Secondary School is now educating 1500 students. With the help of loans from the Imphal Urban Co Operative Bank for a second time the School is having a separate buildingfor the Higher Secondary Section at Porompat around Imphal Doordarshan Office.

Rabichandra has given a consistent effort in the progress of the school. For the last 22 years he has been striving for every improvement and he feels really glad to realise the success at this time.

In the last HSLC Exam conducted by BSEM, 42 students scored first division, 36 second division, 2 third divisions, 1 absentee and a single student unable to clear HSLC Exam. The school administration encourages its student with cash prize every year for the first division holders and students’ securing letter mark in board exams.

His association with many social works in the past had helped him in some way or the other for the growth of the school. At a time when mission schools are regarded as the best schools in the State many parents wants their kid to study in such schools. However the growth oflocal private schools with good infrastructure and excellent teaching methods seems to catch the attention of many parents. Sacred Heart Higher Secondary School is among one of them. The mighty resource of good teachers in the State could be term as one factor behind the growth of successful schools. The competition is fast track among various private schools.

Sacred Heart Higher Secondary school at Porompatwhich runs with the motto of truth and sacrifice has 50 teaching staffs and 13 non-teaching staff including the security guards.

Consistency and able approach towards the development of a good school is one big factor a school administrator should possess and it seems Rabichandra has made it. Quite clean and careful looks, he sits in his office room meeting students, teachers and interacting parents. His ultimate subordinates Principal, Vice principal, higher section supervisor and lower section supervisor taking their own roles. Loaded with annual events like the science seminar, literary meet song and dance competition on patriotic theme, cultural dance competition, sports meet keeps the student bright and smart.

The school tops the Imphal East District level Science Seminar this year and the last year. Hijam Irabot Memorial recognition of 7 best schools for the year 2012 listed Sacred Heart Higher Secondary Porompat and 4 students from the same school got the HIM Ideal Award for students among 10 best students selected from various competitions like quiz by the memorial trust during September 2012.

One good aspect of the school is that parents are also encouraged in the annual merit award ceremony along with the students which enhancesgood environment for education in the society.

“My father was a teacher. I also took up the teaching profession and became headmaster in Jalil High School Khergao for three years. In between, I studied Law and became a registered lawyer under the Guwahati High Court. However I decided to pursue my career as a school administrator “ Rabichandra often quote on his passion for running School.

On infrastructure the school has two sections one at Lamlong and another at Porompat till 2004 from 1999 when it acquire a plot at Porompat near DDK Imphal Office in1996. It also runs separate hostel for Boys and Girls with 30 capacities each. Students from Moreh, Ukhrul, Serou, Kumbi, Moirang and other places are enrolled in the hostels for studies.

3 buses run by the school picks up students from 25 kilometre distance radius of Imphal East from the School the end points are Chanung, Saijang etc. 20 private vans bring in students from Irilbung, Congba, Babupara etc.

The school also teaches thang ta martial art to its student from 5th standard. The initiative is from the association of school and is practice in few schools with the aim of keeping the traditional values among younger generation with health values. Olivia a class vi student and another boy clinch gold medal in the 2011 State Level Thang ta competition with two more students achieving a silver and bronze medal. The competition was organised by HuyelLanglongThang Ta Association Manipur.

Students from the school have also achieved in the field of Art and Culture by winning the All India School Dance Competition held at Bhopal and organised by Indira Gandhi RastriyaManavSangrahalaya in the year 2000.